It seems like it's been a while since Snap or Snapchat or whatever it's calling itself these days has made big news. It wasn't all that long ago that the app was the hottest thing out there. Maybe it still is and isn't on my radar. One person that has benefitted greatly from Snap's popularity is its founder Evan Spiegel. A lot of hard work and sacrifice goes into a successful startup. Along the way, Spiegel also managed to become a billionaire, fall in love with and marry a supermodel,  have two kids, and buy a $12 million, 7,164-square-foot house that was previously owned by Han Solo himself, Harrison Ford. He's got $2.5 billion reasons to smile and he's not even 30 yet. Yes indeed, it must be good to be Evan Spiegel.

Spiegel will turn 30 on June 4th. He's a native of Los Angeles.  Both of his parents are attorneys. He grew up in posh Pacific Palisades and attended the Crossroads School for Arts and Sciences in Santa Monica. Crossroads is a private school that is popular with the entertainment industry crowd. Other alums of the school include Zooey Deschanel, Jonah Hill, Jack Black, Michael Bay, Gwyneth Paltrow, Maya Rudolph, and a trio of former reality stars – Whitney Port, Spencer Pratt, and Stephanie Pratt. While Spiegel was in high school he took design classes at the Otis College of Art and Design. The summer before he left for college he took classes at Pasadena's Art Center College of Design and had an unpaid internship in the sales department of Red Bull. 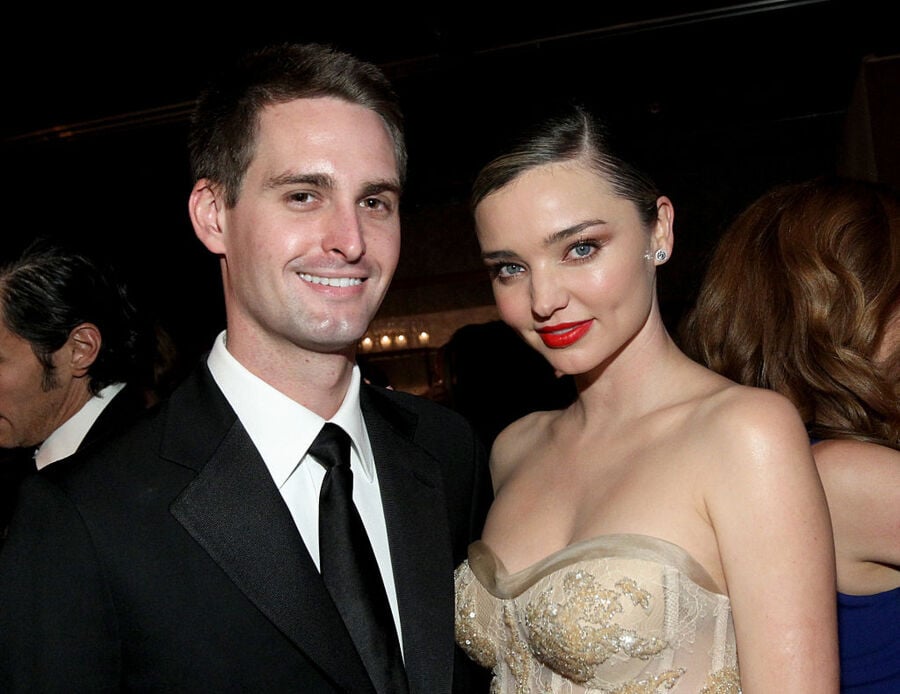 After his K-12 experience at Crossroads, Spiegel headed north to Palo Alto and Stanford. He joined the Kappa Sigma fraternity. He had a paid internship at a biomedical company and at Intuit. He also spent some time in Cape Town, South Africa working as a career instructor. Spiegel studied product design at Stanford. In April 2011, he proposed an app with disappearing messaging in one of his product design classes. His classmates ridiculed him and his idea but Spiegel was determined to see it through. He worked with fellow Stanford student Bobby Murphy and Reggie Brown to launch Picaboo, which they later renamed Snapchat. The following year, Spiegel left Stanford and returned to Los Angeles to work on Snapchat. By the end of 2012, Snapchat had one million daily active users.

By 2014, Spiegel was a billionaire. He was 25 years old. Snapchat rebranded itself Snap and went public in March 2017, making Spiegel a multi-billionaire. At one point, his net worth topped $5 billion. And then the stock price fell. By July, shares were down 30% and shaved billions off Spiegel's net worth. And then the past came back to haunt him.

Reggie Brown came up with the idea for a sexting app in the summer of 2011 and shared it with his friend Evan Spiegel. They realized pretty quickly that the idea was going to be a very, very big deal. They brought in their friend Bobby Murphy to code the app. All was well. The friends were excited. And then Brown overhead Spiegel and Murphy plotting to cut him out of their business. But Brown had ammo. He had possession of Snapchat's patent documents. And he was not going to hand them over without a fight. Spiegel and Murphy had to pay Brown to go away. And that didn't come cheap as Brown sued Snapchat for his share of the company. Snap Inc. settled with Brown for $158 million.

On a personal front, Spiegel and Australian model Miranda Kerr started dating in 2015. They got engaged in July 2016 and married in a private ceremony in Los Angeles on May 27, 2017. Their first child together, Hart Kerr Spiegel, named after Evan's grandfather, was born on May 7, 2018. Their second son, Myles Spiegel, was born in October 2019. Kerr also has a son with her ex-Orlando Bloom, born in 2011.

Being a billionaire, husband, and father wasn't enough for Spiegel though. He had one more thing to do: finish college. In July 2018, he revealed that he had gone back to complete his degree requirements at Stanford and officially graduated. Why did he do it? It's not like he needed his degree at this point. His son Hart (he only had one at the time) was his motivation to finish college. He wanted to finish school so that he could inspire his son to graduate from college as well.