Li Ka-Shing, the richest man in Hong Kong, is taking a page from the book of Robert F. Smith. On June 16th, his foundation announced that the incoming fall 2019 class of Shantou University will not have to pay a single dollar towards their tuition. Even better, students have up to five years to complete their studies and have Li Ka-Shing foot the bill. Li Ka-Shing, who recently retired, has a net worth of $29 billion. Footing the bill for the incoming class of students at Shantou University will cost him $14.4 million a year.

Li Ka-Shing is deeply committed to his charitable foundation. He has called it his third child in the past. This latest pledge is part of an ongoing initiative to make higher education more accessible across China.The 90-year-old billionaire has a true rags to riches story. He was forced to quit school at the age of 14, after his father died, to work as an apprentice in a factory that made plastic watch straps. In 1950, at the age of 22, Li quit his job to start his own company that made plastic toys. The company soon shifted plans and instead began producing plastic flowers because he heard how popular they were in Italy. It was Li's first savvy business decision. He named this company Cheung Kong. 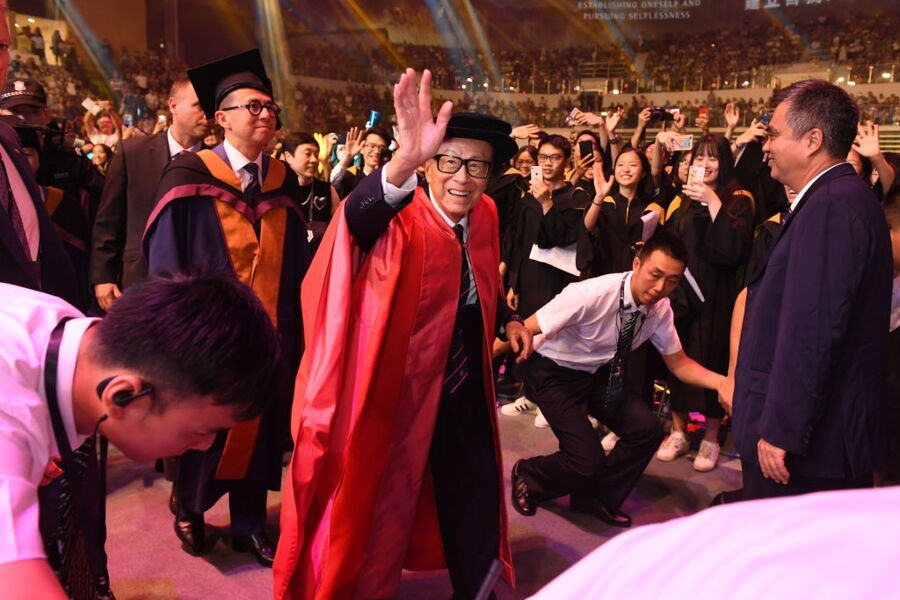 Around this same time, Li began buying apartment buildings and factories throughout Hong Kong with every extra penny he managed to save. Because this was a period of severe social unrest marked by Maoist-led riots and bombings, Li was often able to purchase real estate at steep discounts. By the time the market recovered from the social instability, Li started to make a killing. In 1979 he became the first Chinese citizen to acquire a controlling stake in an old British trading house, Hutchison Whampoa.

Because Hutchison Whampoa had been struggling for years, Li shrewdly convinced Hong Kong & Shanghai Bank (HSBC) to sell him their 22% stake in the company for less than half the book value. Hutchison Whampoa owned shipyards, docks, vast parcels of retail space and much more, mainly throughout Hong Kong. Over the next decade, Li managed to successfully turn Hutchison Whampoa around and expand its empire throughout the world. Today, the company, now called CK Hutchison, is one of the most valuable companies in the world with annual revenues of over $20 billion. Li retired in May 2018.

Li has had ties to Shantou University for some time. He was the honorary president of the school until June 2018, when he passed that title down to his son Richard Li Tzar Kai. The school has 10,056 undergraduates. Tuition is $8,690 per year.

This announcement is a month after American billionaire Robert F. Smith pledged to pay off the student loans of all 400 graduates of Morehouse University's class of 2019. It is a growing trend. Last year, Ken Langone, the co-founder of The Home Depot, pledged to pay the tuition for every student at NYU's medical school.