By Amy Lamare on January 3, 2019 in Articles › Billionaire News

It is the end of an era at Southwest Airlines. Herb Kelleher, the co-founder and longtime CEO of the airline has died at the age of 87. Southwest Airlines released the following statement regarding Kelleher's death. "Herb was a pioneer, a maverick, and an innovator," the company said in a statement. "His vision revolutionized commercial aviation and democratized the skies. Herb's passion, zest for life, and insatiable investment in relationships made lasting and immeasurable impressions on all who knew him and will forever be the bedrock and esprit de corps of Southwest Airlines."

Kelleher was born in 1931 in Camden, New Jersey. He grew up in Audubon, New Jersey and graduated from Haddon Heights High School. He attended Wesleyan University as an English major and Philosophy minor. He was a member of the Delta Kappa Epsilon fraternity. He got his law degree from New York University. After law school Kelleher and his wife Joan moved to Texas with the plan to start his own law firm. Kelleher and one of his legal clients Rollin King came up with the idea that would eventually become Southwest Airlines on a cocktail napkin in a restaurant in San Antonio in 1967. Or at least that's the official myth of the origins of the company. 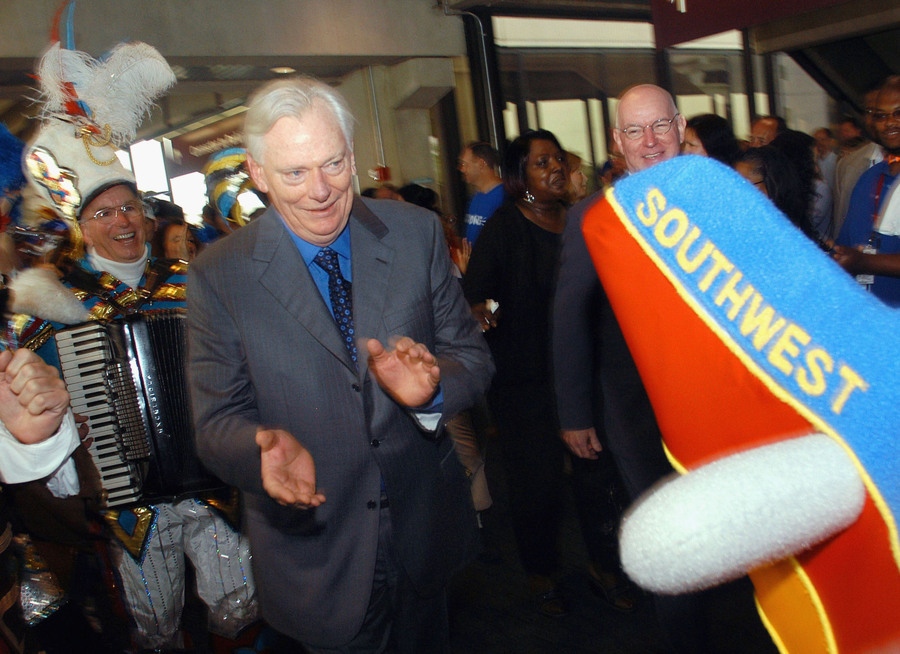 Kelleher and King faced four years of legal challenges from competitors who tried to keep the fledgling airline from taking to the skies. From the beginning, Southwest offered the strategy of low fares by eliminating unnecessary services and avoiding the hub and spoke scheduling system used by other airlines. Instead, Southwest built its traffic by flying into and out of secondary airports such as Chicago's Midway rather than O'Hare and Orange County rather than LAX. Southwest's first flight took place on June 18, 1971. The flight was from Dallas to San Antonio. It had ten paying customers on board.

Reportedly King laid out his plan for a proposed route system that was a simple triangle that linked San Antonio, Dallas, and Houston. Kelleher allegedly said, "Rollin you're crazy. Let's do it." Whether this legend is true or not, the route system it described did become reality. Southwest's first flights did link Dallas to San Antonio and to Houston. The third leg, San Antonio-Houston, began five months after the first flight.

Kelleher's mantra for Southwest has always been: simple and fast. Southwest is the only airline in the U.S. that won't make connections with other airlines. Southwest's flights are not a part of travel agents' computerized reservation system. Southwest's flights don't come up in online flight search engines like Expedia or Google flights. Kelleher refuses to pay the fee for the privilege. Southwest's tickets can be bought on their website, on their app, or by calling them.

Kelleher was CEO of Southwest Airlines from September 1981 to June 2001. He was Executive Chairman from March 1978 to May 2008. During his tenure as CEO, his colorful personality created a corporate culture at Southwest that made the airlines' employees well known for their lighthearted approach—often singing flight announcements and telling jokes to passengers.

In March 1992, shortly after Southwest started using the motto "Just Plane Smart," Stevens Aviation, which had been using "Plane Smart" as their motto threatened to file a trademark lawsuit. Instead of a lengthy court battle Kelleher and Stevens Aviation's CEO Kurt Herwald took place in an arm wrestling match, which came to be known as the Malice in Dallas, to settle the dispute.

Over the course of more than four decades as the colorful and outspoken head of the Dallas based airline, Kelleher transformed the airline business in the United States. Over the years, Southwest has grown into the largest domestic airline in the U.S. It has been profitable every single year, despite the airline industry's notorious boom and bust nature.

Longtime Dallas Morning News writer Terry Maxon covered Kelleher and the rise of Southwest Airlines extensively during his career. When he retired in 2015, he wrote about Kelleher's outgoing personality and how he shaped one of Dallas' most important business industries.

"Everybody who meets Kelleher is instantly his friend. He leans in, offers an observation, a confidence, then lets go with his big, drawn-out laugh, a-HAAA-HAAAA-ha! You tell something halfway funny, he rewards you with another a-HAAA-HAAAA-ha, ending only when he runs out of air. For the time you spend with Kelleher, you're the only one who exists. You're his best friend, the person he'd rather be talking to than anyone else in the world. You're awash in the glow of his admiration. And the thing is, it's real. Herbert D. Kelleher is genuine. I've covered airline executives who exuded good will and camaraderie, but it was just a façade for the moment, a role they had to play. Herb Kelleher roams the world looking for people to greet, hug and shake their hands — and make another best friend."

In the mid-1980s Southwest's TV commercials featured him. He was the brunt of the joke in the series of ads. He missed his plane, tried to use an expired credit card, and claimed credit for the airline's success to the dramatic eye rolls of employees.

Kelleher would do almost anything to promote Southwest Airlines—as long as it was different. He dressed up as Elvis Presley, a woman, the Easter bunny, a leprechaun and a flight attendant and walked through airports. He had his planes painted to look like killer whales.  He performed rap songs on training tapes. He schmoozed employees at work and crowds at cocktail parties. He was genuine.

Herb Kelleher is survived by his wife Joan, whom he met on a blind date during college. She is from San Antonio and was the impetus for Kelleher's move to the Lone Star state. He is also survived by his four children. Herb Kelleher had a net worth of $2.5 billion at the time of his death.