When George Lucas Sold Star Wars To Disney, He Took Half Of The $4 Billion Buyout In Stock. That Was A Smart Choice…

By Brian Warner on March 10, 2021 in Articles › Billionaire News

I sincerely hope everyone reading this article will someday find themselves in the position to sell a company for a life-changing amount of money. If you do find yourself in that position, there's a decent chance you'll be debating whether you should sell for cash or stock. It's a tough call. If you're selling to a publicly traded company with a reputable track record, accepting stock might not be a bad decision. But even selling to a publicly traded company with a stellar performance record can be risky. Take Mark Cuban. When Mark Cuban sold Broadcast.com to Yahoo in 1999, the deal was for $5.7 billion in Yahoo stock. Not a dollar in cash. On the day the deal closed, Yahoo stock was trading at $163 per share. About a year and a half later a single share of Yahoo traded for $8. The reason Mark Cuban is a multi-billionaire today is because he dumped 100% of his shares on the very first day his six month lock up expired. Mark was lucky and smart. A thousand other dotcom entrepreneurs weren't so lucky or smart.

Long story short, no one will ever fault you for taking cash. Cash, as they say, is king. However, there is one other option to consider. To hedge your bets, you could request half cash, half stock.

That's what George Lucas did when he sold out to Disney. And boy was that a good call in retrospect! 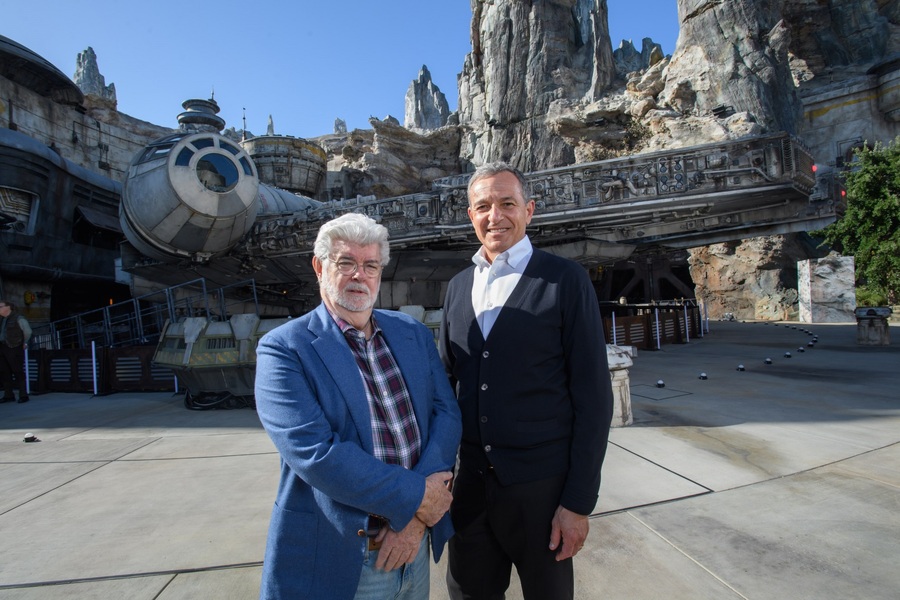 How Did George Lucas Own 100% Of Star Wars In The First Place?

[***If you've read our article "How One Brilliant Decision In 1973 Made George Lucas A Multi-Billionaire Today", the following paragraph may be old news. But it's worth explaining some history before we get into the Disney deal.***]

George Lucas wasn't exactly a film industry titan back in the early 1970s. First off, he was just 28 years old in 1973 when he pitched a "western set in space" to 20th Century Fox executives. Secondly, what eventually became "Star Wars" was only the THIRD movie that would be directed by Lucas, following 1971's "THX 1138" and 1973's "American Graffiti".

George did have a bit of clout though. "American Graffiti" wound up becoming one of the most-profitable movies of all time, eventually earning $140 million off its $777,000 budget.

But even with this enormous success in his pocket, George was still not in a position to tell 20th Century Fox executives that he needed $11 million – 15 times his previous budget – for a weird space movie, while also retaining complete and exclusive ownership of the franchise's intellectual property rights.

To ease the studio's nerves, George had a proposition.

Instead of accepting $500,000, George proposed Fox keep his salary at $150,000 in exchange for two seemingly insignificant asks:

#1) That he retain all merchandising rights.

#2) That he retain the rights to any sequels.

As crazy as it sounds now, at the time this was actually a fantastic deal for the studio. Fox had recently lost a fortune in the merchandising business with monumental failure of 1967's "Doctor Dolittle", so they weren't exactly dying to get back into that world. Moreover, merchandise was simply not a meaningful revenue stream for studios back then. As for sequel rights, considering the fact that no executive thought the movie had a snowball's chance in hell of making money the first time around, the sequel rights were considered worthless.

So the deal was struck…

Decades later it would be looked backed on as the best deal in the history of Hollywood.

And then there's the toys and merch.

100% of profits from all these streams went to George Lucas.

Most importantly though, without retaining the IP rights, George wouldn't have "owned" anything, and therefore wouldn't have had anything to sell to Disney decades later.

On October 12, 2012 it was announced that George Lucas reached an agreement to sell all rights to the entire "Star Wars" franchise to Disney for $4 billion.

As we teased earlier, George opted for a half cash/half stock deal. Technically, the deal was 55% cash/45% stock:

At the time the deal was closed, Disney was trading at $50 per share, so the "stock" portion was $1.85 billion. His 37 million shares represented a roughly 2.1% stake in the company. He was immediately the second-largest individual shareholder behind Laurene Powell Jobs, Steve Jobs' widow. When Steve Jobs sold Pixar to Disney in 2006, he received 138 million shares of the company, roughly 7% of the total outstanding. Laurene inherited his stake after Steve's death. Laurene has since sold off roughly half of the stake but she is the largest individual shareholder, owning around 4% of Disney.

Immediately before the Disney sale was announced, George Lucas's net worth was $3.3 billion. After the deal was confirmed, we estimated his after-tax net worth at $5.5 billion.

Speaking of taxes, thanks to a tax loophole that was closing two months later, George actually saved around $100 million in taxes closing when he did. On January 1, 2013, business-friendly George W. Bush era tax cuts expired, at which point the long-term capital gains tax rate increased from 15% to 20%.

"Star Wars" wasn't the only franchise Disney bought for $4 billion. In 2009, Disney paid $4 billion for Marvel Entertainment. HOWEVER, at the time the deal was announced, several of the Marvel franchises had pre-existing deals with other studios.

2012's "The Avengers" was the first Marvel movie to be fully produced and distributed by Disney without another studio taking a cut of profits.

Disney would go on to generate around $20 billion at the global box office from Marvel movies post 2012.

Disney has generated around $5 billion on post-Lucas "Star Wars" movies.

On November 12, 2019, Disney entered the streaming wars with the launch of Disney+. Ten million people signed up on day one. This week, just 16 months after launch, Disney confirmed that they've crossed 100 million paying subscribers to the streaming service.

So, how has Disney stock performed over the last decade? Below is chart. The arrow is the day George Lucas sold to Disney: 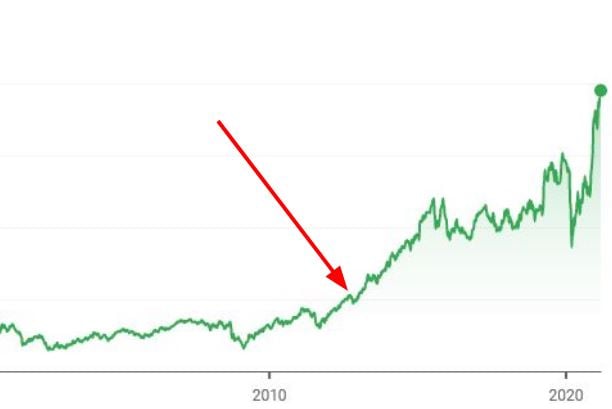 As you can see, minus a few months in early 2020 when basically every stock in the world tanked due to pandemic fears, Disney stock has been on a tear.

This week, thanks largely to the 100 million subscriber announcement, Disney hit an all-time high of $203 per share. On Wednesday (the day this article was written), Disney closed at $195.

By all accounts, George Lucas has not sold a significant number of his Disney shares. In 2013 there were reports that he had sold 100% of his stake. Those reports were quickly debunked. What had actually happened was George filed notice with the Securities Exchange Commission after transferring the shares to The George W. Lucas, Jr. Fourth Amended and Restated Living Trust. Some outlets interpreted that as a filing to indicate intention to liquidate. A LucasFilm rep rejected the rumors, affirming George had no intention of selling his shares then or anytime soon.

Assuming George still owns his full stake, at $200 George's 37 million shares are worth =

In years when Disney is paying dividends (which historically has been every year except 2020), as the owner of 37 million shares, George receives $32 million twice a year as a dividend payment. So in the years 2013 – 2019, George presumably received around $448 million in dividends.

Put it all together and you now understand why George's net worth today is sitting at an all-time high of $10 billion.

That's actually really good news for humanity because George was one of the first billionaires to sign Bill Gates and Warren Buffet's Giving Pledge. George has confirmed he intends to give his ENTIRE fortune to charity by the time he dies. In other words, we should all keep rooting for Disney stock!

Had George taken the full payment in stock, he would have gotten around 80 million Disney shares. At $200, today those 80 million shares would be worth $16 billion 🙂

Should have done all stock!