From Sandwich Seller To Multi-Billionaire NFL Owner – The Life Story Alex Spanos, Who Just Died At the Age Of 95

By Amy Lamare on October 12, 2018 in Articles › Billionaire News

Alex Spanos, the billionaire owner of the NFL's Los Angeles Chargers, passed away October 9, 2018 at the age of 95. He was a self-made billionaire who got his start peddling sandwiches on a lunch wagon in Stockton. He started his modest catering business with an $800 loan in 1951 and parlayed that into a $1.1 billion fortune, the A.G. Spanos Companies conglomerate, and ownership of an NFL franchise.

Alexander Gus Spanos was born in Stockton, California on September 28, 1923. His parents were Greek immigrants. He was eight years old when he started working at his parents' bakery. He enrolled in college at the California Polytechnic School but dropped out to join the Air Force and train as a pilot. Instead, he ended up serving as a tail gunner during World War II. After the war, he returned to college at the University of the Pacific in Stockton where he earned varsity letters in swimming and diving. He was also a well regarded amateur golfer. 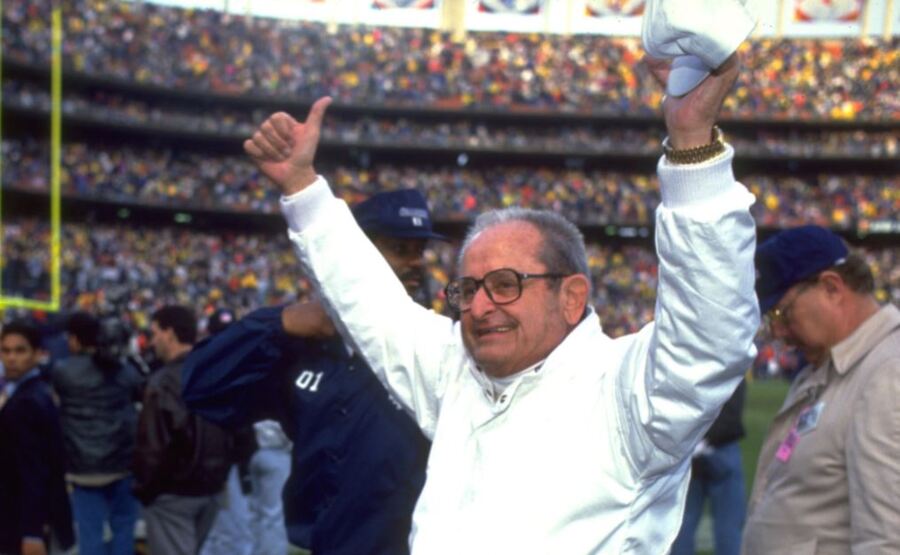 In 1951, Spanos borrowed $800 from a local banker to buy a truck which he sold sandwiches out of to migrant farm workers in California's San Joaquin Valley. He made his first million by 1955 and invested those earnings in real estate. His tax accountants suggested he build apartments, so he did. In 1960, he founded A.G. Spanos Companies. By 1977, he was the largest apartment builder in the United States. A.G. Spanos Companies has built more than 120,000 apartments from California to Florida. The company has 10 subsidiaries and also develops master planned communities and commercial properties.

In 1984, Spanos bought a 60% stake in the San Diego Chargers. Over the next decade he increased his stake until he was full owner. He was actively involved in running his NFL franchise in the early days. He turned the day-to-day operations of the Chargers over to his son Dean in 1993 and concentrated on hiring $8 million worth of personnel that led the Chargers to their first Super Bowl in 1995.

Spanos was a major philanthropist. He gave millions to charities, churches, schools, hospitals, and civic organizations. He was a major donor to disaster relief programs across the globe as well as local programs in his own community. He gave generously to Greek religious and cultural groups. He was also a major contributor to Republican politicians including former California governor Arnold Schwarzenegger and President George W. Bush.

Spanos married Faye Papafaklis in 1948. They had four children, all of whom work in the family businesses. Dean Spanos is the Chargers' team president. Michael Spanos is the executive vice president of the Chargers. Alexis Spanos Ruhl and Dea Spanos Berberian are both vice presidents at A.G. Spanos Companies. Faye Spanos died on August 7, 2018. She was 92 years old.

Officially, Alex Spanos' cause of death is complications of the dementia he suffered from since 2008.