By Amy Lamare on February 13, 2020 in Articles › Billionaire News

Frederick Koch, the eldest of the four sons of Fred and Mary Koch, has died at his home in Manhattan. The cause of death is heart failure. He was 86. He spent his life as he wished, which was far removed from the business his father started and his brothers run and the politics they partake in. He was born in Wichita, Kansas on August 26, 1933. His mother, Mary Clementine, loved the arts. She nurtured a similar passion in her firstborn.

Fred left his family as a teen to attend the Hackley School in Tarrytown, New York. He was the valedictorian of the class of 1951. He attended Harvard where he studied humanities and graduated in 1955. His father and three brothers all studied engineering at MIT. Fred enlisted in the Navy Reserve after college and then enrolled at the Yale School of Drama. He studied playwriting and specialized in Shakespeare. He graduated in 1961 with his master's degree in fine arts and considered becoming a drama critic or a playwright. He ended up becoming a collector of literary and music works as well as real estate. Frederick amassed enormous collections of literary and musical manuscripts, rare books, and art. One of his prized possessions was Marie Antoinette's canopied bed.

In the 1980s, he bought two apartments and six manor houses, including a castle in Austria. Renovations were only undertaken after he did extensive research on the history of the residences so that his renovations were true to the home's history and setting. One of these properties was a 72-room Tudor Mansion in Surrey, England called Sutton place that was built in the 1500s. Another was the Villa Torre Clementina, a palace on the French Riviera dating to medieval times. At the time of his death, he owned two properties in Manhattan, a French Regency-style mansion on East 80th Street and a one-bedroom apartment on Fifth Avenue, which was his primary residence. He also owned a mansion near Pittsburgh and the castle in Austria. 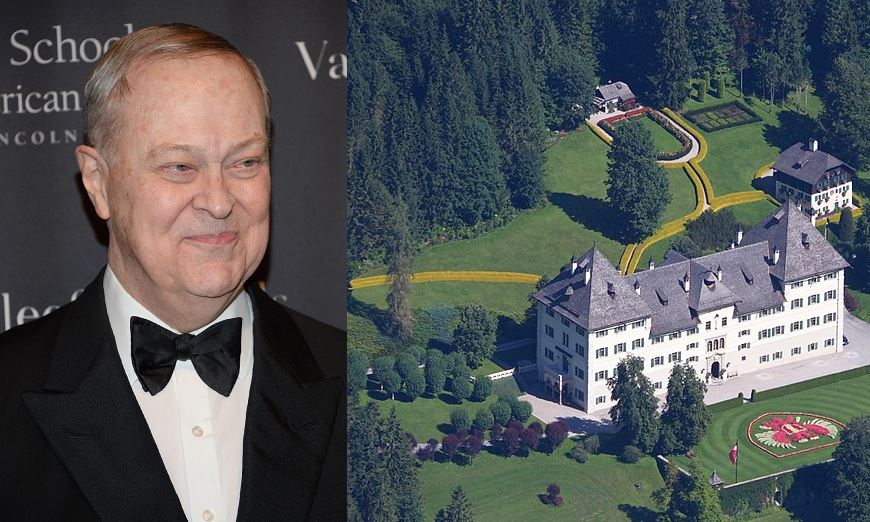 Fred Koch and his Austrian Mansion (via Getty/Wikicommons)

Frederick had little in common with his billionaire brothers. He devoted himself not to oil or to politics, but to the arts and preservation of historic works and properties. Frederick, known to friends as Freddie, rarely saw his brothers as an adult, except in court. In the 1980s and 90s, the four Koch brothers were embroiled in a nasty battle with Charles and David on one side and William and Frederick on the other. At the time, the press called it the "nastiest family feud in American business history."

The 20-year battle between the brothers got so bitter that the brothers hired private investigators to dig up dirt on each other. In one case, investigators hired by Bill went through the garbage from the homes and offices of Charles, David, and their attorneys. He allegedly bribed janitors and trash collectors. Then, in 1980 Bill attempted a coup to take over the board of Koch Industries and force his brothers out. Charles and David defeated that plan and fired Bill. They sent their brother on his way with a $400,000 severance payment.

Even that wasn't the end of it. A lawsuit of Koch vs. Koch Industries in 1998 saw the family drama reignite. During the trial, David broke down crying on the stand as he told the story about the drama between the brothers. After Charles and David won, Bill told reporters he intended to appeal, saying, "These guys are crooks." In the end, Bill and Fred ended up with $1.1 billion each.

Fred Koch was a major philanthropist. He made a number of anonymous donations to independent theatres in New York and London. He was on the boards of the Metropolitan Opera, the Spoleto Festival USA in Charleston, S.C., and the Film Society of Lincoln Center.

His most substantial gift was to Yale's Beinecke Rare Book and Manuscript Library. He donated his collection of musical and literary manuscripts, which included more than 2,000 items including original scores by Verdi, Wagner, and Debussy. His donation to Yale also included Noel Coward's diaries and the corrected typescript of Henry Miller's Tropic of Cancer.

Fred is survived by Bill and Charles Koch. He is preceded in death by his parents Fred Sr. and Mary and his brother David. Fred's entire estate, including his investments, real estate, and art collection, will be used to establish a foundation to promote the study of literature, history, and the arts.