It was a horrific scene. At just before 7pm local time in Paris on Monday, Notre Dame Cathedral burst into flames. Every news station and media outlet across the globe reported on the event and the world watch in horror as one of the most well-known and beloved icons and cathedrals in the world faced destruction. The 850 year old structure is the world's best example of French Gothic architecture and home to priceless art and artifacts of the Catholic church, including the crown of thorns Jesus wore during his crucifixion.

All together so far, the super rich of France have pledged $1 billion to help rebuild Notre Dame, with nearly $700 million of that coming from France's three richest families.

Monday's fire brought down the cathedral's famous spire and obliterated the roof and much, if not all, of the wooden interior structure. The fire was fully extinguished by 10am local time Tuesday. The damage to the cathedral has been called colossal but not a complete loss. The images are heartbreaking to anyone who has spent time in the magnificent structure. 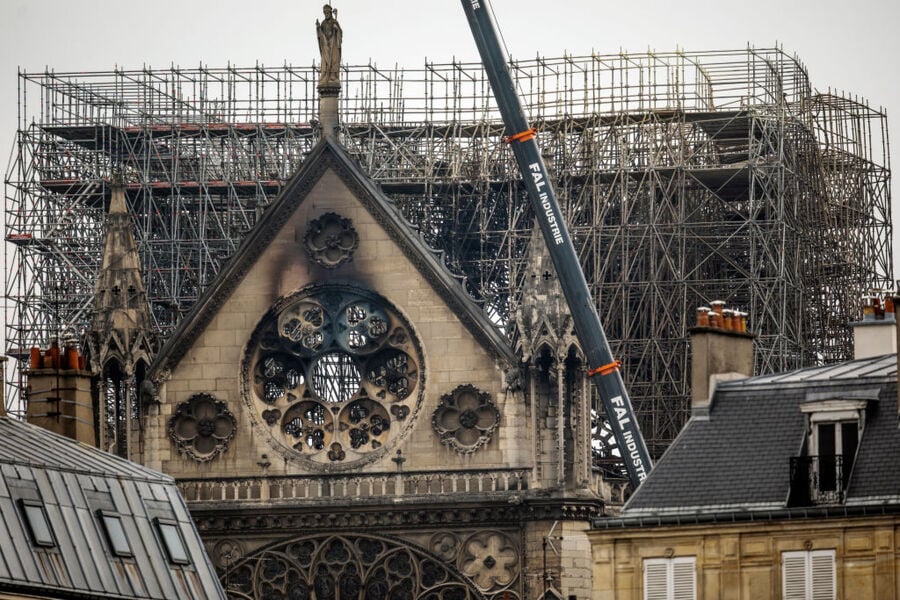 By Tuesday afternoon, four separate donations of at least $113 million had been pledged to the fund for the rebuild.

The world's fourth-richest man Bernard Arnault pledged $226 million to help rebuild Notre Dame just hours after Salma Hayek's husband Francois-Henri Pinault donated $113 million to the rebuild fund. Both men are the heads of conglomerates that own some of the world's most luxurious brands. Arnault is the richest person in France and Europe and head of LVMH the holding company that owns 70 luxury brands including Louis Vuitton, Christian Dior, Bulgari, and Dom Perignon and has a net worth of $90 billion.  Through the holding company Kering, Pinault oversees a vast portfolio of luxury brands including Gucci, Saint Laurent, Alexander McQueen, Stella McCartney, and Balenciaga.

Soon after Arnault made his pledge, the French oil company Total pledged $113 million. Next up was the Bettencourt-Meyers family who pledged $226 million. They are the heirs to the L'Oréal fortune and count among their ranks the richest woman in the world, Francoise Bettencourt-Meyers and her net worth of $46 billion.

A number of donors outside of France have also pledged money to rebuild the famous landmark. The Walt Disney Company pledged $5 million to restoration efforts. Apple CEO Tim Cook tweeted that his company would help in the rebuilding effort, saying:

"We are heartbroken for the French people and those around the world for whom Notre Dame is a symbol of hope. Relieved that everyone is safe. Apple will be donating to the rebuilding efforts to help restore Notre Dame's precious heritage for future."

He did not elaborate on just how much Apple would be donating.

Experts say that restoring Notre Dame, which took a century to complete after construction started in 1160, will take decades.