Forever 21, Amazon, Rumored To Be Bidders For Troubled American Apparel

By Amy Lamare on January 13, 2017 in Articles › Billionaire News

American Apparel is up for auction in bankruptcy court. The Los Angeles-based retailer, who famously declared they were "Made in the U.S.A." has faced years of scandal and trouble at the hands of founder Dov Charney. After his ousting, the outlook for the sportswear company did not improve and now the company is up for auction for a starting bid of $66 million.

American Apparel began its second round with bankruptcy last November with roughly $177 million in debt. Founder and former CEO Dov Charney founded the company in Montreal in 1989 and moved it to Los Angeles in 1997. For awhile, American Apparel stores seemed to replicate like gremlins, popping up on every other corner.

However, there were a lot of grumblings about Dov Charney's inappropriate behavior. He reportedly enjoyed walking around the office in his underwear and may have conducted job interviews in the nude. There were the allegations that he openly consumed cocaine in front of employees. And there was the bizarre story of how he supposedly imprisoned an employee in his home, treating her as a sex slave. Then there were the company's hyper-sexual, borderline-pedophilic billboards that seemed to be plastered all over every major American city. This company was clearly run by a different kind of CEO. A CEO who helped his company go public to roaring cheers of Wall Street analysts. A CEO who sat back as 96% of his $700 million+ fortune evaporated into the air over a matter of years.

American Apparel has not made a profit since 2009, which was the same year the company had a run-in with Immigration over the employment status of 1,800 employees. American Apparel had to fire those employees, more than a quarter of their workforce. The loss of those workers caused production delays. When 2009 was done, the company had a 90% drop in profits compared to 2008 and has been on a downward spiral ever since. 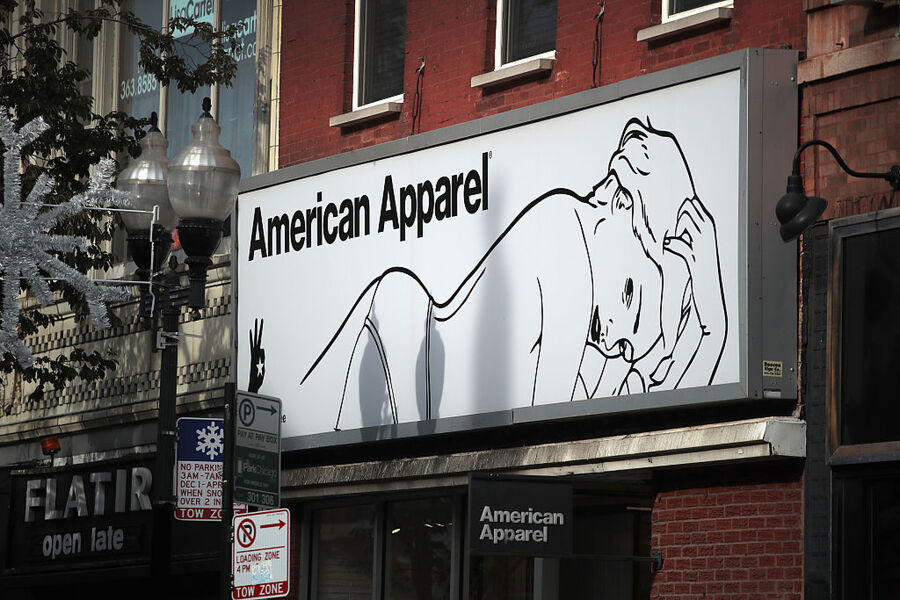 The company filed for chapter 11 bankruptcy in the fall of 2015 and emerged from in early 2016, only to file for bankruptcy again in November 2016.

American Apparel has notified its employees that they could be laid off as early as this month.

We previously reported that e-commerce giant Amazon is reportedly sniffing around the auction block. Canadian clothing company Gildan has placed an official bid. Now, sources are saying that Los Angeles-based teen apparel store Forever 21 is in the hunt for the bankrupt company.

Of course keeping jobs in the U.S. has become a hot issue since the 2016 presidential election. President-elect Donald Trump made it a priority in his campaign, in fact.

American Apparel operates in Los Angeles. California is one of the most expensive states in terms of real estate and labor. U.S. apparel manufacturing has declined sharply since 1991 in the face of cheaper costs overseas.

Canadian company Gildan Activewear, Inc. has placed a $66 million bid for American Apparel but for the brand only. It includes an option for the manufacturing facilities and inventory. However, Gildan makes most of its clothing in low cost countries outside of North America. Nearly 90% of Gildan's 42,000 employees are in the Caribbean and Central America where wages are very low. In California, the minimum wage is set to gradually increase to $15 per hour over the next handful of years.

Of course, Amazon's acquisition of American Apparel would give the company a big boost in the area of branded fashion. Amazon has been expanding into that category over the past year.

Forever 21 was founded in Los Angeles by Jin Sook and Do Won "Don" Chang. The couple emigrated from South Korea to Los Angeles in 1981 in search of the American Dream. They opened a 900 square foot clothing store in 1984 in L.A. and called it Fashion 21. That first year, the couple had $700,000 in sales. As it turned out, Jin Sook had a knack for spotting trends that were easy to copy. This gave the Changs an edge in the competitive garment industry. To succeed in this landscape, one needed speed, flexibility, and vision. Don and Jin Sook had that and as such, they might be an ideal place for American Apparel to find a new home.

The auction of American Apparel is expected to be complete next week.