We were all shocked to hear that Bill and Melinda Gates are getting divorced. Needless to say, Bill and Melinda Gates have A LOT of assets to divide. When they started dating in 1987, Bill Gates was already a billionaire with a net worth of $1.25 billion. When they married in 1994, he was worth around $15 billion. Thanks largely to his Microsoft stock. Bill was the richest person in the world uninterrupted from 1995 to 2017. Before the divorce was announced, Bill's $146 billion net worth was the 4th-largest fortune in the world.

Washington is a community property state and Bill and Melinda did not have a prenup. Of course, they could go the same route as Jeff Bezos and MacKenzie Scott and simply negotiate an equitable settlement on their own without getting the divorce courts involved.

Bill and Melinda are apparently planning to split their assets according to a separation contract that has been recently negotiated. It may be none of our business, but frankly, we can't wait to see how it all shakes out. 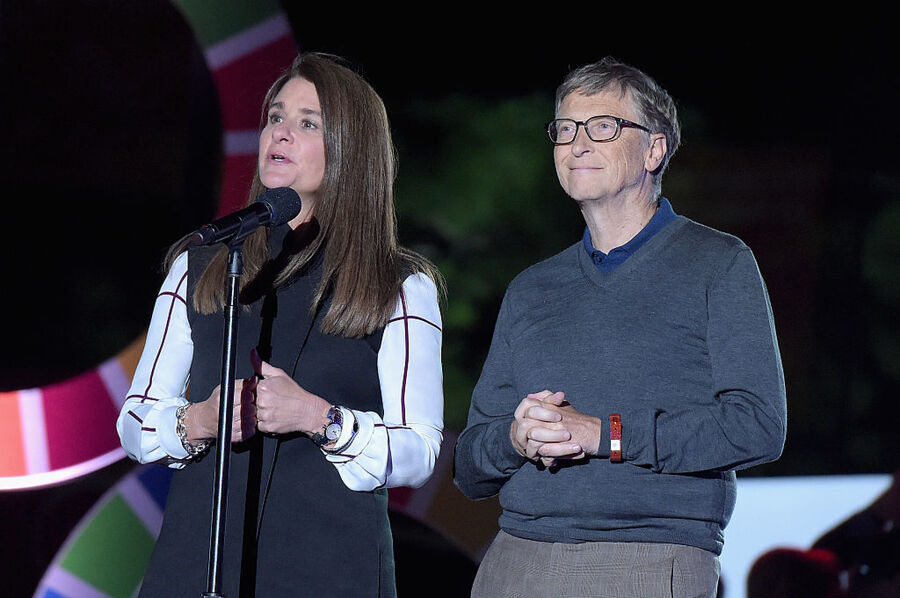 The Assets Of A $150 Billion Couple

Bill and Melinda Gates have a ton of assets to divide. For one thing, they own 242,000 acres of farmland in the U.S., making them the largest private farmland owners in America. Their portfolio of farmland covers 18 states with their largest holdings in Louisiana, Arkansas, and Nebraska.

Bill and Melinda also own homes in five states, an extensive art collection, a fleet of cars, and several private jets. Chances are the "separation contract" they've negotiated addresses all of this. Bill and Melinda are also the co-founders and members of The Giving Pledge and have vowed to give away the majority of their income by the end of their lives. That said, they still have a number of assets to split up.

The Gates family's main house on Lake Washington in Medina, Washington is called Xanadu 2.0. It is a 66,000 square foot mansion overlooking the lake. It is located about nine miles away from the headquarters of The Bill and Melinda Gates Foundation in downtown Seattle. Bill purchased the lot the home sits on for $2 million in 1988 and spent seven years and $63 million building Xanadu 2.0, so it was ready about a year after he and Melinda married.

Xanadu 2.0 has a 60-foot swimming pool with an underwater music system, a 2,500 square-foot gym, a 1,000 square-foot dining room, six kitchens, and a dining hall that can seat 200 people. For larger gatherings, the 2,300 square foot reception hall can seat 150 people for dinner or 200 for a cocktail party. Gates is an avid reader, and the ceiling of his large home library is engraved with a quotation from The Great Gatsby that says, "'He had come a long way to this blue lawn, and his dream must have seemed so close that he could hardly fail to grasp it."  The 2,100 square foot library features priceless works, including pieces by Da Vinci. The library has two secret bookcases that open—one of which contains a bar.

The annual property taxes on the mansion are reported to be $1.063 million, on an assessed value of $150 million. The home sits on a five-acre plot with an artificial stream stocked with salmon and trout. Gates also had a beach created with sand imported from the Caribbean. The home has seven bedrooms and 18 bathrooms as well as an art deco home theatre that seats 20.

Bill and Melinda also own a $59 million ranch in Wellington, Florida, the equestrian capital of the world. Jennifer Gates is an accomplished equestrian.

The family also owns a $9 million 492-acre ranch in Wyoming called Irma Lake Lodge that originally belonged to Buffalo Bill (back in 1902) and is named after his oldest daughter. Gates bought the property in 2009. It is located adjacent to the Shoshone National Forest and the Washakie Wilderness, which gives the Irma Lake Lodge more than three million acres of backyard filled with wilderness and forest. There is a 15,000 square foot main home with five bedrooms and three bedrooms as well as a guesthouse, caretaker's house, stable, and rusted hut. Buffalo Bill's original three-room hunting cabin is also on the property.

Bill and Melinda also own two homes in California. They bought Rancho Paseana in 2014 for $18 million from Jenny Craig. The 228-acre estate is located in Rancho Santa Fe in San Diego County. The home comes with its own orchard, racetrack, and five barns that can house 50 horses.

In April 2020, the Gates bought a $43 million beach house in Del Mar, California. The 5,800 square foot home has six bedrooms and four bathrooms. It is a city landmark and has 120 feet of private ocean frontage.

Gates also has a fleet of cars. Xanadu 2.0 has a garage that can hold 30 vehicles. He owns a Porsche 930 Turbo, a Jaguar XJ6, and a Ferrari 348. His most valuable car is a Porsche 959 he had to wait 13 years for while it cleared customs in the U.S. His most recent purchase is the electric Porsche Taycan.

It is believed that Gates own one or two $65 million Gulfstream G650ERs, two Bombardier Challenger 350s, a Cessna Seaplane, and several helicopters.

Bill and Melinda also have an extensive art collection. The prized piece in the collection is Leonardo da Vinci's Codex, which Bill bought for $30 million in 1994 at auction at Christie's in New York. It is known as the Leicester Codex, as it was once owned by the Earl of Leicester. A special nook has been constructed to display one of Gates's most prized possessions – a scientific notebook kept by Leonardo da Vinci in the early 1500s. The notebook contains observations and theories on the properties of celestial light as well as rocks, water, air, and fossils.

The Gates' art collection also includes "Lost On The Grand Banks" by Winslow Homer, which was purchased in 1998 for $36 million. They also own George Bellows' "Polo Crowd," which cost $28 million in 1999. "The Room of Flowers" by Childe Hassam, cost Gates $20 million and hangs in his home library. He also owns "The Nursey" by William Merritt Chase, which is worth $10 million.

The division of assets in the divorce of Bill and Melinda Gates is going to be complicated and very interesting.