By Brian Warner on February 17, 2021 in Articles › Billionaire News

In the last couple days of trading, Tesla stock has dropped around 15% from an all-time high of $900 to today's opening price per share of $766 (I'm typing this at 6:30am pst on Wednesday morning). With the decline, Elon Musk's net worth dropped from $210 billion to $190 billion. In the same time frame, Amazon shares stayed basically flat. Unfortunately for Mr. Musk, that allowed Jeff Bezos to re-take the crown of richest person in the world, with a net worth of $191 billion. Jeff didn't get to wear that crown for long, though. With some news that was just announced, Elon's fortunes have rocketed him right back into the top spot… and it's all thanks to his OTHER company, SpaceX.

According to an exclusive scoop from CNBC, SpaceX just raised a new round of funding that values the privately-held company at $74 billion. That's up from the $46 billion valuation it achieved after its previous raise in August 2020.

For those who may not be aware, private companies raise money and achieve new valuations by selling stock, much like a public company. The only difference is the company shares are not available to purchase on an exchange like the NASDAQ. For example, CelebrityNetWorth is a private company, with a specific number of private shares that are owned by one person (me). Let's say there are 100 shares. If an investor approached me and wanted to buy some shares, we would negotiate a price per share. We would look at CNW's profits and losses, recent performance and future growth potential. If we agreed that the investor would buy ten shares for $100,000, that would mean one share is worth $10,000. My 90 shares would be worth $900k. All 100 shares would be worth 100 times 10,000 = $1 million. In finance parlance, CNW would have a market capitalization (aka market cap, aka valuation) of $1 million. Also in finance parlance, if this was my first time raising money, this would be my "Series A round."

Now, let's say six months later a new investor comes around and is totally blown away by CNW's performance and future prospects. This new investor wants to buy ten shares at $20,000 per share. And let's say I'm agreeing to sell five more of my shares (reducing my stake to 85) and Investor 1 kicks in 5 from his stake so he can take some money off the table. CNW's market cap is now $20,000 times 100 = $2 million. My 85 remaining shares are worth $1.7 million AND I just got paid $100k cash. Investor 1 got his full $100k investment back and he still owns 5 shares that are worth $100k. This is my "Series B round".

FYI, by my calculation, today's announcement is SpaceX's "Series M" round, meaning it has raised 12 earlier rounds of private funds. The company has raised north of $6 billion in private funds from hundreds of investors since 2002.

The trick in all of the above is you can't just log onto etrade or Robinhood to buy shares in CelebrityNetWorth or SpaceX. You basically need to have a connection to the owners of the private stock. Or be extremely rich and network your way into a meeting with SpaceX's CFO.

Now that we have a bit of a knowledge base, let's talk about what SpaceX just announced.

What Does SpaceX Even Do???

They launch rockets. Some of those rockets go to Mars for scientific research purposes. Some transport astronauts into space. Other rockets simply transport satellites up into Earth's orbit. These satellites are where SpaceX hopes to make a killing someday in the not-so-distant future.

SpaceX rockets have transported more than one thousand satellites to date. Their plan is to link 12,000 satellites together to provide high-speed broadband internet to every square inch of earth. SpaceX calls this ambitious plan "the Alan Parson Project"… I mean, "Starlink". SpaceX estimates that Starlink will cost… wait for it… $10 MILLLLLLION dollars to build.

What? Not a lot of money anymore? Ok ok for real, they estimate that Starlink will cost $10 billion to build and they hope it will someday generate $30 billion in annual revenue. 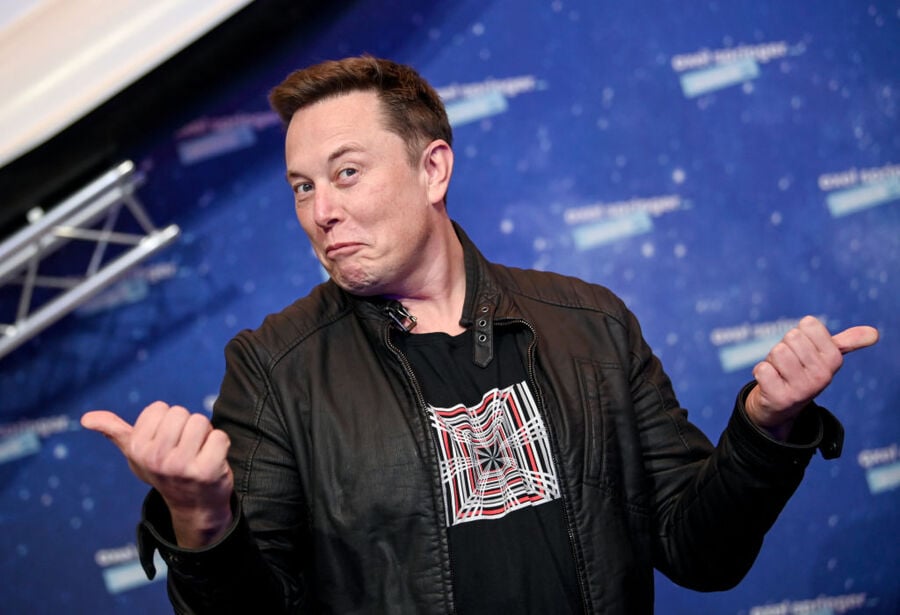 How Does This Impact Elon Musk's Net Worth?

As you know, Elon's net worth is the result of combining the value of his stakes in Tesla and SpaceX.

When SpaceX raised $46 billion in August, Elon was left with a 48% stake. That's $22 billion. It's not clear as of this writing if Elon sold shares in today's round (which would have reduced his percentage). Let's assume his stake wasn't diluted. That would mean today his SpaceX shares are worth =

Elon's unique bonus plan with Tesla has earned him $50 billion worth of additional shares. Roughly half of those, $20 – $25 billion, have been approved by the board as of this writing. Let's be conservative and use $20 billion. That gets you to Elon Musk's current net worth of =

That's more than enough to rocket Elon right back up to the richest person on earth.

I wonder why he's trying so hard to leave earth! If I were the richest person in the world, I would start a space program that after a year of research announced "Sorry! There's nowhere to go, let's all stay here and continue worshiping me!"