Elon Musk is having a very good week, and an extremely good year. Since the beginning of the year, Elon Musk's net worth has grown by a mouth-watering $51.5 billion, from $27.5 billion on January 1st to $79 billion as of this moment. The only person on the planet who has done better in the same time period, as you probably could have guessed, is Jeff Bezos. Since the beginning of the year, Jeff Bezos' net worth has grown by an astounding $71 billion, from $115 billion $186 billion, as of this writing.

But we're here to talk about Elon.

When we talk about Elon Musk, we have to remember that his net worth is attributable to TWO companies, Tesla and SpaceX. He owns 54% of SpaceX and 22% of Tesla.

For Elon to have his current net worth of $79 billion, here's how that is broken down:

SpaceX is privately held and its value doesn't change too dramatically. Tesla stock price movements have the biggest impact on Musk's net worth. But that's not the only way he earns money from the electric car company. 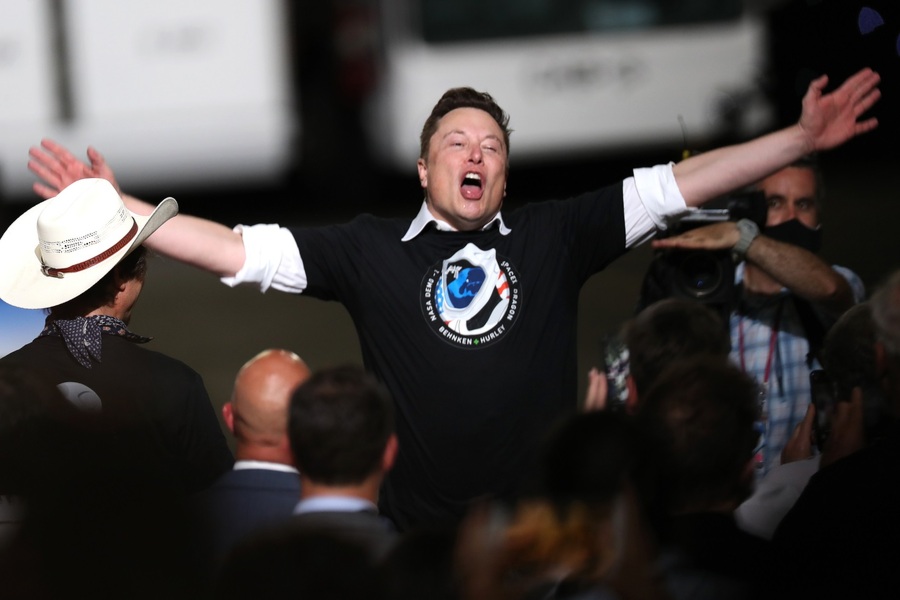 Elon has a unique payment plan with Tesla.

To keep this simple, Elon does not earn a single dollar in salary from Tesla. Instead, he has an extremely unusual compensation plan that awards him 1.69 million new shares every time the company increases in market cap by $50 billion… all the way up to $650 billion. It needs to hold each $50 billion increase for six months.

Think of the 12 market cap goals like levels in a video game. The levels start at a market cap of $50 billion, then $100 billion, then $150 billion… ending at $650 billion. To beat each level, over a six month period he needs the company's entire value to hold for six months above the milestone amount.

If he hit every single goal, that would mean the company would eventually have a market cap of $650 billion, more than double what it is today. At that level, if Elon did not sell any of his bonus shares along the way, his milestone shares would be worth $100 billion.

When Elon and the Tesla board struck this deal back in 2018, the company had a market cap of $50 billion. At the time, many industry analysts were actually predicting the value of the company would drop in half or more.

Don't bet against Elon and Tesla.

Elon hit that first level – six months market cap average north of $100 billion – in May 2020. So at that point he was awarded 1.69 million new shares, which were worth $700 million at the time of the award.

Amazingly, after taking two years to beat the first level, it took him just three months to hit the second level. The second level required the stock to maintain a market cap above $150 billion for six months.

He unlocked this level YESTERDAY!

How can he get a six-month bonus in just three months? Because it's a six-month rolling average and Tesla has absolutely soared in the last few months, pulling the average way up along the way.

Today the company's total market cap is just under $300 billion. When you pull that back six months, the average gets pulled up above the $150 billion he needed to unlock the second tier.

When the company confirms the bonus with the SEC and physically transfers the 1.69 million shares, they would be worth the same $2.7 at today's stock price as his first tranche. Roughly $2.1 billion if he sold today, after the strike price.

That's $4.2 billion in pre-tax profits were he to sell both chunks.

If Elon hits every single milestone and never sells a single share, he could ultimately end up with a net worth of around $200 billion. At today's rankings, that would indeed make him the richest person in the world. But who can say how the world's richest will be ranked in a year or even six months from now. Jeff Bezos and Amazon's fortunes certainly don't seem to be slowing down.

But again. This article is about Elon Musk.

Congrats to Elon on an amazing year and for unlocking your second bonus!