By Amy Lamare on October 14, 2020 in Articles › Billionaire News

The tiny town of Boca Chica, Texas is home to 26 people (as of 2000 at least). It sits just a couple of miles from the mouth of the Rio Grande River. It's not far from the Gulf Coast and just 20 miles east of Brownsville, Texas. Founded in the 1960s, the peaceful town is facing extinction at the hands of billionaire Elon Musk. Back in 2015, the SpaceX founder started buying up land in Boca Chica. He started buying up abandoned houses. Why? He wants to build a private resort for SpaceX there. He's succeeded at buying most of the town but 10 tenacious residents are refusing to sell their homes to the eccentric billionaire.

Musk has centered his Starship-Super Heavy program in the tiny town. The 394-foot-tall reusable rocket could drastically reduce the cost of going to space as well as make trips to orbit the moon and Mars fairly affordable and accessible. The project is in danger if the 10 remaining people in Boca Chica—most of whom are retired and/or elderly continue to refuse to sell to Musk. 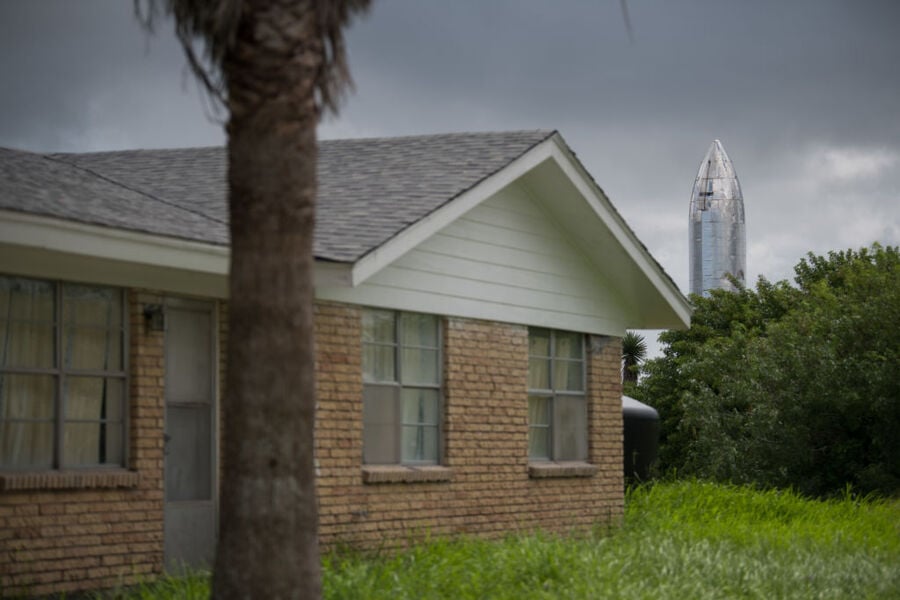 BOCA CHICA, TX – SEPTEMBER 28: A prototype of SpaceX's Starship spacecraft is pictured behind a home in Boca Chica Village on September 28, 2019. (Photo by Loren Elliott/Getty Images)

SpaceX tried to buy the whole town back in September 2019. At the time, the company claimed it offered people three times the value of their homes. However, the people of Boca Chica tell a different story. They claim they were low-balled on the offers for their homes. Nonetheless, a bit more than half of the town's residents accepted Musk's offer last fall.

Musk and SpaceX made its "best and final" offer to the 10 holdouts last week. The holdouts report that Musk and SpaceX have been trying to bully them out of their homes and have used threats and other aggressive tactics to try and pry them from their homes. The residents claim that Musk has made offers that are well below market value. They also report that SpaceX's Senior Director of Finance, David Finlay, has made several visits to their home to put pressure on them.

The residents also allege that SpaceX lied about the danger Starship launches posed to them and instead is turning the town into a place for SpaceX employees to live. Renovations on a number of properties has already been documented. One resident compared the tactics Musk is using in Boca Chica to the apartheid in his native South Africa. Another resident said the aggressive tactics Musk and those in his employ have used have so strained her relationship with her family that she accepted his offer, which wasn't even enough to pay off her mortgage. She felt she had no choice, that he'd come in and take it away from her no matter what.

SpaceX's final rounds of offers have already expired. The homes in Boca Chica had a market value of $40,000 to $60,000. Residents claim they were offered far less than that because SpaceX valued their homes based on the value of abandoned homes in the area. The residents cannot secure similar homes for what SpaceX paid them.

Musk began buying up properties in the beachfront town in 2011 and by 2014 had gotten the Federal Aviation Administration to sign off on his plan called "SpaceX Texas Launch Site Environmental Impact System." At the time, Boca Chica had 35 houses and a chapel. Musk wants the town to be the first commercial spaceport in the U.S.

Musk's plan hasn't been without issues. In March, a launch of Musk's Starhopper set off a wildfire in a nearby wildlife refuge that burned 130 acres and came within 1,000 feet of homes.

One Boca Chica resident had to board up one of her two bedrooms because of the unsuccessful launches. A ship that exploded broke her window. SpaceX fixed it quickly. The second time, she didn't know about the launch but she heard the siren and grabbed her dog to go into the boarded up room. All the windows in her home shook and the sonic boom type noise temporarily damaged her hearing.

It is critical for Musk to buy out the town to enact his plan because for each structure that SpaceX doesn't own, increases the chance that an accident would cause more than $25,000 in property damage – which would trigger an investigation by the National Transportation Safety Board. Every single home in Boca Chica is less than two miles from the SpaceX facility.

SpaceX claims it offered everyone in Boca Chica three times the value of their home. Residents believe that Musk thinks he can buy his way into anything and that's not the case for the holdouts. He has already torn down a number of the homes he bought and has renovated others to turn them into employee housing. SpaceX has also turned the town's corner store into a restaurant. He's also brought in Airstream trailers, fire pits, kayaks, and other amenities to turn the town into a private resort for SpaceX employees.