By Brian Warner on December 22, 2021 in Articles › Billionaire News

I've never been totally clear on the difference between Dubai and the United Arab Emirates, so I finally looked it up. I was interested to learn that the United Arab Emirates is an area roughly the size of SIX New York Cities located on the Persian Gulf bordering Saudi Arabia and Oman. More interestingly, the UAE is actually kind of like an umbrella organization of other countries. The UAE is made up of a federation of seven "emirates" which are basically seven distinct countries. Those countries are:

I'll admit that, before today, I had never heard of five of the above seven emirates. Each emirate is governed by its own Sheikh. Those seven Sheikhs form the Federal Supreme Council of the UAE.

Sheikh Mohammed is the third son of Rasheed bin Saeed Al Maktoum. Rasheed ruled Dubai from 1958 until his death in 1990. Roughly eight years into Rasheed's reign, Dubai discovered oil. That discovery instantly transformed Dubai from a sleepy resource-poor sandbox into one of the richest counties on the planet in terms of natural resource production, reserves and GDP.

Sheikh Mohammed and Dubai aren't just rich from oil. Over the decades the Al Maktoum family has poured billions of dollars of their oil royalties into investments across the globe, with a special eye for real estate. Sheikh Mohammed personally owns over $100 million worth of real estate in England alone. He is one of England's largest landowners. He controls his share of the family assets thanks to his 99.7% ownership stake in Dubai Holding which manages approximately $130 billion worth of assets around the world.

Sheikh Mohammed has spearheaded the following development projects within Dubai:

He also launched Emirates Airline back in 1984 with an initial $10 million investment. Another $75 million was invested over the next few years. Today the airline claims that it no longer receives any government subsidies and operates independently as one of the world's leading (and most luxurious) airlines.

When you put it all together, we estimate that Sheikh Mohammed Al Maktoum's net worth is… 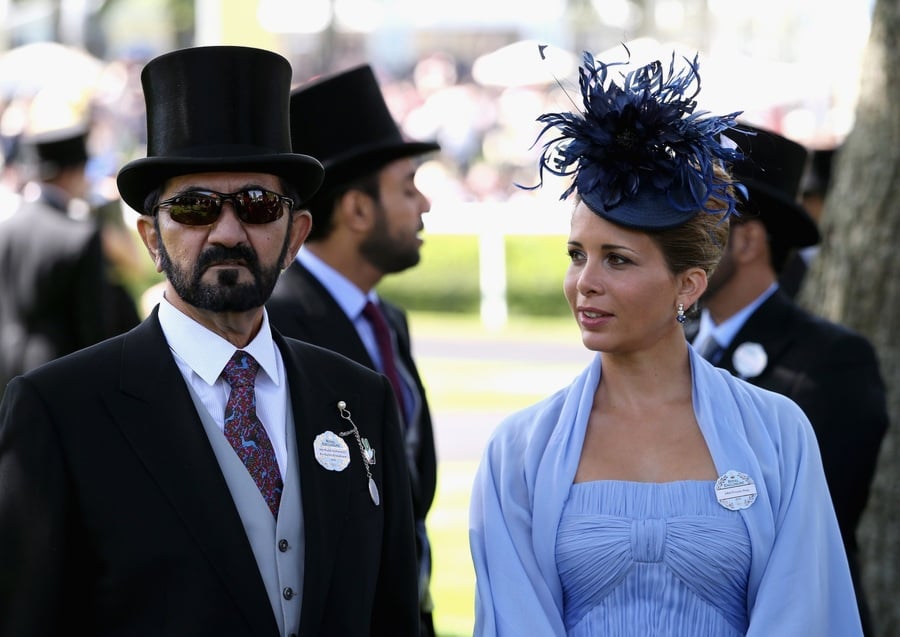 As of this writing, Sheikh Mohammed has 30 children between six wives. His most recent wife is Princess Haya bint Hussein. Haya is royalty herself even before this marriage. She is the daughter of the late King Hussein of Jordan. Haya and Mohammed married on April 10, 2004. They divorced in February 2019.

One month after the divorce, Princess Haya took the couple's two children and fled to the United Kingdom. She claims that she decided to flee after being told that there was a loaded gun in her bedroom and that a royal helicopter had been dispatched to transport her to prison. The implication being that she was being encouraged to kill herself.

In May 2019 Sheikh Mohammed sued Haya seeking a court order to have their children returned to Dubai.

In response to his demand, Haya brought forth evidence which alleged to show that Sheikh Mohammed had two daughters from a previous marriage kidnapped and returned to Dubai against their will after they attempted to flee. One of those daughters, Princess Latifa, was allegedly abducted off the coast of India in 2017 after commandos intercepted a yacht she was traveling on. The other daughter, Princess Shamsa, was allegedly abducted from England in 2000.

This week a judge issued a ruling in the divorce. After $100 million worth of legal bills were paid between the two sides, the judge agreed that Princess Haya and their two children had enjoyed "exceptional wealth" and a "remarkable standard of living while living in Dubai" and therefore Princess Haya and her children deserve to be compensated in a way that matches that lifestyle expectation.

The total amount Sheikh Mohammed has been ordered to pay Princess Haya?

That's roughly 5% of Sheikh Mohammed's net worth. It's half of the $1.4 billion Princess Haya had been seeking.

It is the largest divorce settlement in British history. The previous record for largest settlement belonged to Farkhad Akhmedov who reportedly paid his ex-wife a $600 million settlement in 2016.

The settlement will consist of a one-time lump sum of $330 million PLUS a $384 HSBC bank guarantee for his children. The family will also receive $15 million per year as a "maintenance payment," $4 million to cover the children's education, a $10 million maintenance payment back-payment and the Sheikh will continue to pay for the family's security costs.