Donald Trump may not be too happy to learn that being President of the United States actually cost him money. Basically, by stepping away from his business empire for four years, his net worth has fallen from $3 billion to $2 billion. Why? Well in a twist of irony, the pandemic, which he infamously predicted would magically go away, has been hitting his company very hard. Covid has hit the office buildings and hotels and resorts he owns. Additionally, the capitol riot that many believe he incited through his choice of words at his rallies, and his second impeachment are hurting his carefully crafted brand. The fallout from the events on January 6th have damaged his relationships with lenders and brokers. Trump has nearly $600 million in loans coming due in the next four years. More than half that amount has been personally guaranteed by Trump.

Trump's commercial real estate is the most important part of his business and accounts for 3/4s of his net worth. His most valuable holding is Vornado Properties, which has a 30% stake in two office towers – one in San Francisco and one in New York City. The value of his stake has fallen $80 million in the past two years to $685 million. Trump also owns 40 Wall Street in Lower Manhattan. In 2016, that property was worth $550 million. Today it is worth $277.7 million. Compounding the trouble at this property is the fact that the company that handled the leasing of this building cut its ties to Trump after his supporters stormed the Capitol. Meanwhile, over at Trump Tower, residents are having a hard time selling their units, even after cutting the price deeply. 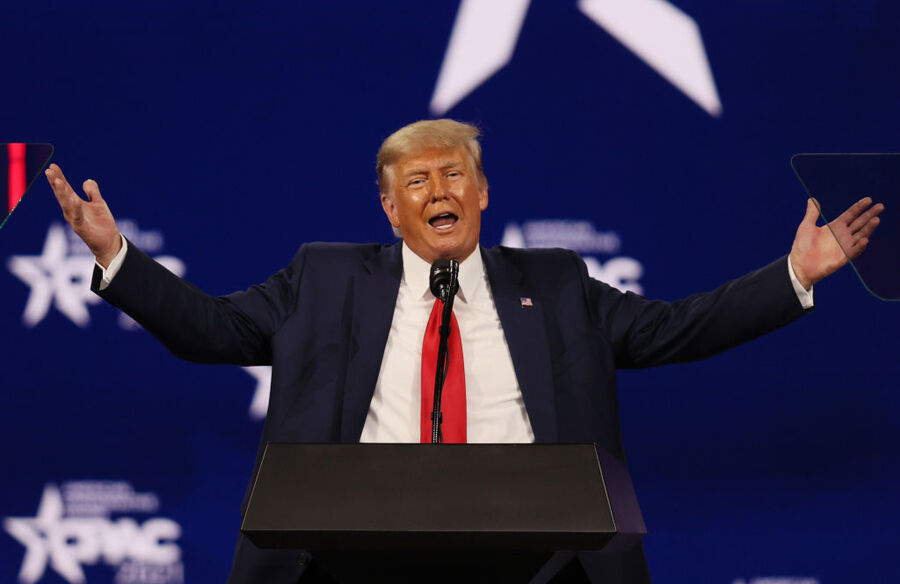 Trump owns, manages, or licenses his name to about 12 hotels and resorts from D.C. to Scotland. He's personally guaranteed $330 million of their debt. Almost half of that comes from a loan he took out to build his Washington DC hotel. One third of it is for his golf resort in Miami. The rest of the debt he guaranteed is tied up in his Chicago property. The lender, Deutsche Bank, cut ties with him and refuses to do further business with him after the Capitol riot. Trump put his Trump International Hotel in D.C. on the market in 2019 for more than $500 million. He received offers of $350 million and up and rejected them. The brokers representing the sale of the property quit in January after the Capitol riots. In Florida, revenue at his 643-room Trump National Doral Miami has fallen by more than $57 million. At least over at Mar-a-Lago, revenue was up to $22.9 million last year from $22.3 million in 2015.

Trump owns or manages 19 golf courses. Golf is an industry that has thrived in the pandemic thanks to the natural social distancing aspect of the sport. However his two golf courses in Scotland, Trump Turnberry and Aberdeen are consistent money losers. Additionally, after the attack on the Capitol, the PGA canceled its agreement to host the 2022 tournament at Trump National Golf Club Bedminster in New Jersey.

Trump licensed his name to a slew of business and buildings for decades. This revenue stream has dried up. Mattress company Serta ended a deal with Trump after he called immigrants from Mexico rapists. And, once again, after the riot at the Capitol other businesses cut ties with him completely including Trump Plaza in West Palm Beach. New York City is also trying to cancel his contracts and pull his name off ice rinks and a golf course.

Trump also owns a fleet of aircraft including a Boeing 757 that hasn't left the ground since the summer of 2019. All of his planes are decades old. In 2015, his fleet was worth $59 million. Now it's worth $6.5 million. Similarly, income from his books has pretty much evaporated. In 2015, he earned $888,000 in royalties from his books. In 2020 he earned $0. The chances of him cashing in on a post-presidential memoir like Bill Clinton and Barack Obama are looking slim thanks to, once again, the riot at the Capitol. After all, Simon and Schuster canceled Senator Josh Hawley's book due to his efforts to overturn the election. While Trump still has a lot of loyal and passionate supporters, what can a twice-impeached former president really write about?

The list of his former businesses that have gone under is long and includes:

And finally, Trump's legal bills are mounting. The District Attorney for Manhattan is looking into allegations of tax and insurance fraud against Trump. The Supreme Court allowed the Manhattan D.A. to receive eight years of his tax returns in February. The Attorney General of New York is also looking into allegations that Trump inflated property values to get tax and insurance benefits. The Attorney General of Washington D.C. also filed a lawsuit against Trump's inauguration committee, accusing it of funneling money to Trump's D.C. hotel by paying inflated rates. Trump is also embroiled in a lawsuit over a multi-level marketing firm called ACN that used Trump as a promoter, which is being accused of being a pyramid scheme.