Did A Federal Election Filing Just Expose Kanye West's Net Worth As "Hundreds Of Millions" Instead Of Billions? NO! Don't Believe The Headlines

By Amy Lamare on October 9, 2020 in Articles › Billionaire News

Believe it or not, Kanye West is still running for President of the United States. And just like all Presidential candidates, Kanye was required to submit a personal financial disclosure form which detailed his assets and debts. This is different from tax returns. This is a form where candidates running for positions in the executive branch give details of their assets, liabilities and income. Kanye's disclosure generated a bunch of salacious headlines this week. Unfortunately they were false headlines.

This week, a number of media outlets ran wild with headlines that proclaimed Kanye was only worth "hundreds of millions of dollars" according to his own federal financial filings. If true, we here at CNW would sure feel like bozos for proclaiming Kanye a multi billionaire back in April.

FYI, as of this writing, we peg Kanye West's net worth at $3.2 billion.

How could there be such a huge discrepancy? Actually there isn't a discrepancy at all. These other outlets are simply misinterpreting the form.

The title of the form in question is the "Executive Branch Personnel Public Financial Disclosure Report". The technical form number is "OGE Form 278e". OGE stands for Office of Government Ethics.

You can check out Kanye's form here but we're also going to include the relevant screenshots below.

The OGE Form 278e requires the filer to fill out a bunch of info regarding their finances, notably:

So let's dig in to Kanye's filing.

First off, check out Kanye's signature:

1) Positions held outside of US government. Aka, jobs.

Kanye lists himself as a Trustee, Managing Member, Director/VP/CFO of roughly 30 trusts, for example "Yeezy LLC" and "Very Good Beats, Inc." Here's a screenshot of the top portion of this section: 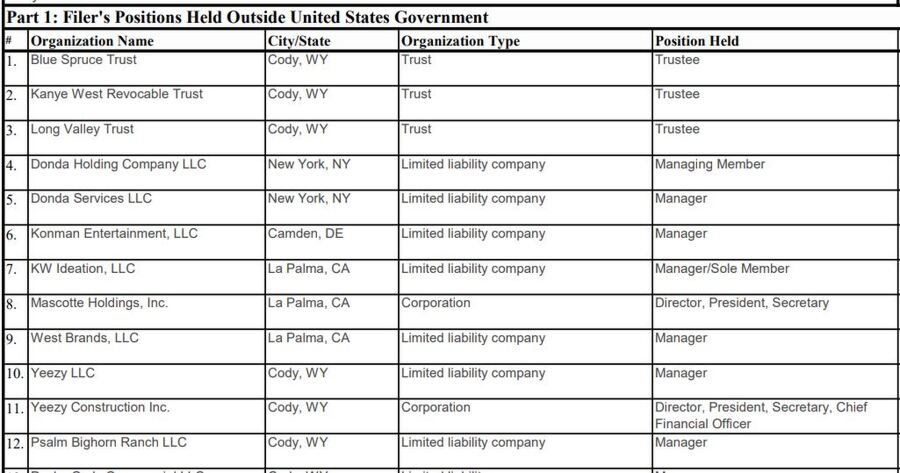 This is the juicy stuff. This is where Kanye places an estimated value on all of his business units AND annual income from each unit. Much more on this section in a moment, but here's a quick screenshot: 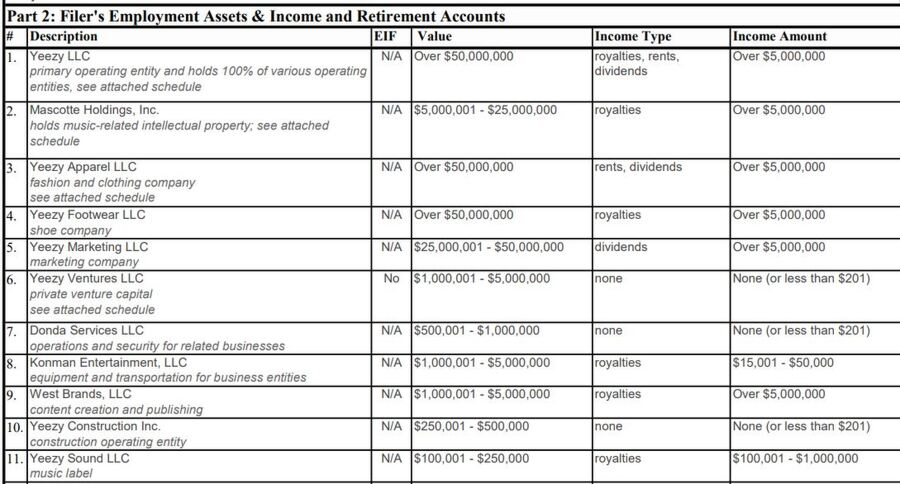 4) Other Assets and Income: 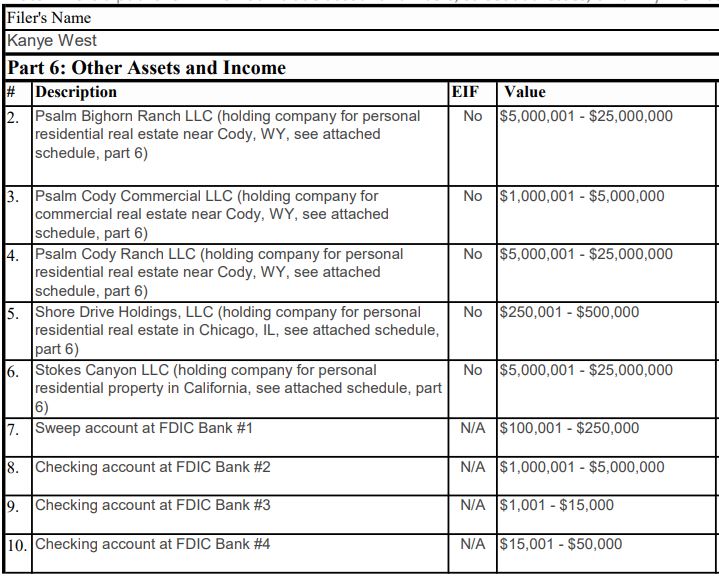 As you can see in the above screenshots, Kanye did indeed place an estimated current value for each of his assets. And if you added those values up, you'd get to roughly $325 million.

Later he estimates his liabilities at around $100 million.

Using these numbers, one would conclude that Kanye West's net worth would be $225 million, not even a tenth of our current $3.2 billion net worth estimate.

The Federal OGE form does not require precise numerical values for these estimates. All a candidate needs to put is a wide range. For example, Kanye estimates the total value of "Yeezy Construction, LLC" at $250,001 – $500,000.

Most importantly, the highest number someone has to use as a value estimate is $50 million.

Those exact assets are what give Kanye billionaire status.

Over the next six years (including 2020) Kanye is projected to earn more than $2 billion in royalty payments from Adidas. At that point, if all goes go plan, the Yeezy brand will be worth $2-3 billion.

Total it all up and the combined present value of his future royalty payments and the future value of Yeezy is somewhere between $2.4 and $3.2 billion. That's present value to Kanye today.

When combined with his roughly $200 million in other assets, his after tax present value net worth today is at least $3 billion.

According to his OGE Form 278e, Kanye owns 100% of the following LLCs: 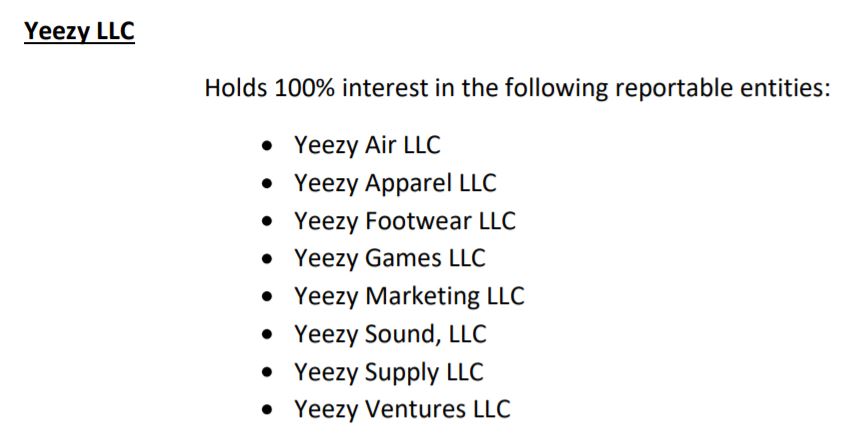 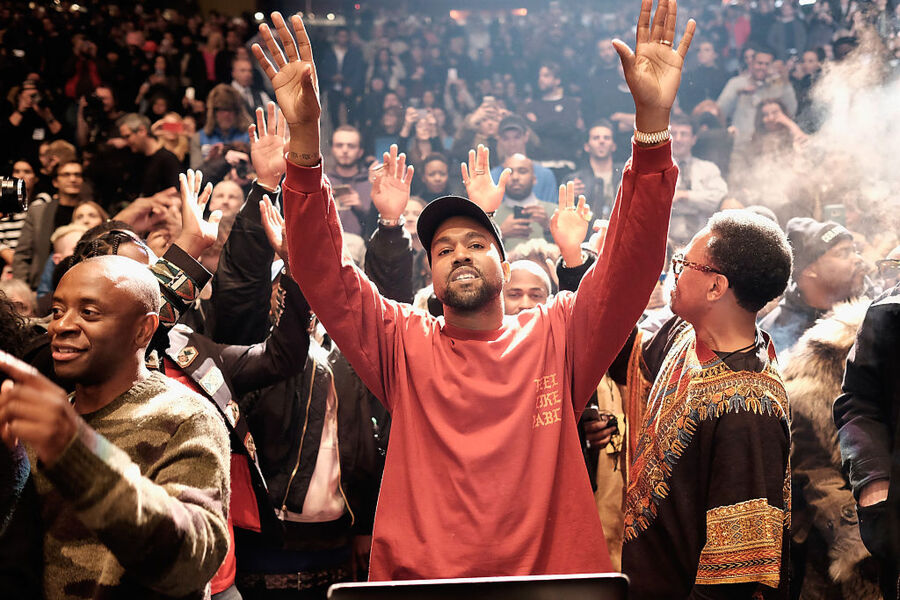 If Kanye ultimately does not move into the White House in January, he can retreat to a number of valuable properties. How many properties? Glad you asked! Here's a full breakdown of Kanye's real estate assets from the OGE filing: 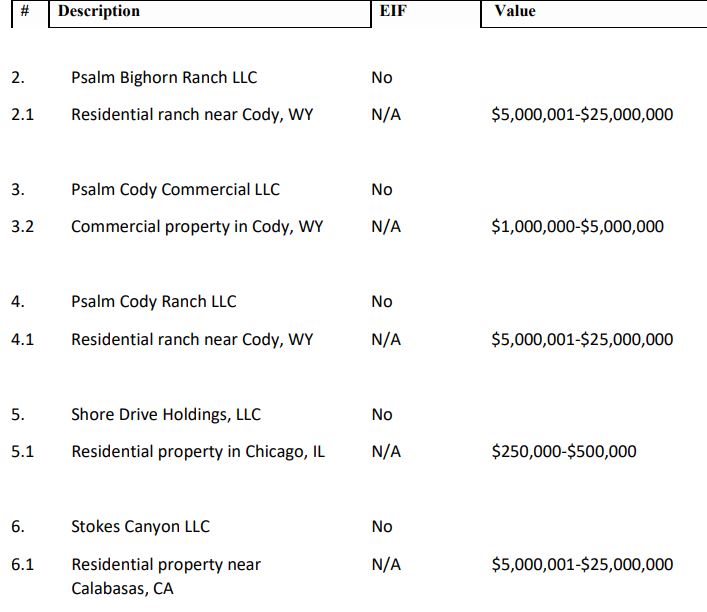