Despite Having Enormous Separate Net Worths, Kim Kardashian And Kanye West Are About To Have The Most Boring Celebrity Divorce, Ever

By Amy Lamare on February 19, 2021 in Articles › Billionaire News

People have been speculating about the status of Kim Kardashian and Kanye West's relationship for months now. Maybe even years. Well, now we know. Earlier today, Friday, February 19th, Kim Kardashian filed for divorce from her husband of almost seven years: Kanye Omari West. She's seeking joint legal and physical custody of their four children. If you're expecting a long, drawn-out, bitter and expensive divorce… we have some bad news. This is about to be the most boring and civilized celebrity divorce ever – and you know what? Good for them! Reportedly, a source close to the soon-to-be former couple said the split is amicable and there is no drama. Again, good for them. Their seeming reasonableness over the split is a good example to set for their children: North (7), Saint (5), Chicago (3), and Psalm, who is 21 months old. They apparently came to the marriage with rock-solid prenups that clearly separated their various business empires. Neither Kim nor Kanye are contesting that prenup and they are apparently well down the path of figuring out how to split their surprisingly-few joint assets.

Kim and Kanye first met in 2003 through their mutual friend Brandy. Kanye admitted early on he had a crush on Kim. In 2009, he used Kim's name in his song "Knock You Down," singing "You were always the cheerleader of my dreams".

Kim started dating Kanye in the spring of 2012. By December of 2012, she was pregnant with their first child, their daughter North, who was born in June 2013. Kanye proposed in October 2013. They married in a lavish ceremony in Italy. They had their first son, Saint, in December 2015. Daughter Chicago was born in January 2018. Son Psalm was born in May 2019.

In July 2020, Kanye announced his run for President. Apparently that's where everything seems to have really started to go off the rails for the couple. Kanye had public meltdowns on Twitter admitting he once considered aborting North but Kim refused. He also called Kris Jenner "Kris Jong Un." Kanye was reportedly late for Kim's 40th birthday party in October 2020. Then the couple did not spend Thanksgiving together. In January 2021, Kim went on vacation with her sisters. She started posting pictures on Instagram without her wedding ring. People began to wonder. 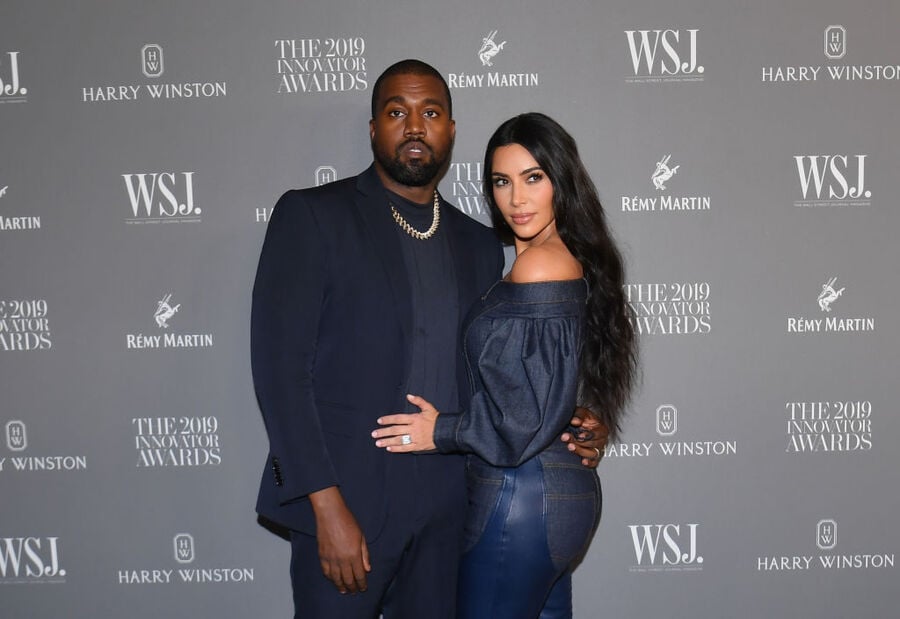 Now it's been confirmed that the former couple have had very little contact with each other since October when they reportedly argued at her 40th birthday party in Polynesia.

Fun fact: This is actually Kim's THIRD divorce. Many people don't realize she was married to a music producer named Damon Thomas from 2000 to 2004. This is Kanye's first divorce.

Kim Vs. Kanye Net Worth

Kim Kardashian's net worth is $900 million. Despite being a reality TV star for many years, the majority of her fortune comes thanks to her KKW beauty and fragrance line and her line of shapewear, SKIMS.

Kanye West's net worth is worth $3.2 billion, mostly due to his Yeezy line of shoes and apparel.

Their divorce is surprisingly uncomplicated despite their massive combined and individual net worths. But is that really surprising? Kris Jenner would not have let her daughter go into a marriage with someone so high profile without protecting her.

Kim and Kanye have kept all of their business interests and money separate throughout their marriage, which helps in keeping the divorce uncomplicated. Their only joint property is their Hidden Hills, California mansion, which is where Kim and the kids have been living. Kanye has been at his ranch in Cody, Wyoming for the past several months.

Kim and Kanye just have to decide how to settle the matter of their mansion in Hidden Hills. They bought the house from Lisa Marie Presley in August 2014 for $20 million and proceeded to spend the next two years fully remodeling. Unfortunately, Kanye wasn't happy with the final product in 2016, so they started over from scratch. Today, the property covers three acres and features two swimming pools, two spas, a private vineyard, a full-sized basketball court, and a custom-built mansion. In 2018 they had to evacuate when a wildfire came uncomfortably close to their property. Kim and Kanye were forced to call in private firefighters provided by their insurance company to save their mansion and several nearby mansions. Today the Hidden Hills home is estimated to be worth $60 million.

Kim and Kanye attended marriage counseling together to try and save their marriage. Kim has also been in individual counseling. She plans to focus on her business empire going forward. She is launching a skincare line in 2022 and has plans to further expand KKW Beauty into hair and nails as well. The good news is, Kim and Kanye are reportedly committed to co-parenting their four children. It's so nice to see two rich and famous celebrities having an amicable divorce and focusing on their children, together.