Last month, billionaire David Geffen sold his beach house on Malibu's exclusive Carbon Beach in an off-market deal that made international headlines for its record setting $85 million price tag. What wasn't known when the deal made the news was the identity of the new owner. Property records indicate that the buyer is a corporate entity out of Miami. Now, it has finally been revealed that the buyer of Geffen's Malibu beach pad is none other than 57-year-old billionaire and Los Angeles Dodgers owner Mark Walter. Walter is the founder and CEO of Guggenheim Partners, an investment firm managing roughly a quarter of a trillion dollars. Walter has a net worth of $1.75 billion and is best known to Angelinos as the man who jumped in with $2.15 billion and rescued the Dodgers both from the era of Frank McCourt and from bankruptcy.

Walters' new Malibu house is on one of the more expensive and coveted beaches in the world. The complex is situated over two lots and contains a number of gray shingled buildings that include a large main house, two guesthouses, and a freestanding building that serves as a screening room. The beachfront home also has a swimming pool and an outdoor living room complete with a fireplace. 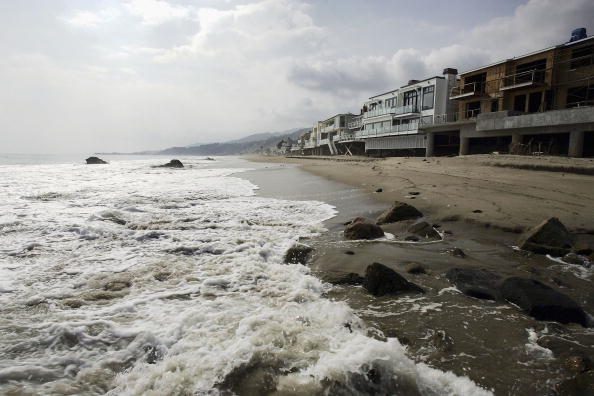 This sale sets the record for the highest amount paid for a single family property in Malibu. The previous record price was set in 2013, when Oakley founder Jim Jannard paid $74.5 million for a 9.5 acre bluff top estate.

The Carbon Beach house appears to be the first residential property bought by Mark Walter and his wife Kimbra in the Los Angeles area. Their main home has been a 26,000 square foot chateau-style mansion in Chicago's Lincoln Park neighborhood. The house sits on at least seven lots that the Walters acquired in a number of deals for a total of $9 million. They also own a $2.4 million, 3,500 square foot home in Aspen, and a 7,400 acre wildlife conservation facility, resort, and conference center outside of Jacksonville, Florida called White Oak Plantation that the couple bought for about $17 million.

Now that David Geffen has offloaded his Carbon Beach pad, he's far from homeless. The music and media mogul owns residential properties in New York City and the Hamptons worth more than $150 million. In Los Angeles, he still owns the former Jack Warner estate in Beverly Hills which he bought way back in 1990 for $47.5 million. He also still has a quaint, two bedroom, two bathroom cottage on Carbon Beach he bought for $9.8 million in 2008, which he listed recently for $8.995 million.