On Sunday, the real battle between the Philadelphia Eagles and New England Patriots will take place on the gridiron in Minneapolis during Super Bowl LII. But this is Celebrity Net Worth and we're obsessed with billionaires. Eagles owner Jeffrey Lurie and Patriots owners Robert Kraft are both billionaires. You have to be to own a professional sports franchise these days.

The Patriots seem unstoppable. The team has been one of the most dominant teams of the last decade under coach Bill Belichick and quarterback Tom Brady. But back in 2000, no one would have predicted that the Patriots would rise to this level of dominance. After all, they had just selected a relatively unknown quarterback from the University of Michigan named with the 199th overall pick, in the sixth round of the NFL Draft. Looking back, I'm betting owner Robert Kraft had an inkling all the pieces were falling into place for his team.

After getting his B.A. and MBA, Kraft went to work for the Rand-Whitney Group, a packaging company owned by his father-in-law. In 1972, Kraft founded International Forest Products, a company that trades physical paper commodities, an activity closely related to that of his father-in-law's business. Combined, Rand-Whitney Group and International Forest Group make up the largest privately-held paper and packaging company in the US. It's not a sexy business, but it did allow Kraft to amass enough money to eventually buy the New England Patriots. 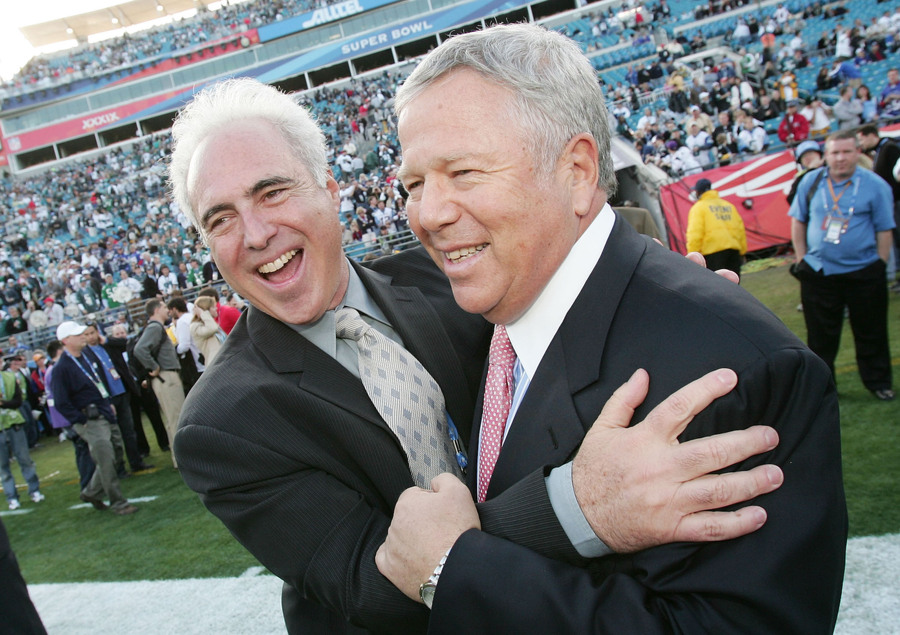 Robert Kraft has been a season ticket holder of the Patriots since 1971. He purchased the New England Patriots in 1994, saving the team from a move to St. Louis. It's an interesting story overall, how Kraft came to own the Patriots.  Under Kraft, the New England Patriots have won 17 AFC titles from 1996 to 2017 and they've been to eight Super Bowls between 1996 to 2016. They've won five of those Super Bowls including last year's victory over the Atlanta Falcons. Robert Kraft has improved the New England franchise immeasurably under his ownership. He has a net worth of $6.4 billion.

Jeffrey Lurie owns the Philadelphia Eagles. If any team can beat the venerable Patriots, it is the scrappy Eagles. Lurie actually tried to buy the Patriots in 1993, but was unsuccessful. In May 1994, he bought the Eagles for $195 million. He didn't have that in his checking account. In fact, he took out a $190 million loan from a bank to buy the Eagles. If that isn't scrappy and determined I don't know what is!

Lurie had a little help from the family business. Lurie and his mother used stock in General Cinemas to secure the loan. Lurie's grandfather, Phillip Smith, founded the chain of movie theatres in 1935. The family fortune grew by leaps and bounds as the company expanded over the decades. General Cinemas evolved into Harcourt General, Inc., a nearly $4 billion company with interests in pretty much everything from movie theatres to Pepsi to publishing to department stores. Lurie didn't want to be in the family business. Instead he got his PhD and became a college professor. He joined the family business in 1983 but by 1985 was out on his own with a production company making films, TV shows, and commercials. He even has an Oscar on his mantle for the 2011 documentary Inside Job.

The Philadelphia franchise has never won a Super Bowl. The Eagles were NFC Champs in 1980 and 2004, but came home on the losing end of the Super Bowl. They are the ultimate underdog in Sunday's Super Bowl LII. When it comes to net worths, Lurie is also the underdog to Robert Kraft. Jeffrey Lurie has a net worth of $2 billion.

The Patriots and the Eagles last met up in football's biggest game in  Super Bowl XXXIX in 2005. The Patriots won that match 24 to 21.

Who do you want to win Super Bowl LII?