By Brian Warner on January 17, 2018 in Articles › Billionaire News

Remember a week ago when we wrote about a currency called Ripple? In case you missed that story, here's a very brief recap:

Ripple bills itself as "using blockchain technology to build the payment system of the future". Fans of Ripple will tell you that the coin is much faster and more flexible than Bitcoin at handling financial transactions at a massive scale.

When Ripple hit an all-time high of $3.84 on January 4, Larsen's personal holdings were worth $60 billion.  That was enough to make him 7th richest person on the planet… on paper. He was richer than guys like Larry Page, Carlos Slim, Larry Ellison, Michael Bloomberg. Literally the list of the richest people in the world went: Jeff Bezos, Bill Gates, Amancio Ortega, Warren Buffett, Mark Zuckerberg, Bernard Arnault, CHRIS LARSEN!

Well, what goes up… must come down. HARD and fast.

Ripple has been especially pounded in the last 48 hour crypto bloodbath. The currency has fallen 74% from that all time high of $3.84.

And with the fall, around $44 BILLION in paper wealth has been slashed from Chris Larsen's net worth. 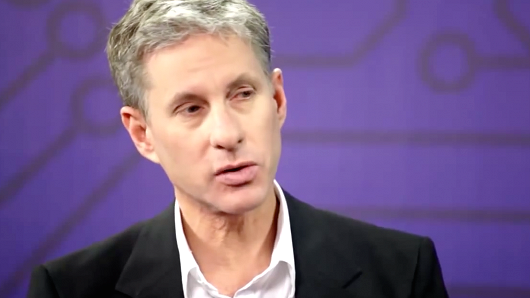 He's still worth around $16 billion which is obviously very impressive, but there's another major challenge (in addition to the wild and unpredictable price changes of XRP) – Larsen's holdings are extremely illiquid. If he wanted to sell a significant stake, who is going to buy the other side of his transaction? Is there enough demand from regular people for him to sell $1 billion worth of coins? How about $100 million? $10 million? Hopefully he's selling a small consistent amount every day to create a large personal nest egg that doesn't completely flood the market and tank the price even more.

Where do you think Ripple, Bitcoin and other currencies will be in a year? Are you buying more now that the price has dropped or are you running for the exits?