By Amy Lamare on January 31, 2020 in Articles › Billionaire News

It has been 50 years since the Kansas City Chiefs have made it to the Super Bowl. This Sunday, the team is heading to Miami to face off against the San Francisco 49ers in Super Bowl LIV. The Chiefs have been in the Hunt family since the team's founding in the AFL days. Clark Hunt is the grandson of oil magnate H.L. Hunt, and said to be the inspiration for J.R. Ewing's character on Dallas. Clark's father Lamar was one of the co-founders of the American Football League, and the person who came up with the name Super Bowl. The AFC Championship trophy is named after Lamar Hunt. When Lamar passed away in 2006, Clark inherited the Chiefs. Under the ownership of the 54-year-old, the Chiefs are going to the big game for the first time in five decades.

Hunt is the chairman of his family's sports empire, so it had to be touching to be awarded a trophy named after his father. Lamar Hunt was instrumental in creating the NFL, after all. Arrowhead Stadium is Clark's family's second home – literally. Hunt, his wife Tavia, and their three children have a six-bedroom, two-story apartment atop the owner's box in the stadium. Their primary home is in the Highland Park neighborhood of Dallas, where Cowboys owner Jerry Jones is a friend of Clark's. 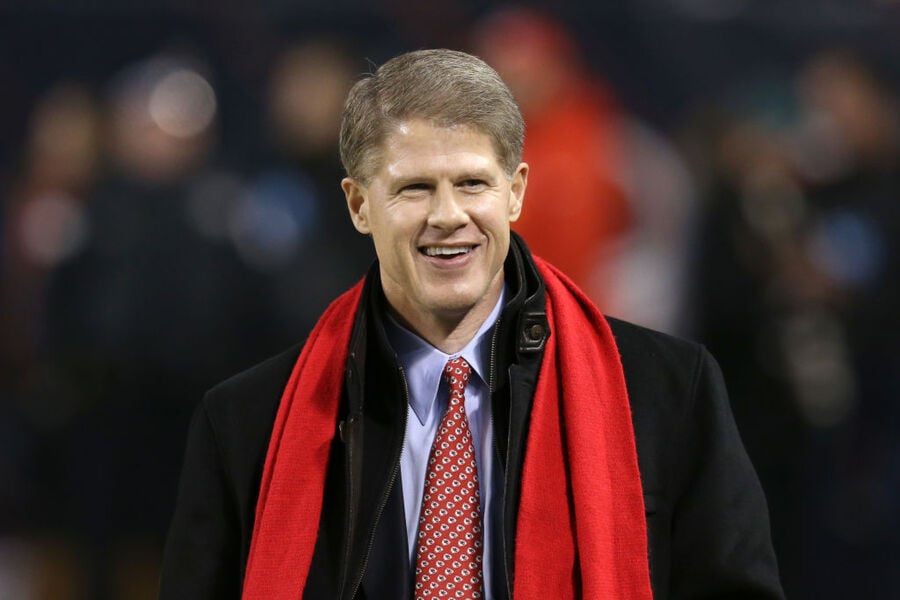 Lamar Hunt founded his professional football team as the Dallas Texans in 1960. He paid $25,000 for the franchise. Three years later, Lamar moved the team to Kansas City and changed its name to the Chiefs. Lamar was a founder of the AFL and Major League Soccer – in fact, he brought pro soccer to the U.S., he created World Championship Tennis, was an original investor in the Chicago Bulls, and, oh yea, let's not forget he coined the name Super Bowl. His widow, Norma Hunt is one of the very few people who have been to every Super Bowl since the first in January 1967.

Clark was four years old in January 1970, when his parents took him to his first (and the Chiefs' last) Super Bowl. Kansas City beat the heavily favored Minnesota Vikings 23-7 at New Orleans' Tulane Stadium.

Clark graduated from Southern Methodist University in 1987. He was the top of his class in business school and graduated with a degree in finance. He also played soccer for SMU's nationally-ranked soccer team for all four years, was team captain, and an Academic All-American. After graduating, Clark worked for Goldman Sachs as an investment banker in New York City and Los Angeles. After two years, he moved back to Dallas to work for his dad. In 2005, a year before his dad died, he officially turned the Hunts Sports Group over to Clark. He had just turned 40.

The Hunts Sports Group owns the Chiefs, FC Dallas, and a chunk of the Chicago Bulls. The Bulls are the NBA's fourth most valuable franchise at $2.9 billion. The Chiefs were worth $2.3 billion at the beginning of the 2019 season. The Hunt family's soccer team FC Dallas is valued at about $200 million. The family's sports empire alone is worth more than $3 billion. Clark Hunt has a personal net worth of $2 billion.

At the end of the 2012 season, things with the Chiefs franchise were grim. The 2012 Chiefs became the first team since the 1929 Buffalo Bisons to not lead in regulation through any of their first nine games. The Chiefs tied their franchise worst record of 2–14. They were so terrible, they got the #1 pick in the 2013 NFL Draft. Clark sent a one-page letter to season ticket holders that basically said: "I want you to know that this city deserves better than what we provided. We can do better. And I promise you, we will do better."

Clark hired Andy Reid as head coach and cleaned house. He restructured the team's leadership so that the head coach, general manager, and team president all reported directly to him. Then he let them do their jobs. And this season is proof that formula worked.

Hunt was one of five NFL owners NFL commissioner Roger Goodell chose to directly negotiate the league's collective-bargaining agreement in 2011. Hunt is chairman of the NFL finance committee and he's a member of the conduct, international and management council executive committees. He's also one of the youngest board of trustees in SMU history. He's president of the board of trustees at his alma mater St. Mark's School of Texas.

He is married to Tavia Shackles, a former Miss Missouri Teen USA and Miss Kansas USA. The couple have three children, Knobel, Gracelyn, and Ava. Philanthropically, he and his wife focus on children's health and youth education and the Special Olympics.