It has not been a good year for Chinese education entrepreneur Larry Chen. At the beginning of the year Larry was sitting on top of the world. He was a celebrated global tech tycoon with a net worth of $16 billion. Fast forward a few months and, tragically, Larry is no longer even a billionaire. In fact, around 99% of his net worth has completely evaporated.

From School Teacher To Billionaire

Unlike most of the world, Larry Chen had an amazing 2020. As the founder of online education platform Gaotu Techedu Inc., Larry saw his fortunes soar as the world went into lock down mode. Gaotu creates online education and tutoring software which was suddenly in extremely high-demand as Chinese school kids were stuck learning from home for months on end. The company also offers foreign language and professional training courses for adults.

Larry's rise was especially impressive and inspirational when you consider his backstory. He is not a serial entrepreneur. Larry is a former school teacher from an extremely remote town in China.

He led the company as it went public in June 2019 under the ticker symbol "GOTU."

GOTU spent most of the next 5 months trading right at $10 without much movement. Towards the end of 2019 the price ticked up a bit, to $15 and then around $20 as the year ended. At that level, Larry Chen – the former middle school teacher – was a billionaire.

The stock declined slightly in the back half 2020 but by late January 2021, the price per share topped $100, then $145. At that level, Larry's net worth was $16 billion. Suddenly, this former school teacher was several billion dollars richer than Snapchat's Evan Spiegel and Twitter's Jack Dorsey.

Where is GOTU trading today?

Here's a chart of GOTU stock since the beginning of the year: 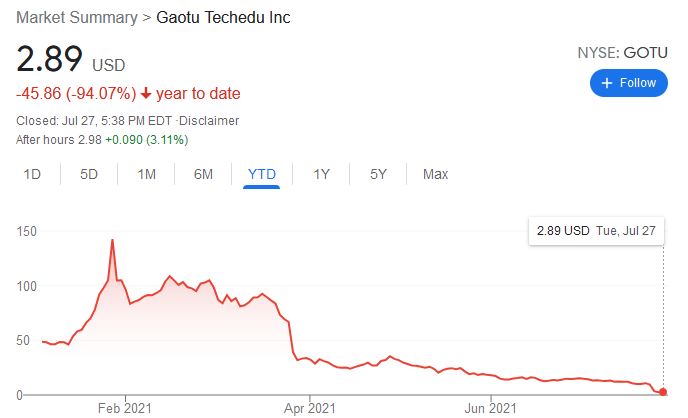 For one, Gaotu has been on the unfortunate receiving end of a number of short-seller attacks (where companies bet the stock is going to fall). An investment research firm called Grizzly Research alleged that the company had been "drastically overstating its profitability and faking enrollments."

Another short seller called Gaotu a "near total fraud" and yet another called it "the most blatant Chinese stock fraud since 2011."

In the last few weeks alone the stock dropped from around $12 a share to today's $2.89. This recent drop was related to an announcement from Chinese regulators that forbade companies that teach school curriculum to make profits, raise capital or go public. Yikes. Not good.

Why is China cracking down on tutoring companies? According to Twitter user @Dinasrinivasan, Chinese President Xi believed that private tutoring companies were leading to social pressure, income inequality and low birth rates.

Where Does Larry Chen's Net Worth Sit Today?

At the company's late January share price peak of $145, Larry Chen was briefly worth $16 billion.

So, in other words roughly 99% of Larry's wealth has evaporated in almost exactly six months.

It's unclear how the company can survive at all going forward considering those new regulations. Is the company now essentially barred from making a profit?

Whatever the answer, even though Larry Chen technically still has vastly more money than me, I still probably wouldn't trade my problems for his problems right around now.