The Chinese Billionaire Who Just Bought A $170 Million Painting Used To Be A Taxi Driver!

By Amy Lamare on November 15, 2015 in Articles › Billionaire News

The art world was stunned earlier this week when a celebrated Amedeo Modigliani canvas sold for $170.4 million to a mysterious Chinese billionaire. At the time of the sale, Christie's did not release the buyer's name. We have since learned that the buyer was Liu Yiqian, a former taxi driver turned billionaire who lately has been stirring up buzz for his art purchases.

The 52-year-old Chinese billionaire placed his bids by phone from Shanghai for the 1917-18 painting "Nu Couché," during the New York City based auction. The $170.4 million price tag was nearly $100 million more than the previous auction record of $70.7 million for a Modigliani painting.

Liu and his wife, Wang Wei, are largely considered to be the kind of art collectors who have so much money that they just buy the most expensive pieces. They are not the sort of collectors who could be called art connoisseurs. Liu is aware of what people in the art world say about him. He actually calls himself a "tuhao" – a Chinese term for someone who came into money but hasn't acquired the same level of cultural refinement. "Nu Couché" is the most expensive piece of art in the couple's collection. 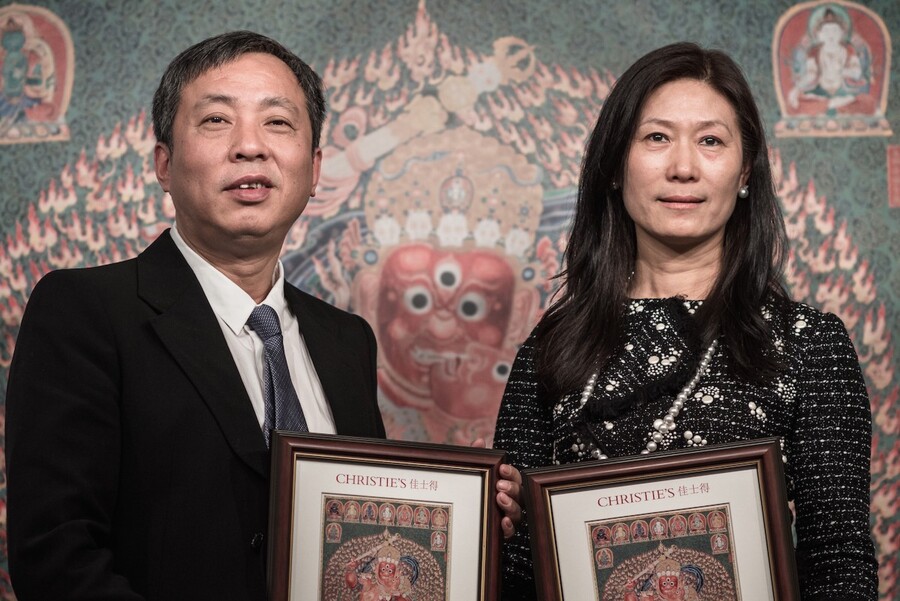 Liu has quite a wild rags-to-riches story. He was born into a working class family in Shanghai and dropped out of school when he was 14 to help his mother sell handbags on the street. Soon, he figured out a way to make the bags cheaper and therefore sell more of them than other vendors. It wasn't long before his mother was able to rent her own shop due to Liu's ideas and improvements in her business. At the same time, Liu also bought a taxi and worked tirelessly as a driver. His life started to change in his 20s when he made his first investment in the stock market. That initial investment grew into two million Yuan and started him on the road to the billionaire he is today. Liu has made his fortune through stock trading in real estate and pharmaceuticals. Liu has a net worth of $1.5 billion.

Liu and his wife have been spending their money building their art collection. He has quite a strategy for identifying works worth bidding on. Whenever he sees other bidders bidding, he throws a bid into the mix. What has resulted is a collection full of rare Chinese artwork. The couple has built a large collection of both contemporary and traditional Chinese art, which they display in their two Shanghai museums.

Liu's collection includes a silk hanging called a thangka that dates back to the 15th century. He purchased this piece for $45 million at auction in Hong Kong in 2014. The purchase made headlines as it set the record for the highest price paid for Chinese artwork at auction.

The previous record was also held by Liu. He purchased a Ming dynasty porcelain cup known as a "chicken cup" for $36.3 million. Reportedly, he really wanted the cup so that he could see what it felt like to drink tea from it. When he posted the pictures of him sipping tea from this cup online, it caused an uproar.

Oh, and for both of these record setting purchases, Liu used his American Express card. Can you imagine the reward points he has racked up?

Liu justifies his purchases by claiming he is returning objects to China that have been taken or looted from his country over the last several centuries.