Ross Perot, self-made billionaire, two-time presidential candidate, Texan, patriot, and philanthropist has died at 89 after a five month battle with leukemia. At the time of his death, he had a net worth of $4.1 billion. The diminutive (he was just 5'6″) pioneer of the computer industry had a personality as big as Texas. He founded Electronic Data Systems Corp. in 1962 and Perot Systems Corp. in 1988. Perot was diagnosed with leukemia in February and still showed up to the office every day in his signature dark suit with an American flag pin on his lapel. His son, Ross Perot, Jr. was asked to describe his father. He boiled it down to this: "Every day he came to work trying to figure out how he could help somebody."

Henry Ross Perot was born on June 27, 1930 in Texarkana, Texas. He was the son of Lula May Perot and Gabriel Ross Perot. He graduated from Texas High School in 1947 and attended Texarkana Junior College from 1947 to 1949. He entered the United States Naval Academy in 1949 and was integral in establishing its honor system. He married Margot Birmingham in 1956.  He met his wife on a blind date when he was a midshipman in the Navy and she was in college in Baltimore. They remained married until his death today. 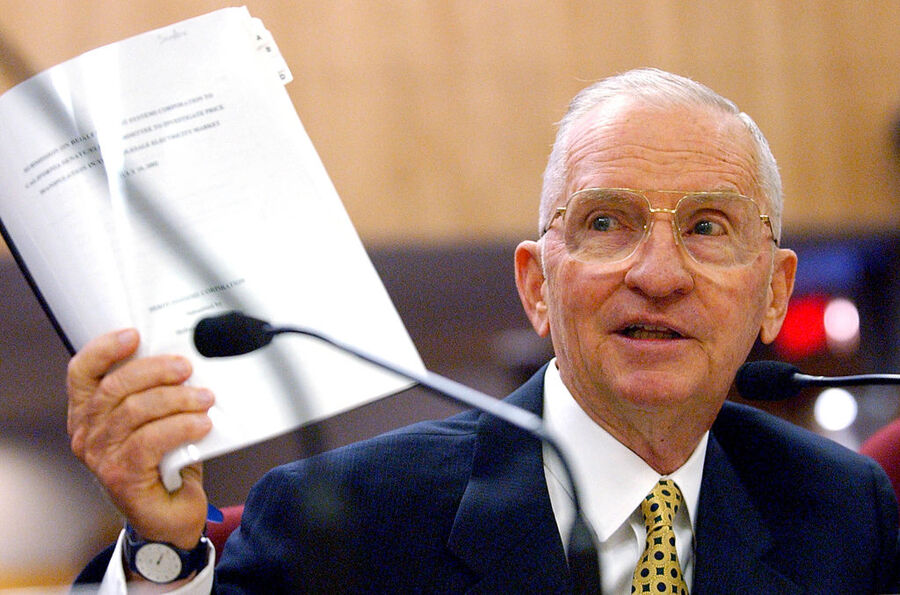 After Perot got out of the Navy in 1956, he became a salesman for IBM where he quickly became a top employee. One year, Perot made his annual sales quota in just two weeks. He had big ideas and tried to pitch them to his bosses, who ignored him. Perot left IBM in 1962 and founded Electronic Data Systems (EDS) in Dallas with a $1,000 loan from his wife. Perot had firsthand knowledge of how inefficiently IBM's customers were using their system, so he set out to change that. Perot approached corporation after corporation, pitching his data processing services and was turned down 77 times before he signed his first client. EDS went on to receive lucrative government contracts in the 1960s. The company was tasked with computerizing Medicare records. Perot took EDS public in 1968. The stock rose from $16 a share to $160 a share within a handful of days. He became a multi-millionaire.

In 1979, just before the Iranian Revolution, Iran's government imprisoned two EDS employees over a contract dispute. Perot organized and sponsored their rescue. The rescue mission was led by Arthur "Bull" Simons, a retired U.S. Army Special Forces Colonel. The resulting rescue was retold in a book by Ken Follett, which became a 1986 mini-series called On Wings of Eagles.

In 1984, GM bought controlling interest in EDS for $2.4 billion ($5.9 billion today, adjusted for inflation), making Perot a billionaire. Perot and then GM head Roger Smith butted heads over things like underfunded pension plans for employees while top management's retirement plan was well funded. In 1986, GM paid Perot $750 million for his remaining stock in EDS. He agreed to sever all ties with GM and EDS. One thing though, GM forgot to get a noncompete agreement from Perot.

In 1988, Perot, his son Ross Perot Jr., and a handful of former key EDS employees launched Perot Systems. The IT services company grew to more than 23,000 employees and had annual revenue of $2.8 billion when Dell acquired it in 2009 for $3.9 billion.

On February 20, 1992, Perot appeared on Larry King Live to announce his candidacy for president with one caveat – his supporters had to get his name on the ballot in all 50 states. He ran as an Independent on a platform of balancing the federal budget and opposing gun control. He ended up with 19% of the popular vote without receiving a single Electoral College vote. This sealed Bill Clinton's win over President George H.W. Bush. He ran again in 1996 and got half as many votes.

Perot was also an active philanthropist through his Perot Foundation. In 1984, Perot bought an early copy of the Magna Carta, which he lent to the National Archives in Washington, D.C. He sold it in 2007 for $21.3 million. The funds were used by the Perot Foundation for "medical research, for improving public education, and for assisting wounded soldiers and their families."

Perot even had a hand in Steve Jobs' success. After Jobs left Apple to found NeXT, Perot was his angel investor. He believed in Jobs' vision and didn't want to miss out on investing as he had with Bill Gates and Microsoft.

Ross Perot and his wife Margot had five children, Ross Jr., Nancy, Suzanne, Carolyn, and Katherine. He leaves behind 19 grandchildren.