Billionaire Marc Benioff To Shareholders: Do Good In The World And Watch Share Price Rise

By Amy Lamare on December 5, 2015 in Articles › Billionaire News

Billionaire Marc Benioff has grown Salesforce into one of the biggest software companies in the world over the last 16 years. Benioff has a net worth of $3.2 billion. However, it is not all business with Benioff and it never has been. He's been active for a long time in philanthropy and social activism. In fact, while Benioff made his money building a global software company, he's now convinced that giving to philanthropy and fighting for social justice is truly the way to be wealthy.

Marc Benioff was born and raised in the San Francisco area. He graduated from Burlingame High School in 1982. While still in high school, Benioff created and sold his first software application, How to Juggle, for $75. When he was 15 years old, he founded Liberty Software, where he created and sold games for the Atari 8-bit computed. By the age of 16, Benioff was making enough money to pay for college. He enrolled at the University of Southern California. While in college, he had an internship as a programmer in the Mac division of Apple. He graduated from USC with a BS in Business Administration in 1986. After college, Benioff took a customer service position at Oracle. He remained at Oracle for 13 years, eventually becoming the enterprise software giant's youngest Vice President.

Benioff founded cloud-computing software company salesforce.com in the spring of 1999 in an apartment in San Francisco. From the start, he set the company mission as The End of Software®. The USC alumnus is credited with turning the software industry upside down, by focusing on software as a service rather than traditional enterprise software. Even so, that is not the main reason he is so well known. 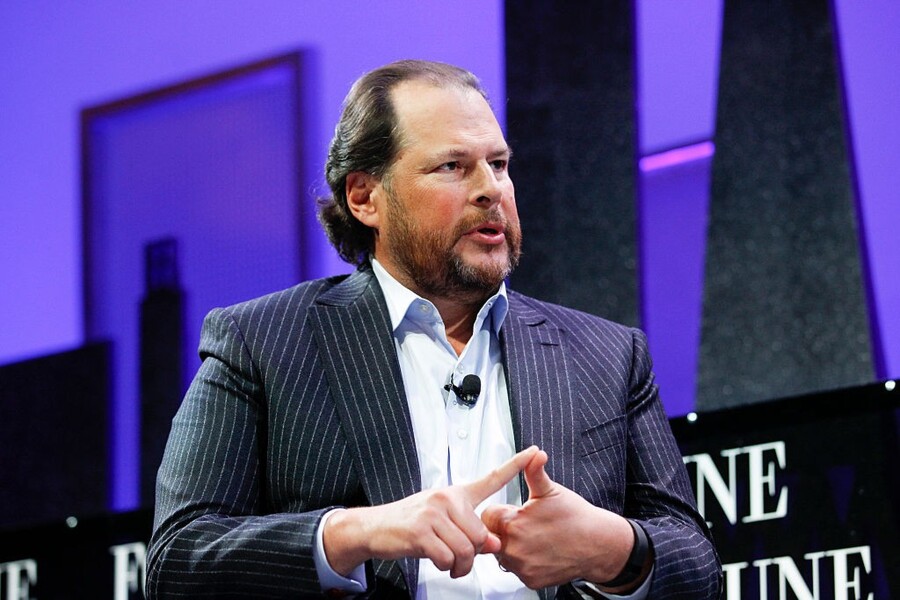 Benioff is best known for creating the 1:1:1 corporate charity model, where companies give away 1% of their equity, 1% of their employees' time, and 1% of their product to charity. He's also donated $200 million of his personal net worth to build a children's hospital in San Francisco. And as if that wasn't enough, he's also virtually going door-to-door to San Francisco and Silicon Valley companies, imploring them to give more to their communities.

Lately, Benioff has taken up social justice as his pet cause. He helped bring down state laws that could have encouraged discrimination against LBGQT people. He has also been advocating for equal pay and opportunity for women, after being called out on that in his own company this year. Benioff looked at the salary of every female employee and then issued raises totalling $3 million to those he found to be underpaid.

Perhaps most importantly, Marc Benioff isn't afraid to talk about all of it. He feels that salesforce.com is showing how going out and doing good in the community and the world is a good thing for shareholders. Benioff's approach to business is not the traditional "the business of business is business" with a focus on shareholder value. Benioff's approach is on stakeholder value, which posits that if you do right by ALL of your stakeholders – customers, employees, partners, the community, and the environment – the stock price will rise.

As evidence, Benioff urges people to look at salesforce.com's 10-year chart on Yahoo Finance. Since 2005, the stock in Benioff's company has gone from less than $5 a share to nearly $80 a share.

Stakeholder value isn't a new idea, but if it can gain traction, it could be an excellent way to curb the grotesque corporate greed many companies have become known for.

Benioff believes that the droves of Millennials entering the workforce will also influence the progression of stakeholder value. Millennials want to have meaning in their work. Like Say Anything's Generation X Lloyd Dobbler, Millennials:

Millennials are attracted to companies that have a strong sense of social justice.

Benioff believes that businesses are the best platforms for change and giving in the world. He believes that over the next two decades, more and more CEOs will shift to stakeholder value over shareholder value.

The old ways of doing business are dying. This would not be the first time Benioff was right. Salesforce.com's enormous success was not a given when he started the company. Enterprise software ruled the industry. Benioff disrupted and changed that. Now he's trying to change the world for good.