By Amy Lamare on June 1, 2020 in Articles › Billionaire News

The gaming industry certainly attracts some colorful characters. Steve Wynn, Sheldon Adelson, Donald Trump…and Stanley Ho. Ho passed away this week at the age of 98. He is largely credited with turning Macau into the Las Vegas of Asia who got his start as a smuggler and who allegedly had close ties to the 14K and Sun Yee On crime syndicates in Hong Kong. He was also a flamboyant and charismatic man with 17 children as well as a major philanthropist and construction tycoon with business interests across the globe. Ho had 20 casinos in Macau and brought in almost 50% of the region's tax revenue and was worth about $7 billion. He retired two years ago at age 96.  Ho was not only a casino magnate, but he was also an accomplished ballroom dancer. He built Macau's gaming industry under a monopoly license until 2002 when foreign investors arrived and the boom in building casinos and resorts picked up steam.

Stanley Ho was born in 1921 in Hong Kong to a wealthy and politically connected family that had made money from the British trading company Jardine Matheson. His great grandfather Charles Henry Maurice Bosman was of Dutch Jewish ancestry and his great grandmother was Bosman's Chinese mistress Sze Tai. His grandfather Ho Fook, was the brother of the successful merchant Sir Robert Hotung. During the Great Depression in the mid-1920s, the family, like so many others, fell on hard times. Ho was the ninth of 13 children of Ho Sai-kwong. He studied at Queen's College Hong Kong and the University of Hong Kong. Ho's university studies were cut short by the outbreak of World War II in 1942. 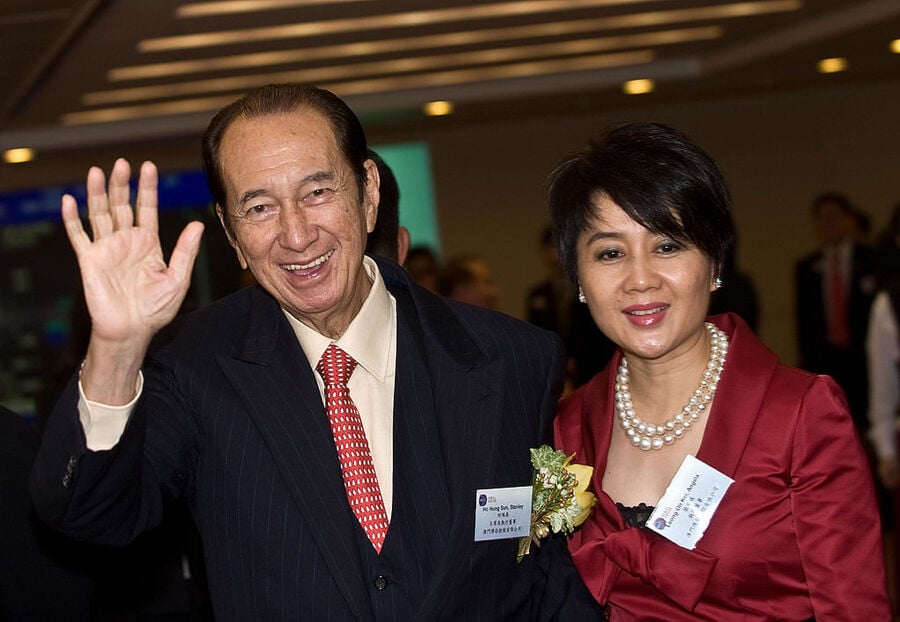 During World War II, Ho fled to Macau, then a Portuguese colony when Hong Kong was captured by the Japanese. He had just a few dollars to his name. With $10 in his pocket, Ho set out to make his fortune. He smuggled goods into China. He was successful at this because he was smart enough to include the Japanese in his dealings. He was not even 24 yet and already on his way to a massive fortune as one of the key players in the postwar reconstruction of Hong Kong.

By 1961, when he was 40, he was wealthy enough and connected enough to secure the monopoly for Macau's then brand new legal gambling industry. This is what made Ho his billions. But he also worked for them. He knew he had to attract wealthy high rollers, so he built a harbor for the high-speed boats ferrying gamblers from Hong Kong to Macau. Ho is credited to turning Macau into the world's biggest casino center – even bigger than Las Vegas – and was the sole player in the territory's gambling industry until Sheldon Adelson's Sands China decided to move into Macau and give Ho some competition.

Allegations of Ho's ties to organized crime have followed him for years, despite his many denials of being connected to the violent Hong Kong-based triads. A decade ago, after an exhaustive and long investigation, the New Jersey gaming authorities found a link between Ho and the triads that forced MGM Mirage Macau, a joint venture with Ho, to divest its interest in a casino in Atlantic City. The report declared that Ho was an associate of known and suspected organized crime triads and that he had allowed organized crime to operate and thrive in his casinos. U.S. gaming officials suspected that Ho's VIP rooms at his casinos were used by the triads to launder money. He did not deny these specific allegations, but said that in the 1980s and 1990s, "anyone involved in gaming was vulnerable to such accusations." The Canadian government also found Ho to have links to the triads and several illegal activities from 1999 to 2002.

Ho had 17 children born to four women. Ho referred to his children's mothers as his wives. Polygamy remained legal in Hong Kong until 1971. Ho leaves behind 14 surviving children with four wives. His daughter Pansy released a statement saying that her father had passed away peacefully.

Sadly, the last years of Ho's life were filled with infighting amongst his large family and illness. He fell at home in 2009 and had to have brain surgery due to a stroke. After that, his family was divided by a bitter dispute for years until his gambling empire was passed on to his daughter Daisy.

Over his long life, Ho became known as Godfather and King of Gambling. Ho was also the founder and chairman of Shun Tak Holdings, through which he owned many businesses including entertainment, tourism, shipping, real estate, banking, and air transport. It is believed that his businesses employ almost one-fourth of Macau's workforce. Besides Hong Kong and Macau, he also invested in mainland China, Portugal, North Korea (where he operated a casino), Vietnam, the Philippines, Mozambique, Indonesia, and East Timor.

His wealth is divided among his daughter Pansy Ho ($6 billion)  who owns MGM Macau, his fourth wife Angela Leong  ($2.4 billion) who is managing director of Ho's holding company SJM Holdings, and son Lawrence Ho ($2.4 billion) who owns the casino and resort City of Dreams.