By Joseph Gibson on April 12, 2018 in Articles › Billionaire News

Next year, a Manhattan cultural space that's billed on its website as "the first multi-arts center designed to commission, produce, and present all types of performing arts, visual arts, and popular culture" called The Shed will open its doors. And it will be in part thanks to a recent donation from Frank H. McCourt Jr., who Barron's reports became involved with the Shed after the institution's chairman of the board recruited him due to his owning some property in its neck of the woods.

McCourt eventually became a member of the board of directors, and before his recent $45 million gift, he also contributed his vacant lot located on 30th St. and 10th Avenue to an preview exhibition called Prelude to the Shed, opening next month and right across the street from where the actual Shed will stand. Daniel L. Doctoroff, former New York City deputy mayor under Michael Bloomberg and the Shed's chairman of the board who brought McCourt on board, took a moment to explain how and why he came to ask McCourt for his help in realizing this vision:

"We had to be pretty scrappy in thinking about how to raise money for this institution. We thought the natural supporters of the property were those who had a belief in the neighborhood. When Frank's purchase become public, we reached out to him … He was really excited about the idea. For what we consider to be the first 21st century institution, we discovered that what artists needed was a really flexible space in which to collaborate. Frank thinks in non-traditional ways." 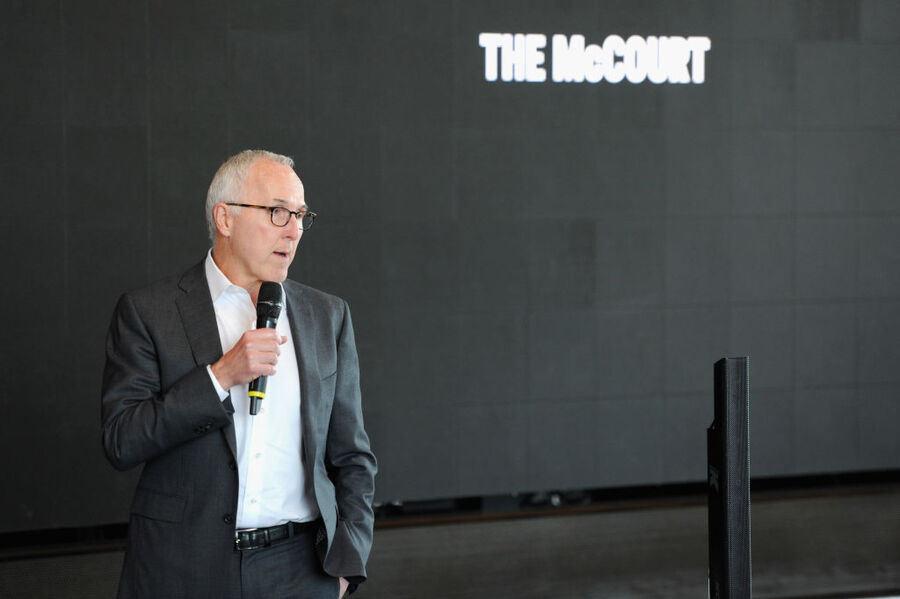 McCourt's $45 million donation went straight to the building's capital campaign, which will cover construction costs and other expenses as well as support for the first three years of the Shed's cultural programs. In exchange, the single biggest part of the Shed, a 17,000-square-foot multi-use space, will be named "the McCourt" in his honor.

As for those cultural programs, the Shed's first exhibition has already been lined up. It's an exhibit called Soundtrack of America, an overview of African-American music going all the way back to the 17th century up to today, conceived and curated by filmmaker Steve McQueen.