By Joseph Gibson on November 14, 2018 in Articles › Billionaire News

Bill Gates became one of the richest people in history through his work with computers, but now he's continuing to explore an even more important part of the daily lives in most households: The toilet. Bloomberg reports that Gates recently spoke at the "Reinvented Toilet Expo" to talk about innovations he's investing in that he thinks can save some $233 billion a year. And he wasn't shy about what he sees as the future of toilet innovation:

"The technologies you'll see here are the most significant advances in sanitation in nearly 200 years."

Through the Bill & Melinda Gates Foundation, Gates has invested over $200 million in research into sanitation. It may sound funny, but Gates' goals towards innovation in toilets have important implications, not just in financial savings, but in the health of millions of human beings who live in areas lacking enough clean drinking water or proper sanitation and hygiene. Gates said that the technology that can effectively sterilize human waste wouldn't just save $233 billion a year in medical costs, but would also help prevent nearly 500,000 infant fatalities linked to cholera and other ailments, all linked to poor sanitation and unclean water.

One of those innovations comes from the California Institute of Technology, which recently developed a system involving "an electrochemical reactor to break down water and human waste into fertilizer and hydrogen, which can be stored in hydrogen fuel cells as energy," a process that Gates describes as "super interesting" and that could represent a much needed clean energy breakthrough for the planet as well. 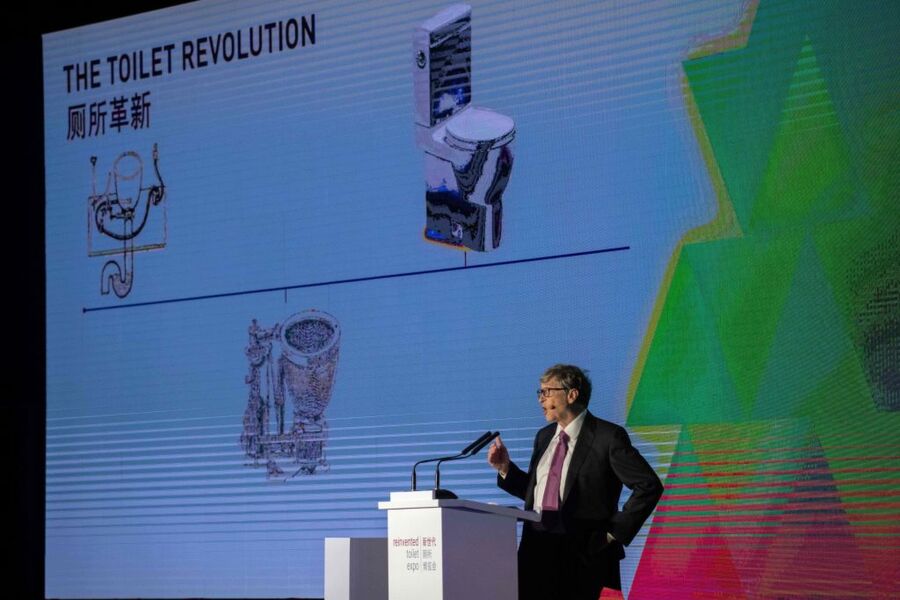 Treatment of water is an increasingly important field, as more and more people live in cities or other areas with overburdened and/or inadequate treatment facilities. Guy Hutton is a senior adviser for water, sanitation and hygiene with Unicef, and he explains in a recent interview that the breakthroughs in the field is also economically advisable:

"Human waste that is properly handled can be a very economically attractive investment due to the health benefits …  Given the unmet need of 2.3 billion people still without basic sanitation, there is a potentially very substantial market and economic gain to be had."

In his remarks at the conference, Gates said that he first became interested in sanitation about ten years ago following his retirement from Microsoft. And if that seems surprising to you, he is in agreement:

"I never imagined that I'd know so much about poop … And I definitely never thought that Melinda would have to tell me to stop talking about toilets and fecal sludge at the dinner table."