Bill And Melinda Gates Are Divorcing After 27 Years – What Happens To Their $146 Billion Fortune?

By Brian Warner on May 3, 2021 in Articles › Billionaire News

Thirty minutes ago, Bill Gates posted a message to Twitter announcing that he and Melinda Gates, his wife of nearly three decades, were separating. Honestly, I'm still a little stunned at the news. They always seemed like a happy couple who were dedicated to each other as much as they were to philanthropy. They literally run a philanthropic organization called "The Bill and Melinda Gates Foundation".

When Jeff Bezos announced he and MacKenzie Scott were separating, that was easier to grasp. Jeff is a little younger than Bill, and in the years before separating he had physically transformed from a geeky CEO to a muscle-bound world titan. So, it wasn't a total shock to learn that Jeff Bezos would throw it all out the window for a busty former weather girl. Are we soon to learn that Bill Gates has a young hot girlfriend? It's bizarre to even picture. ORRR maybe Melinda was inspired after seeing MacKenzie living her best life ever after separating from Jeff? MacKenzie already has a new husband and is on a mission to be the most charitable person on the planet.

Before this announcement, Bill Gates was the fourth-richest person in the world with a net worth of $146 billion. He trailed Bernard Arnault ($155 billion), Elon Musk ($175 billion) and Jeff Bezos ($203 billion).

Bill spent the better part of two+ decades as the richest person in the world. He lost that crown to Jeff Bezos in July 2017 and hasn't worn it since – and likely will never wear it again.

But keep in mind that Bill (and Melinda) have already given away around $50 billion of their fortune, either through direct donations or by transferring to their foundation. Had they not given any money away, today they would be potentially splitting a $196 billion fortune.

Interestingly, despite what you may assume, Bill's net worth today is actually not heavily connected to the company he co-founded, Microsoft. When Microsoft went public in 1986, he owned 45% of the company. Today he owns less than 1.3% of Microsoft's outstanding shares. He has spent the last two decades selling off huge blocks of Microsoft to diversify his portfolio and to fund The Bill and Melinda Gates Foundation.

Bill and Melinda control their fortune through the holding company they founded, Cascade Investment.

Melinda joined Microsoft in 1987 as product manager. They formally met after being seated next to each other at a business dinner not long after she joined. They dated for about a year before Bill popped the question – after he weighed the pros and cons of getting married on a white board. Melinda actually walked in and saw the pros and cons written out. Awkward!

They got married at a resort on the Hawaiian island of Lanai in 1994. Today the entire island of Lanai – including the resort which today is a Four Seasons – is owned by Bill's lifelong software rival, Larry Ellison. Bill was 38. Melinda was 29. 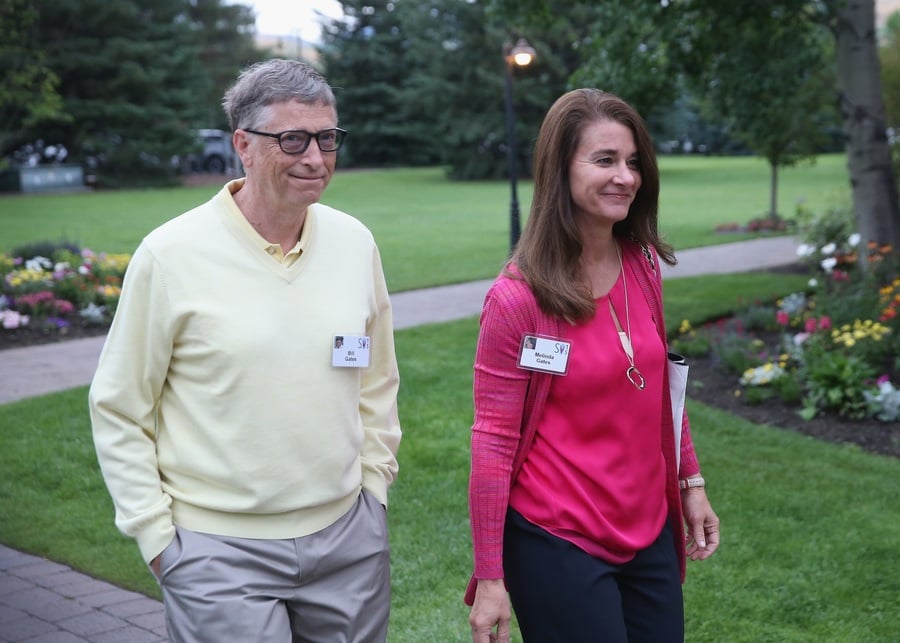 Bloomberg has already removed Bill from their list of the top 100 people in the world. I'm not sure if that's a temporary fluke or if they're just holding out until more information is released. ***UPDATE they put him back***

We are going to keep Bill in the #4 spot until we learn how their fortune will be split.

For perspective, when Jeff Bezos announced he and MacKenzie were separating (he also made the announcement over Twitter), it was in January 2019. It took just four months for Jeff and MacKenzie to announce their arrangement. The settlement called for MacKenzie to receive 20 million shares of Amazon. Jeff was left with 60 million.

Bill and Melinda's divorce would presumably be much more complicated. Their company, Cascade Investments, has meaningful stakes in dozens of public and non-public companies. For example, Cascade owns 47% of the privately-held Four Seasons Hotels and Resorts, and the Ritz Carlton San Francisco. Of it's publicly traded investments, Cascade owns 25% of Ecolab, 14% of Canadian National Railway, 4% of Berkshire Hathaway, 10% of Deere & Company, 14% of AutoNation and 34% of Republic Services.

Bill and Melinda also have an extensive private real estate portfolio which I'll summarize below:

I gotta be honest here. I'm a little sad to imagine a reality where Bill Gates is nowhere near being the richest person on the planet. As someone who has tracked the wealth of celebrities and business titans for over a decade (and has been generally interested in the subject my whole life), this is kind of a bummer.

Though to be fair, even with a net worth of $70 billion, Bill (and Melinda) would still be in the top 15 of richest people in the world. Highly respectable, just strange to think about.