By Amy Lamare on December 20, 2018 in Articles › Billionaire News

Beyoncé performed at the wedding of Isha Ambani, daughter of India's richest man, Mukesh Ambani. She joined a star-studded list of performers and A-list guests who were flown in to Mumbai on 100 chartered planes for the weekend's wedding festivities. Isha, 27, is set to marry Anand Piramal, 33, in the capital of Mumbai on Tuesday, December 11th. The festivities kicked off over the weekend in the desert city of Udaipur with three days of pre-wedding rituals including song and dance.

Isha's wedding has its own app so that guest can map out the activities, including the private concert by Beyoncé. A number of Bollywood stars, including newlywed Priyanka Chopra and her brand new husband Nick Jonas attended. The guest list also included Hillary Clinton. Hillary is a long time friend of the Ambani family. She brought long time friend Huma Abedin as her plus one.

The wedding united two of India's most influential families. Ambani is the chairman of Reliance Industries and has a net worth of $40 billion. Ambani inherited Reliance from his father. Under his guidance the company has continued to grow. Ambani and his family live in a 27-story mansion right in the heart of Mumbai that is the most expensive private home in the world. The roof has landing space for three helicopters and six floors are reserved exclusively for 168 parking spaces. The house has a 50-seat movie theater, yoga studio, health club, spa and  ballroom. Even though only six people live in the house, the building is staffed by more than 600 full-time employees. To build the property, an orphanage was demolished. The 48,000 square foot building is estimated to have cost between $1 and $2 billion. 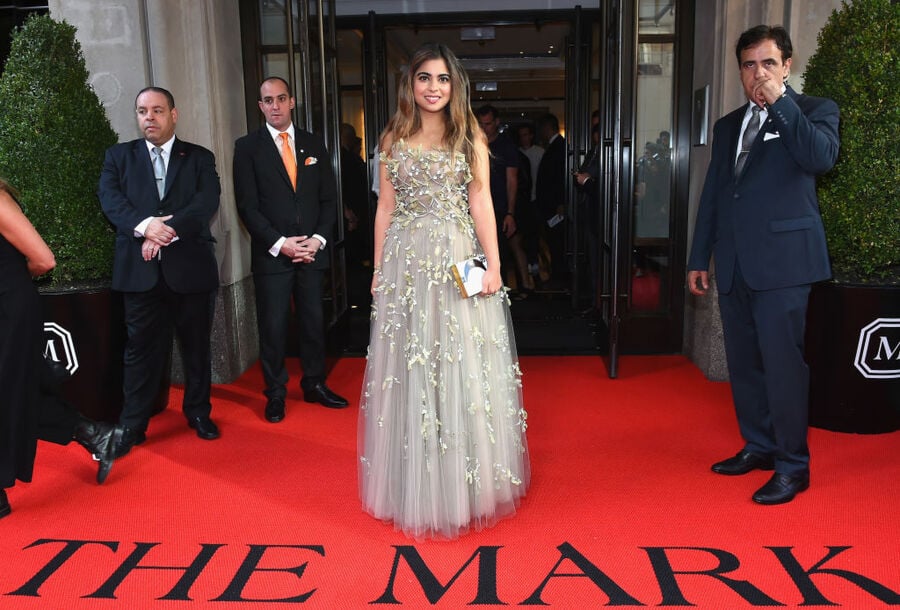 The Piramal family has interests in real estate, manufacturing and pharmaceuticals. The family has reportedly given the couple a nearly 50,000 square foot home overlooking the sea in Mumbai.

Isha Ambani is a graduate of Yale and Stanford. She sits on the boards of two companies in her father's empire. Piramal is the executive director of his family's enormous conglomerate, Piramal Group.

Invitations to the wedding came with necklaces and precious stones stacked in a two-tier floral box that cost $4136.00 each. This wedding is the latest in a series of high profile weddings in India that began last year when cricket star Virat Kohil married Bollywood actress Anushka Sharma.

Isha's wedding is being referred to by the local press as "the big, fat, Indian wedding."