French billionaire Bernard Arnault just joined the world's most exclusive club. Only he, Jeff Bezos, and Bill Gates are members. The key to entrance? Oh, just have a net worth of at least $100 billion. Arnault is not just the richest person in France, he is the richest person in Europe. He is the chairman and CEO of LVMH Moet Hennessy Louis Vuitton SE, known as LVMH. The company is the world's largest maker of luxury goods. LVMH is made up of 70 companies including Louis Vuitton, Christian Dior, Dom Perignon, and others.

Arnault is the richest person in the fashion industry. He lives in Paris and has a vacation home on the French Riviera. He made headlines in April after pledging more than $450 million towards the repair of Notre-Dame after the devastating fire that ravaged the historic church.

Arnault has been the chairman and CEO of LVMH since 1989. The company is a family business. Four of his five children work at LVMH or one of its brands. Arnault owns a 96.5% stake in Christian Dior. LVMH had more than $53 billion in revenue in 2018. 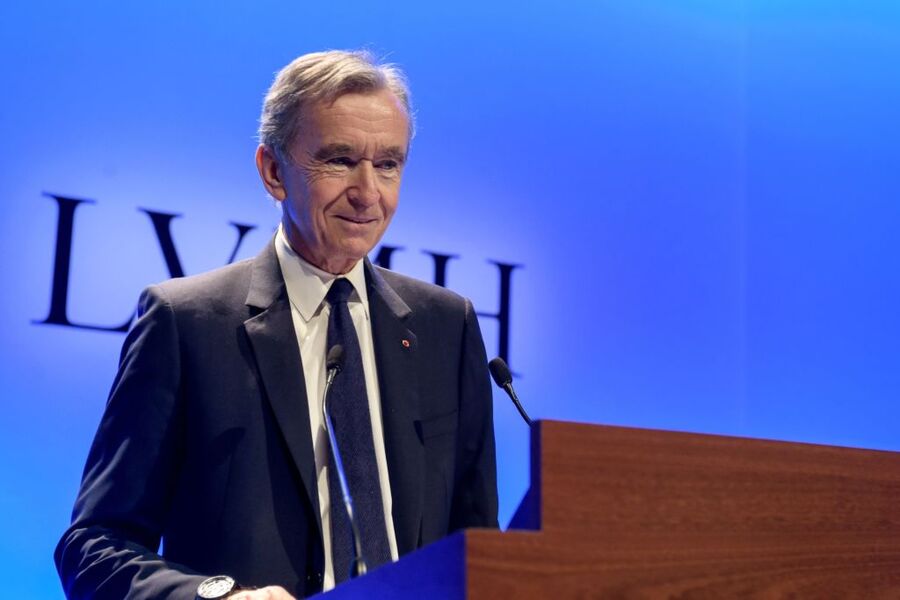 Arnault grew up in Roubaix, a town in northern France. He studied engineering at the Ecole Polytechnique. Three former presidents of France and three Nobel Prize winners are alumni of that school. After Arnault graduated, he worked for his father's construction company before getting into the luxury goods industry. In 1984 he became CEO of Financier Agache, a luxury goods holding company.

In 1973, he married Anne Dewavrin. They had two children – Delphine and Antoine Their marriage ended in 1990. In 1991, Arnault married Canadian concert pianist Helene Mercier. They have three children together – Alexandre, Frederic, and Jean.

Delphine worked for American consultancy firm McKinsey & Co. in Paris before joining LVMH. She is the executive vice president at Louis Vuitton. In 2019, at 43, she became the youngest member of LVMH's executive committee. She married Italian wine heir Alessandro Vallarino Gancia in 2005 in what was called France's wedding of the year. They divorced in 2010. Now, she lives with tech billionaire Xavier Niel and has a daughter.

Antoine is chief executive of the menswear label Berluti and chairman of cashmere label Loro Piana, both part of the LVMH empire. He is also the head of communications and image for LVMH. He is married to supermodel Natalia Vodianova, who he met on a 2008 shoot for a Louis Vuitton campaign. The couple lives in Paris with their two kids and Natalia's three kids from a previous marriage.

Alexandre is the CEO of LVMH owned German luggage brand Rimowa. The company brings in more than $455 million in revenue annually. He travels between Cologne, Germany where Rimowa is made, London, Paris, and Los Angeles, where Rimowa has a store.

Frederic is the strategy and digital director at TAG Heuer, LVMH's biggest watch brand. He graduated from Ecole Polytechnique. He interned at Facebook and, like his half-sister, McKiney before joining LVMH's TAG Heuer in 2017.

Jean, Arnault's youngest son, is the only one of his children who doesn't work at LVMH. At least not yet. Considering he is the youngest of his parents three children and they got married in 1991, at the most he is 26-years-old. He is likely younger than that.

In addition to his Paris residence and vacation home in Saint-Tropez, Arnault has spent nearly $97 million on residential properties in Los Angeles's Beverly Hills, Trousdale Estates, and Hollywood Hills neighborhoods.

His wealth is growing at an astonishing rate. In January, he made $4.3 billion in one day after shares of LVMH surged 6.9%. In June, he became the third person in the world to have a net worth of at least $100 billion. Unlike Jeff Bezos and Bill Gates, however, Arnault is not in the technology industry.