Bashar al-Assad Net Worth: How Rich Is The Syrian Dictator?

Syria and its dictator Bashar al-Assad have been a problem for quite some time. It has been a six-year revolt by the Syrian people against the regime running their country. It has been bloody and violent and awful. Al-Assad is a human rights disaster and it finally seems that the whole world is waking up to the horror of the civil war in Syria. Let's look at Bashar al-Assad's life, rise to power, and the curious reason he might be the way he is now.

Bashar al-Assad was born on September 11, 1965. He is the second son of former Syrian President Hafez al-Assad. Hafaz rose to power via a coup in 1970. He integrated the military into his political regime and ruled Syria with an iron fist for three decades. Bashar grew up quiet and reserved. His older brother, Bassel, was the outgoing one. Bashar wanted to be an ophthalmologist. He studied medicine at the University of Damascus and did his residency at the Tishreen military hospital. In 1992 he moved to England to study at Western Eye Hospital.

Bashar was a happy to be a  medical student because it was what he wanted to do with his life. Hafez was grooming Bassel to succeed him as president of Syria. Then, in 1994, Bassel was killed in a car accident and Hafez began schooling Bashar in the ways of a Syrian dictator. He was sent to a military academy and pushed through the ranks rapidly. After just five years, he was a colonel.

On June 10, 2000 Bashar's life trajectory changed forever. His father, Hafez al-Assad, died. There was only one problem though, in Syria at the time, you had to be 40 to run for president and Bashar was just 34. The Syrian government quickly organized to change that law and ten days after his father's death, Bashar was appointed president of Syria. He received 97% of the vote which isn't as astounding as it sounds because he ran unopposed. That's what usually happens in regimes. 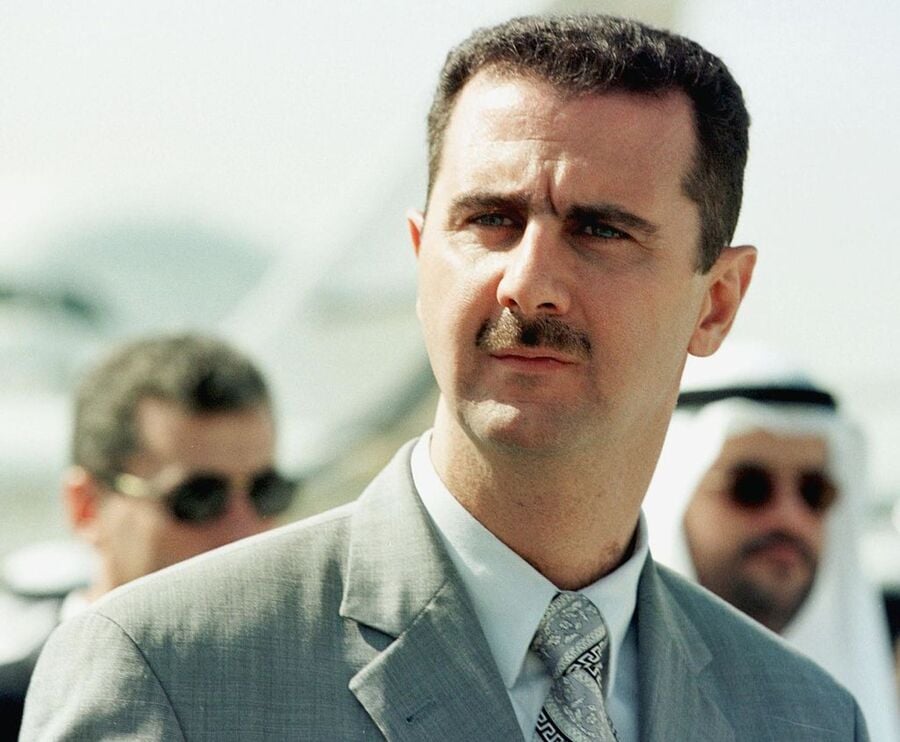 Bashar was largely considered to be a younger, more progressive Arab leader. There were high hopes that he would bring change to Syria. He was well-educated and the Syrian population hoped that he would be able to change his father's brutal regime and bring Syria into a more modern era. At first, he seemed to be on board with this plan; after all, he was educated in the west. He loved Phil Collins' music, married a British born woman who had worked on Wall Street, he was a modern man. He even said, early in his regime, that democracy was "a tool to a better life." He promised to rid the government of corruption and wanted to move Syria into the 21st century with computers, internet and cell phones.

Syria's economy was in awful shape when Bashar ascended to power. The collapse of the Soviet Union ended decades of financial support. The country had spiraled into a serious recession by the mid-1990s. However, by 2001, Syria looked more like a modern country. Cell phones, satellite TV, internet cafes, and trendy restaurants were popping up everywhere.

It was just a smokescreen however. Most of his promised reforms never happened. He was unable to weed out the corruption in the government. He simply wasn't strong enough, dynamic enough, or experienced enough to move Syria into the 21st century. He was trained to be an ophthalmologist, not a dictator.

Bashar wasn't faring any better in international affairs. His relationship with Israel was volatile,  Syria had military troops occupying Lebanon. and there were tensions with Turkey. He continued to provide support to the Hamas, Hezbollah, and Islamic Jihad­– his father's favorite militant groups.

Then, Syria was accused of being involved in the assassination of the former Lebanese premier, Rafik Hariri. This led to a public uprising in Lebanon and pressure from around the world to remove all troops from that country. Since then, Syria's relations with the West and most Arab states have soured. Syria's only ally in the Middle East is Iran.

From a human rights perspective, despite Bashar's vastly different personality and nature, nothing has changed from his father's regime. He has suppressed internal dissension and, since 2006, has expanded travel bans against dissidents. In 2007, a law requiring all comments on internet chat boards to be posted publicly was passed. In 2008 and 2011, YouTube and Facebook were blocked in Syria. There are reports that political opponents of Bashar al-Assad are routinely imprisoned, tortured, and murdered.

And then the proverbial sh*t hit the fan. Egypt, Libya, and Tunisia had successful regime changes and the Syrian people noticed. On January 26, 2011 protests began in Syria. The Syrian people were demanding political reform, a reinstatement of their civil rights, and an end to the state of emergency in the country, which had been in effect since 1963. The people were pissed, they were sick of the government promising big things and not delivering and the protests got bigger. In May 2011, the Syrian military responded with violent crackdowns on protests. In June Bashar again promised change. Change didn't happen. The protests continued.

By the fall of 2011, several countries were clamoring for the resignation of Bashar al-Assad. The Arab league suspended Syria, in January 2012, Reuters reported that the Syrian military had killed more than 5,000 civilians and another 1,000 had been killed by anti-regime forces. The United Nations stepped in that March with a peace plan but Syria ignored it.

By June 2012 the protests and the government's response had escalated into a full-scale civil war. There were daily reports of civilians being killed by the government. The al-Assad regime claimed the killings weren't on them.

Then, in August 2013, al-Assad was lambasted by world leaders for using chemical weapons against Syrian civilians. Al-Assad had a friend who stepped in and helped Syria avoid intervention from powerful western forces. That friend was Russian president Vladimir Putin. Putin agreed to remove Syria's stockpile of chemical weapons which placated the other foreign leaders.

Bashar al-Assad was reelected president in 2014. In September 2015, Russia once again got involved. Putin sent military support to al-Assad's regime. By February 2016, it was estimated that 470,000 Syrian people had been killed. Tens of thousands of others were fleeing the country, which set off a worldwide refugee crisis.

Just last week, al-Assad doused his citizens with another round of chemical warfare. In response, president Donald Trump launched airstrikes on a Syrian airbase. This thoroughly angered al-Assad and his allies in Russia and Iran. It is a tinderbox of potential danger.

But Bashar al-Assad has $1.5 billion reasons to stay his course. In fact, he may have more than $100 billion reasons. The family fortune is stashed all over the world. We'll cover that in a follow up piece.