Asia's Richest Man, Mukesh Ambani, Is Grooming His Heirs To Take Over – And Modernize – His Empire

Mukesh Ambani is the richest man in India and the richest man in Asia. Two family events over the past year also highlighted his family's involvement in high society in India. Two of Mumbai's most glamourous events were Ambani family weddings. In December, his daughter, 27-year-old Isha had a Bollywood-style extravaganza wedding featuring a performance by Beyoncé and celebrity guests including Hillary Clinton. In March, his twin brother Akash's wedding was attended by Google CEO Sundar Pichai. The two events thrust Ambani's children into the public spotlight just as they take on more visible roles at Reliance Industries' retail and telecom businesses.

Ambani, 62, is bringing his children into his empire to help modernize it. It also shows that he is grooming his twins to one day take over the family business. Hopefully, the transition of the company to Isha and Akash will be less drama filled than it was when Mukesh's father died without a will and he and his younger brother Anil warred over control of the company. Their mother ended up dividing the company in two and ending the feud. 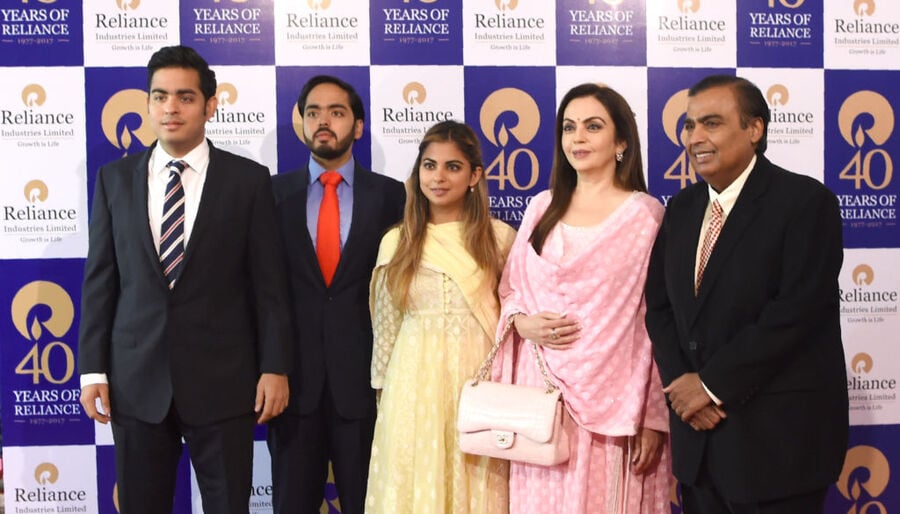 In 2014, the twins were appointed to the boards of mobile telecom unit Reliance Jio Infocomm Ltd. and Reliance Retail Ventures, Ltd. The twins have addressed investors at annual shareholder meetings and have introduced new products. They also brought an open office culture to the executive wing at Reliance's corporate office park. At the annual meeting on August 12, the twins introduced applications such as virtual reality and conference calls that come with a new high speed data network the company is rolling out soon.

Isha Ambani is a graduate of Yale University. Before joining her father's company, she was a consultant at McKinsey & Co. In 2016, she started Reliance's fashion e-commerce unit by starting the online shopping portal Ajio. Her husband is Anand Piramal, the son of billionaire Ajay Piramal who made his fortune in a range of interests from real estate to pharmaceuticals. Isha and her husband attended the 2019 Met Gala in New York City.

Akash Ambani is a graduate of Brown University, where he studied economics. His wife, Shloka Mehta, is his childhood sweetheart and the daughter of a Mumbai based jeweler and diamond trader. The twins also have a 24-year-old brother named Anant.

Mukesh Ambani's children are taking on bigger roles at the company just as Reliance is moving away from the core energy business and moving toward consumer offerings. Ambani's Jio mobile carrier debuted in 2016 and has upended the telecommunications industry in India with free calls and cheap data. Ambani is trying to use Jio and its retail units to tap into India's online shopping market. Morgan Stanley estimates that will surge six fold to $200 billion within a decade. For what it's worth, Mukesh has credited his kids with nudging him into the internet business.

In 2011, when Isha was on a break from college at Yale, she complained about the slow internet at the Ambani family home. Akash kept reminding his dad that digital communications – not just phones – were driving the world.

Mukesh Ambani has a net worth of $50 billion. Mukesh and his family live in a 27-story mansion right in the heart of Mumbai that is the most expensive private home in the world. The roof has landing space for three helicopters and six floors are reserved exclusively for 168 parking spaces. The house has a 50-seat movie theater, yoga studio, health club, spa and ballroom. Even though only six people live in the house, the building is staffed by more than 600 full-time employees. To build the property, an orphanage was demolished. The 48,000 square foot building is estimated to have cost between $1 and $2 billion.

Mukesh Ambani believes that in the near future, his countrymen can banish the abject poverty that plagues India today and remove the entrenched caste system. And he and his kids are doing everything to help push that vision forward.