By Brian Warner on March 1, 2022 in Articles › Billionaire News

As first spotted by CNBC, in the last 24 hours several sanction-sensitive Russian oligarchs may have begun the process of moving their yachts out of European and other unfriendly ports. CNBC compiled their data using a service called Marine Traffic. Marine Traffic reportedly spotted a handful of so-called "superyachts," believed to be owned by Russian oligarchs, leaving or getting ready to leave.

The rush to get the vessels out of European waters could be happening in advance of the United States and European Union potentially expanding economic sanctions to include roughly two dozen businessmen who are believed to be allies of Russian President Vladimir Putin and/or beneficiaries of longstanding Russian corruption. If sanctions were to drop, any physical assets sitting in Europe or the US could theoretically be seized. And what's a Russian billionaire oligarch without his $500 million superyacht?

Below is a sampling of oligarchs who are believed to own superyachts that are either currently docked yachts in European waters or just left European waters:

When Friday's markets closed, Vagit Alekperov was 10th richest Russian person in the world with a net worth that stood at $15 billion. That's down $8 billion, from $23 billion,  since January 1st. Vagit is the president of Russian energy conglomerate Lukoil. Lukoil's stock price plunged nearly 50% on Monday. So Vagit's Friday net worth of $15 billion is likely now down around $7 billion if the current lows hold.

Vagit's yacht, which is called "Galactica Super Nova," features has a helipad and a glass-bottomed swimming pool. It was built in 2016 and is worth around $80 million. According to CNBC and Marine Traffic, Galactica Super Nova recently departed Barcelona and is currently in open waters. Its purported destination is Montenegro but that may change since Montenegro, which is looking to join the European Union, is apparently joining the EU sanctioning Russia. Montenegro has not yet announced its intention to sanction additional oligarchs like Vagit, but that may happen any minute.

Before the global recession of 2008, Oleg Deripaska was the richest Russian in the world with a net worth that topped $28 billion at its peak. Unfortunately, Oleg lost a substantial amount of personal wealth in the wake of that crash thanks to a high debt load. Today Oleg derives the majority of his $4 billion fortune thanks to the aluminum company Rusal. Oleg, who was sanctioned by the United States in 2018, is actually one of the few oligarchs who has publicly opposed the war in Ukraine. Over the weekend he Tweeted "Peace is the priority. Negotiations must start ASAP."

Oleg's yacht Clio is reportedly en route to the Maldives.

Roman Abramovich owns at least two superyacts. Roman's 139-foot "Solaris" was also docked in Barcelona as recently as this weekend.

Roman's OTHER yacht, the $500 million Eclipse, was most-recently spotted in the Caribbean at a port in Saint Martin. Saint Martin is jointly governed by France and the Netherlands.

Here is the Eclipse photographed in 2013 as it sailed into the French Riviera: 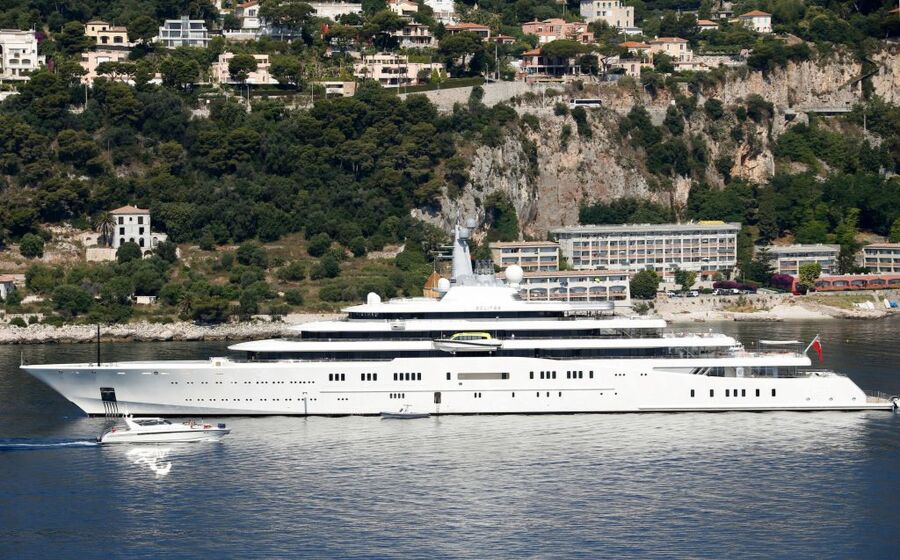 As of Friday, Roman's net worth had dropped from $18 to $14 billion since the beginning of the year. On Saturday he shocked the European sports world with the announcement that he was donating his ownership stake in the $2 billion English soccer team Chelsea to a charitable trust. Roman was also apparently present in Belarus on Monday during the peace talks between a delegate of Russian and Ukrainian ministers.