By Joseph Gibson on February 27, 2017 in Articles › Billionaire News

It seems like every few months, Russian billionaire Andrey Melnichenko's Sailing Yacht A is in the headlines due to some milestone in its now-lengthy development from idea to record-breaking reality. Now, one of the biggest sailing yacht in the world is making new headlines for a reason that's certainly a lot more annoying to Melnichenko: According to The Guardian, the vessel has been impounded by the Gibraltar Port Authority for as it was on its way to being delivered to its owner.

The dispute at the heart of this action is between Melnichenko and Nobiskrug, the company that built the super yacht. They're seeking over $16.1 million from Melnichenko, stemming from disputed costs in arbitration that come to about $10 million, plus almost $6 million in interest charges and wages to various subcontractors employed throughout the project. On its website, the Gibraltar Port Authority has this to say about the action:

"In the volatile world of shipping, particularly in the recent economic downturn, disputes and defaults are an unfortunate fact of life. [Ship arrest] isn't an attractive proposition, and clearly it's an action of last resort but, when handled efficiently and swiftly, it can at least deliver a safe resolution to a dispute and bring matters to a close."

A spokesman for Melnichenko takes a different view on the development, saying that it represents "an astounding act for a shipbuilder of Nobiskrug's standing" and unnecessary given the circumstances:

"We assumed the matter was progressing to a resolution as Nobiskrug were happy to release the yacht on 5 February to the owner's project team for further works to be carried out in Spain. The money was paid by the owner the following day into an escrow account pending a resolution of the discussions. All monies now being claimed are in arbitration and we understand these disputes fall under arbitration in the UK courts." 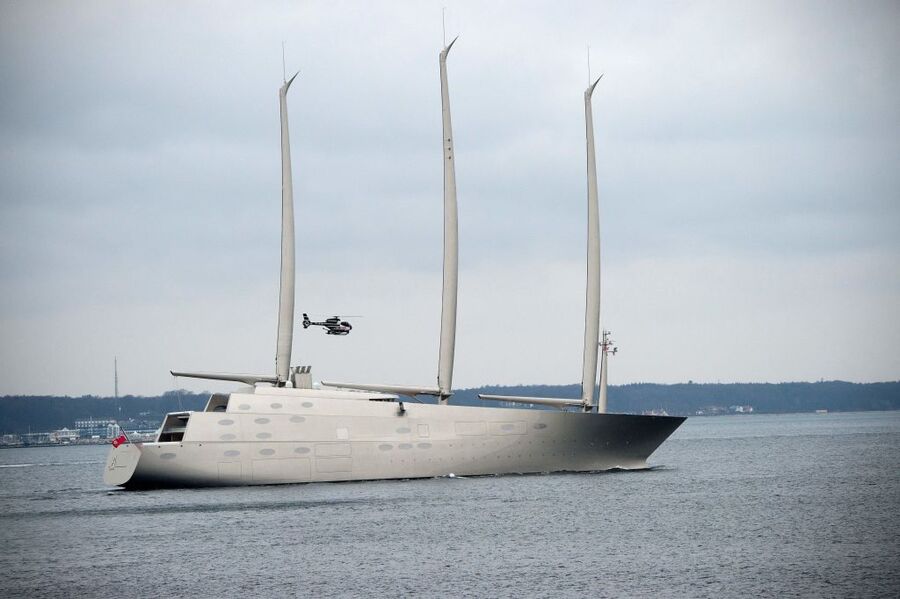 Assuming this gets cleared up in a timely fashion, Melnichenko will finally have the sailing yacht of his dreams in his possession, a massive 470-foot long behemoth equipped with a helipad, swimming pool, underwater observation pod, and much, much more – too much to let a measly $16 million stand in his way, especially given the project's overall estimated cost of $400 million and Melnichenko's own personal fortune of almost $9 billion.

UPDATE: As it turns out, Sailing Yacht A was only impounded for about three days, as reported by Boat International. Here's a statement from a spokesman for the yacht that puts a bow on the whole affair:

"This unfortunate incident is now resolved. The yacht will now be handed over to the owner's project team and will leave Gibraltar shortly."