Amazon Just Closed At An All Time High – What Would Jeff Bezos' Net Worth Be Today Had He Never Divorced?

By Brian Warner on July 6, 2020 in Articles › Billionaire News

Shares of Amazon closed today at an all-time high of $3,057.04. That's up 5.77% over Friday's close. It's the first time the stock breached the $3,000 price mark. The company's market cap topped $1.5 TRILLION for the first time ever. The only two companies with larger market caps are fellow tech rivals Apple and Microsoft, who each sport a market cap of $1.6 trillion. Today Google, Amazon, Apple, Microsoft and Facebook are now worth a combined $6.4 trillion. Truly stunning numbers. But you know what might be the most stunning number of all? Jeff Bezos' net worth. As owner of roughly 58 million shares of Amazon, no one is feeling today's highs more than Jeffrey Preston Bezos.

As we just mentioned, Jeff owns 58 million shares of Amazon, roughly 12% of the company's total shares outstanding. When you multiply 58 million by $3,057.04 you arrive at $177 billion. When combined with his other assets, for example a $1 billion early-stake in Google, and around $400 million worth of real estate, you arrive at Jeff's current net worth of:

It's almost difficult to even fathom. It's especially unfathomable when you realize that exactly five years ago Jeff was worth "only" $50 billion. Here's a chart of Amazon's stock price over the last 5 years showing a run from $443 on July 10, 2015 to over $3000 today: 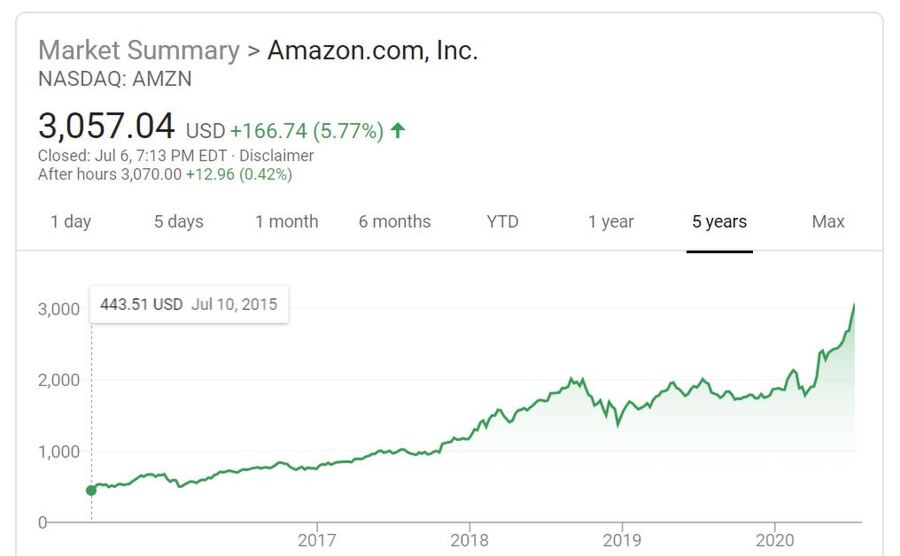 Is Jeff Bezos The Richest Person Of All Time?

No. When you take into account inflation, Jeff Bezos is not yet the richest person in history. But he did just jump up from #12 to #11 and is only $3 billion away from taking the #10 spot from Cornelius Vanderbilt (Anderson Cooper's great-great-great-grandfather). 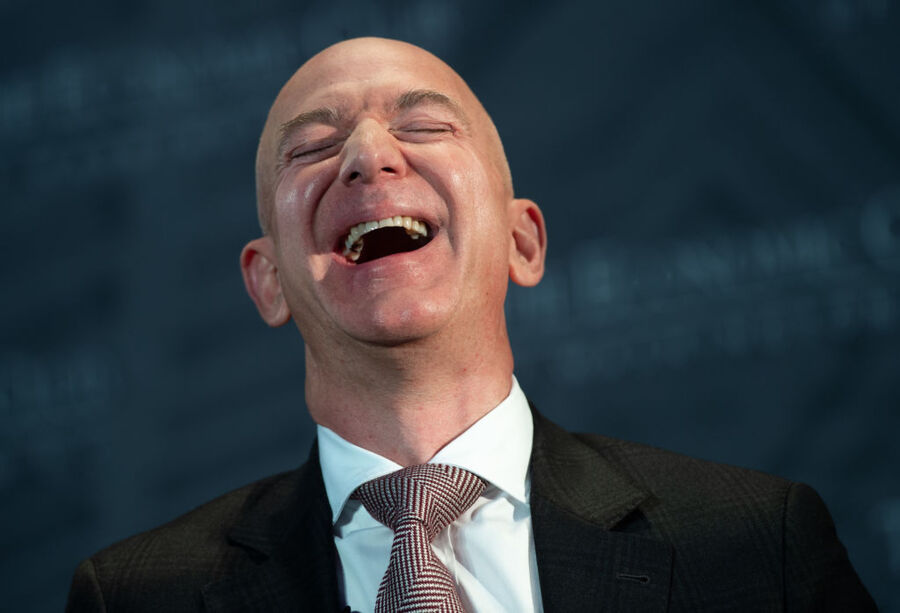 What If He Had Never Divorced?

At his peak, Jeff owned 80 million shares of Amazon. Before he and ex-wife MacKenzie Bezos announced their divorce, Jeff's net worth was $150 billion. Their settlement terms, reached in April 2019, called for Jeff to give MacKenzie 19.7 million shares. The value of those shares at the time of transfer was $36 billion. So immediately after their settlement, Jeff's net worth was reduced from $150 billion to $114 billion. MacKenzie instantly became one of the richest women in the world.

As you can see from the stock price chart above, Amazon shares  continued their upward march for the remainder of 2019 and all of 2020 so far. Hence Jeff today being worth $182 billion.

MacKenzie's stake has soared from $36 billion to an all-time high today of $60 billion.

So, had they never divorced, today Jeff Bezos would be sitting on net worth of:

Now that is truly an unimaginable number. That amount would have put Jeff in the top 5 richest people of all time.