By Amy Lamare on November 4, 2020 in Articles › Billionaire News

Lucy Peng is the highest-powered woman at e-commerce giant Alibaba and with good reason – she's the co-founder. Over the past 20 years, she's played a pivotal role in steering the company she founded with Jack Ma. The 47-year old set up Alibaba's HR department was Ant Group's CEO, and now she's the executive chairman of the Asian e-commerce platform Lazada Group. Lucy Peng has been dubbed Alibaba Group Holding Ltd.'s most influential woman, yet she's not all that known outside of China.

[***UPDATE*** The day after we completed this article, Chinese financial regulators announced they were suspending Ant Group's IPO. The Shanghai Stock Exchange announced it was suspending the IPO due to "major issues" that might cause the company "to not meet listing conditions of disclosure requirements. The announcement came one week after Jack Ma publicly criticized Chinese regulators for stifling innovation by being too afraid of risk. Ant is now expected to delay its IPO and lower the value after Jack does whatever he needs to do behind the scenes and maybe even publicly to get back in the good graces of the Chinese powers that be…]

Peng is a former finance teacher. She's also one of the richest people at Alibaba and one of at least seven women poised to make billions off the Ant Group IPO. Peng has a 1.7% stake in Ant, which would give her a net worth of around $5 billion with the fintech company's IPO goal of $34.5 billion.

Jack Ma is well known for how much he considers women in his company as keys to his success and Peng is the most important woman in his empire.  About 40% of Alibaba Partnership members are women. Alibaba Partnership is the elite group that determines management's annual cash bonuses. 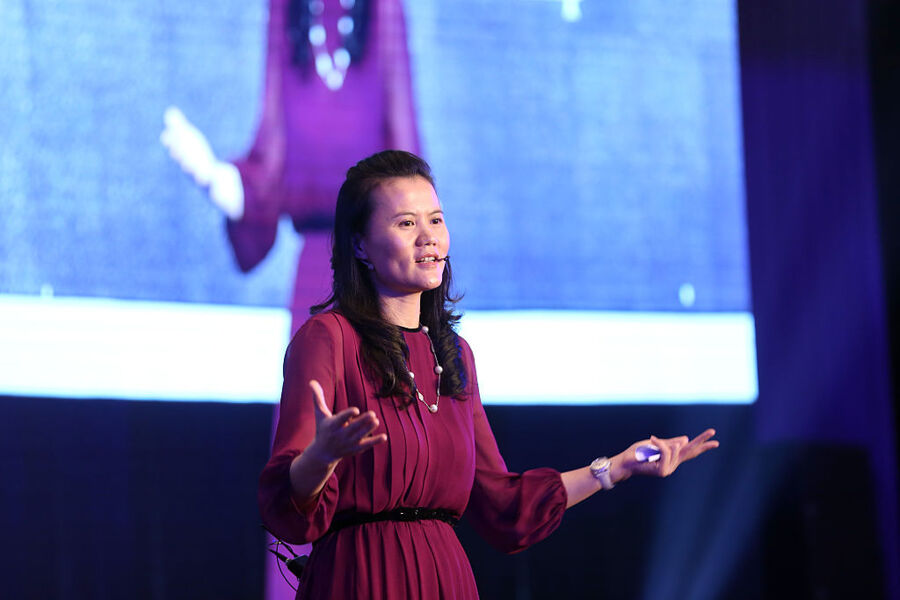 Photo by VCG/VCG via Getty Images

Peng is one of seven women who hold billion-dollar-plus stakes in Ant. Combined, their shares are worth $14.5 billion.

Peng met Jack Ma through her husband when they worked together at China Pages, a directory of Chinese companies looking for customers abroad that Ma had founded before Alibaba. Peng was born in southwestern China and has a bachelor's degree in business administration from Gongshang University. She taught finance at the college level for five years before joining Ma at Alibaba. She was the chief people officer at Alibaba until 2010 when she took the role of CEO at Alipay, the platform owned by Ant. Alibaba spun Ant off into its own entity in 2011 and it took off. Ant has more than one billion users globally and the company's valuation has grown eightfold over the past five years.

Ant is about to have the largest IPO in history which will make at least 17 other people billionaires. Peng owns the second-largest stake in Ant after Ma. Peng stepped down as chairman of Ant in 2018. She is currently the chairwoman of Lazada, the e-commerce company Alibaba bought in 2016 for $1 billion.

China has been a particularly big contributor to the number of self-made female billionaires recently. Of the 500 richest people in the world, two-thirds of the 15 self-made women are Chinese.