A Saudi Billionaire Is About To List His NYC Penthouse For… $170 Million!

A year ago, the headlines about New York City real estate were dire. A Wall Street Journal article from back then was titled "Covid-19 Pounds New York Real Estate Worse Than 9/11 and the Financial Crisis." A stat from that article claimed that between March and August 2020, real estate sales were off by 56%. And that was for real estate overall. Sales for properties priced over $4 million were down 70%!

Fast forward to the present and…

NEW YORK IS BACK, BABY!

Manhattan condos are basically flying off the shelves today. Even in the luxury price point. Apparently for the last 20 weeks straight, at least 30 contracts were signed for properties over $4 million.

And then there's today's news.

According to sources who spoke with the Wall Street Journal, a Saudi billionaire is about to hoist his penthouse at 432 Park Avenue onto the market for…

If successful, the $20,500 price per square foot would SHATTER the city's record. That record currently stands at $13,049, which was achieved in February 2012 when someone paid $88 million for a 6,744 square-foot apartment at 15 Central Park West. That someone was later revealed to be A 22-YEAR-OLD woman.

To be fair, that 22-year-old was Ekaterina Rybolovleva, the daughter of Russian billionaire Dmitry Rybolovlev whose $7 billion net worth also allows him to own the AS Monaco soccer team.

If successful, this will NOT be the most-expensive NYC real estate deal. That honor belongs to hedge fund manager Ken Griffin who paid $240 million for four-apartments at 220 Central Park South that ultimately combined into one 23,000 square-foot unit.

I digress. Back to today's $170 million listing, which would be the highest-penthouse offered in this building: 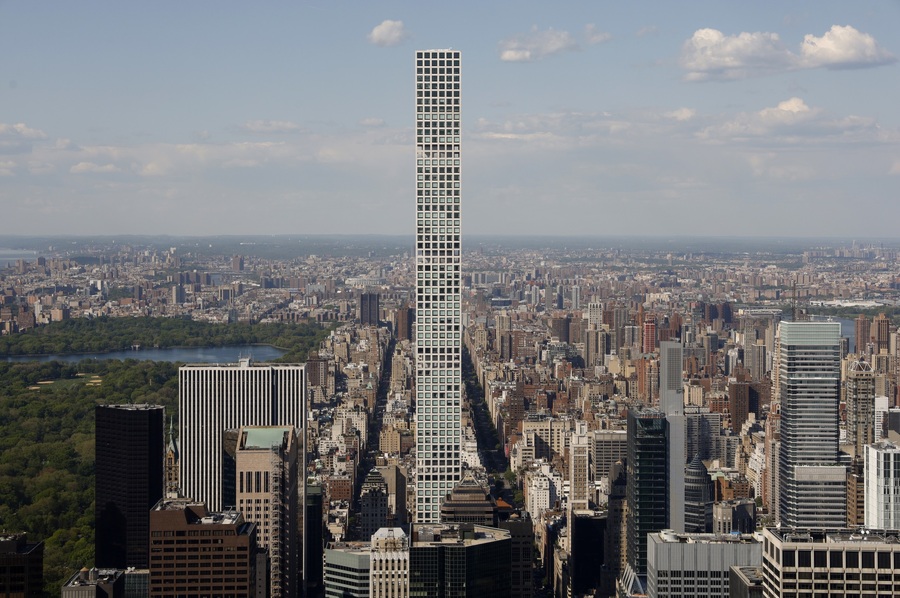 Who Is The Seller?

According to the Wall Street Journal, the seller is Saudi real estate billionaire Fawaz Al Hokair.

According to Celebrity Net Worth, Fawaz bought the 96th-floor penthouse in 2016 for $87.7 million. That was enough to rank as fifth most-expensive real estate transaction of 2016. Real estate records show that Fawaz took out a $56 million mortgage to buy the property. Assuming an interest rat of 4.5%, that means Fawaz is paying around $300,000 per month just on his mortgage. That's before property taxes, HOA and insurance costs.

If Fawaz is successful in getting $170 million, he will have just about doubled his money.

I couldn't find a video of Fawaz's penthouse, but I DID find a video tour of a penthouse a few floors down. What you are about to see is a three-bedroom 4,000 square-foot penthouse. So, as you watch, imagine this TIMES TWO:

Did you scope that master bathtub at 2:05? Jeeeesh.

Fun fact: This is the same building where someone sitting in a neighboring lower-floor building snapped a photo of Alex taking a #2 next to his monogrammed towels. I won't be sharing that photo because Alex promptly sued every outlet that posted it.

Fortunately, the 96th-floor penthouse is high enough in the sky that snooping creeps will not be able to capture any private moments.

When not enjoying the privacy of their bathrooms, residents of 432 Park Ave have access to a private restaurant, outdoor terrace, spa, gym and a 75-foot-pool.

Unfortunately it's not all swimming pools and spa treatments at 435 Park Avenue, though. According to a February 2021 New York Times exposé, residents have long-complained that the building has several major flaws. For example, the elevators stop working when wind is very strong in the city. Walls are apparently cracking. And some units have experienced horrifically expensive flooding.

That's a lot to put up with for the price.

Who is Fawaz Al Hokair?

Back in 1989, Fawaz and his two brothers launched a retail business called the Fawaz Abdulaziz Alhokair Group. They launched with two menswear stores.

Today the company owns 19 shopping malls in Saudi Arabia. Not only that, they're able to fill their malls with a number of brands, to which they own the exclusive Saudi franchise rights. Those brands include:

Fawaz primarily lives in Saudi Arabia but he does have another property in the United States.

Do you recall reading about a spec mansion in Bel Air, Los Angeles dubbed "The Billionaire"?

When "The Billionaire" hit the market in 2018, it's list price of $250 million made it the most-expensive home for sale in the US.

Here's a video tour of "The Billionaire":

He continues to own this property today.

Apparently he rarely visits but always keeps the driveway filled with SUVs and bodyguards. As you would expect of any self-respecting Saudi billionaire!