By Amy Lamare on February 15, 2016 in Articles › Billionaire News

Today, Donald Trump is a real estate magnate, reality TV host, and Republican presidential candidate, but back in the 1980s, Trump was a businessman in his 30s who took on the NFL in a high-stakes antitrust case. In doing so, he showcased the brash confidence that has become the trademark of his presidential campaign. This is how it went down…

The USFL was founded with the following tenet set in stone: avoid fights with the NFL. Like any upstart league, it differentiated itself by being more entertaining. The league had a free-wheeling, outlaw attitude about it and a handful of marquee players, including Heisman Trophy winner Herschel Walker of the New Jersey Generals. Jim Kelly, Reggie White, Steve Young, and Doug Flutie also spent time in the USFL. The league got off to a promising start in 1983, however, by its second season, the public's enthusiasm for spring football had waned a bit and some of the league's biggest franchises were struggling.

At the time, Trump wasn't widely known to people who cared about football instead of (or more than) New York real estate development deals. But when the tryouts for the Generals' cheerleading squad garnered big media attention, things changed for Trump. During the first six months of his ownership of the Generals, his name appeared in the newspaper 161 times. That was more than it had appeared in the four previous years combined. 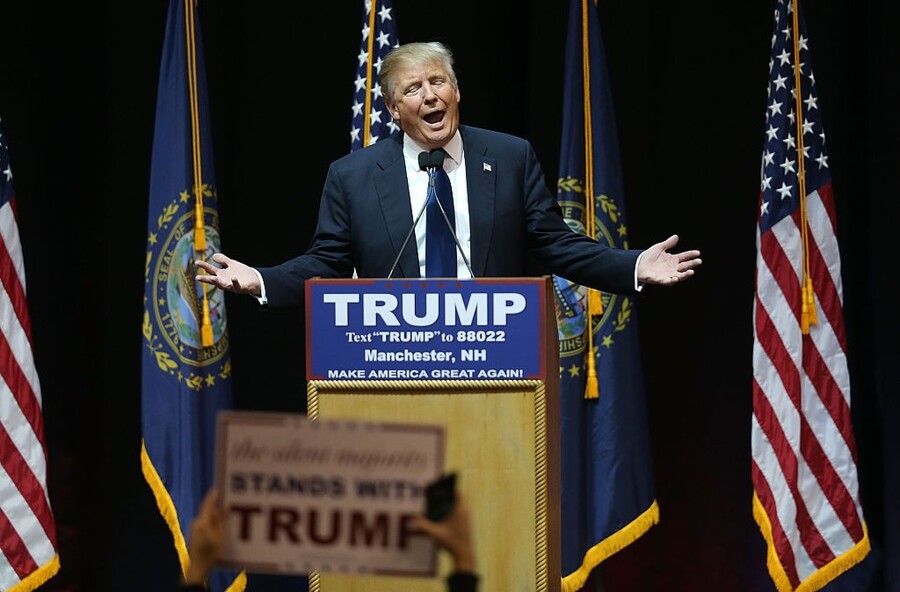 The USFL blew through a lot of money in its first two seasons. The league expanded at a rate that wasn't sustainable, given its smaller audience. Owners overspent on players in a quest to lure NFL-caliber talent to the upstart league. However, prior to Trump's involvement, the league was able to maintain its central premise: steer clear of the NFL.

Trump, however, had no intention of adhering to that rule, or being a part of a lesser football league. He frequently courted the attention of the NFL by poaching players lke linebacker Lawrence Taylor. When Taylor's contract with the New York Giants was in dispute, Trump wired $1 million into the football star's bank account and signed him to a contract with the Generals. To get Taylor back, the Giants had to pay Trump back that $1 million. In doing so, Trump made an enemy of the NFL for life.

Trump pushed and pushed and pushed the USFL owners to sue the NFL on antitrust charges. He insisted that the very existence of the NFL was causing the USFL to bleed money and that owners should be able to profit from that. The owners caved to Trump's full frontal assault—the league would move forward on a lawsuit against the NFL. But it also caved to Trump on one more issue: Spring vs. Fall scheduling.

The entire success of the USFL as a viable alternative to the NFL was based on the fact that it wasn't competing directly against the NFL. The USFL played in the spring. The NFL plays in the fall. However, Donald Trump did not want to play spring football. Unable to secure an NFL franchise of his own, Trump bought the Generals with every intent of turning them into an NFL franchise. He began harassing the other USFL owners on the subject of moving the league's schedule to fall to compete head to head with the NFL.

In order to compete with the NFL, the USFL needed comparable talent. Trump embarked on an insane spending spree, securing a group of talented players (including Doug Flutie) for the Generals. His spree followed no reasonable financial model and it bankrupted a slew of other USFL teams who had to spend money they didn't have to keep up and compete.

But this wasn't even the worst thing Trump did to the USFL.

Trump bullied the other USFL owners into ignoring the modest but guaranteed TV contracts they'd been offered in favor of an insane plan. Trump argued that the league could make way more money if they moved their games to the fall and challenged the NFL. This would eventually, he argued, force a merger of the two leagues.

In order to push this agenda, he proposed suing the NFL in an antitrust case. The USFL was hanging its hopes (and very existence) on one thing: damages in antitrust cases are tripled, so the USFL could receive a massive financial settlement if they could prove to a jury that the NFL was an unfair monopoly. Make no mistake, all that Trump was after was that potential financial windfall. The USFL was not on his mind, his bank account was. Trump recklessly led the other USFL owners to the slaughter that was basing the fate of the league on a court decision. He willfully put thousands of people's jobs at risk.

The case went to trial in the spring of 1986 and lasted for 42 days. On July 29, 1986, a six-person jury handed down a verdict that devastated the USFL, even though the league technically had won the case. They found that the NFL was a "duly adjudicated illegal monopoly" and that the NFL had willfully acquired and maintained this monopoly through predatory practices. Good, right? Wrong. They awarded the USFL $1 in damages, which became $3 due to the tripling of antitrust settlements.

The USFL by this time was $160 million in debt and many of their players had signed contracts with the NFL and Canadian Football League after the 1985 season.

Why did it come to this? Two words: Donald Trump. Trump had made an enemy of the NFL with his smart mouth, play for Lawrence Taylor, and determination to challenge the NFL. So the NFL set out to teach him a lesson. The NFL didn't see the antitrust case as a USFL thing, they saw it as a Trump thing. They saw it as Trump grabbing for more money. And quite simply, Trump didn't need the money, so the settlement reflected that.

The court came to its decision by rationalizing that Trump and the USFL had made the choice to go head-to-head with the NFL in the fall. Since they turned away from their model of playing in the spring, the USFL had no ground to seek damages.

The USFL might not have survived anyway, but Trump and the lawsuit certainly hastened its demise. His push to abandon the spring format ran the USFL into the ground. The USFL never played another down after the court ruling. Trump moved on immediately.

Many former USFL team owners have gone on the record expressing their regret over allowing Trump to steamroll them into supporting his attempt to take on the NFL. Trump didn't care if he wrecked the league with the lawsuit. He had a point to prove and by God, he was going to prove it by any means necessary.

The USFL finally received a settlement check for $3.76 in 1990. The additional 76 cents was interest earned on the settlement while litigation continued. That check has never been cashed.

Thirty years after the collapse of the USFL, those who were there are worried that Trump's run at the U.S. presidency as a replay of his USFL days. In this case, the United States would be Trump's USFL franchise. Only time will tell!