2019 was a banner year for super high-end real estate. Six homes sold for $100 million or more in that year alone. Los Angeles became the hot spot for high-end real estate with a number of the priciest homes sold residing within L.A. County. New York and Palm Beach have the next highest number of nine-figure real estate deals. In fact, the boom in high priced mansions in Palm Beach in 2019 prompted questions about how many wealthy New Yorkers are fleeing to Florida in response to the 2017 change in federal tax law. As usual, hedge funder Ken Griffin makes the list. He's been on an unprecedented real estate buying binge over the past several years and clocks in with the most expensive property in the United States, a Manhattan penthouse which he spent $238 million on. Below are the homes that have sold for $100 million or more.

In January 2016, the Playboy Mansion was listed for $200 million. The Playboy Mansion has seven bedrooms, eight bathrooms, a wine cellar, home theater, gym, tennis court, and swimming pool. The buyer, Daren Metropoulos, is the co-owner of the snack company Hostess. Metropolous, a neighbor of Hefner, bought it with the intention of merging its five acres with his own home, restoring an original 7.3-acre property envisioned by the 1920s developer. 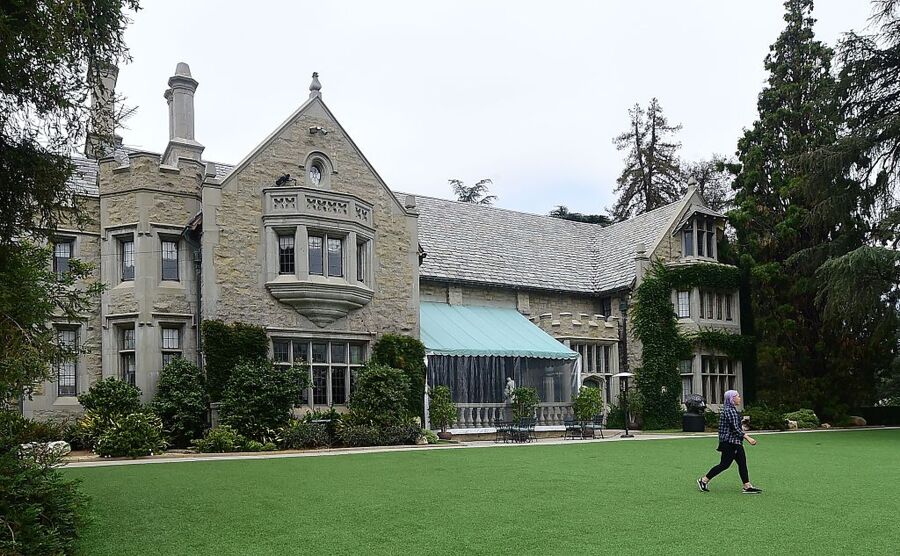 The mansion on La Paloma Road was built to look like an 18th century French Chateau. The home has indoor and outdoor pools, a ballroom, and a wine cellar.

Detroit Pistons owner Tom Gores bought the 38,000 square foot property that was once the estate of Barbra Streisand and sits across the street from Frank Sinatra's former home. The property consists of a lounge, theater complex, wine room, and separate valet entrance. Inside, there are 10 bedrooms, 20 full baths, and an entertainment pad. It has a 5,300 square foot master suite with a private covered patio. On the exterior, there's a fireside lounge, lap pool, multiple sports courts, and a hiking trail.

#12. A Charles Gwathmey House in Malibu

NBC Universal vice chairman Ron Meyer sold his Malibu beach pad to WhatsApp founder Jan Koum. The property was originally listed for $125 million. The house sits on more than three oceanfront acres and is about 14,000 square feet. There are six bedrooms, a two-story paneled library, a home theater, a gym and a home office. It was designed by the architect Charles Gwathmey for Meyer in the late 1990s.

The penthouse on the 89th and 90th floors of residential skyscraper One57 in midtown Manhattan sold in 2014 for $100,471,452. It is located in the part of Manhattan known as billionaire's row. The home is 11,000 square feet with six bedrooms. Until 2019, it was the most expensive home ever sold in New York City.

This Carbon Beach, Malibu beach house is located on what is referred to as Billionaire's beach. Designed by Richard Meier, the estate includes a main residence as well as a guest house.

This Palm Beach estate sold for $110.25 million after hitting the market some months earlier for $135 million. The home is located on Palm Beach's exclusive Billionaire's Row, a narrow stretch of South Ocean Boulevard just south of Mar-a-Lago. The 37,500 square foot home has 13 bedrooms and sits on nearly five acres.

Metro Networks founder David Saperstein put his 10,600 square foot Malibu home on the marked for $115 million. It was built in the late 1990s and sits on a 2.6 acre lot in Paradise Cove. Ann Walton lives next door. The property comes with private access to Paradise Cove beach, an infinity pool, and amazing views of the Pacific Ocean.

This nine-acre estate located at 360 Mountain Home Road was the most expensive residence ever sold in California from its sale in November 2012 until 2019, when three other Los Angeles area homes sold for more.

Formula One heiress Petra Ecclestone sold Spelling Manor, formerly the home of the late television producer Aaron Spelling and his family, for $119.75 million. The home is about 56,000 square feet, making it one of the largest private homes in the country. The property has a two-lane bowling alley, a wine cellar, a beauty salon, a gym, tanning rooms and a tennis court.

Rupert Murdoch's son Lachlan Murdoch, co-chairman of News Corp., bought Chartwell in Bel Air for $150 million, setting a record for the Los Angeles area, which was soon beaten by Jeff Bezos. The 25,000 square foot mansion hit the market in 2017 for $350 million. The property was owned by onetime Univision Chairman A. Jerrold Perenchio.

Ken Griffin paid $238 million for a 24,000 square foot penthouse apartment. This is just the latest high profile and high priced real estate purchase by the Citadel founder. In 2017, he bought several floors of a Chicago condominium for a record $58.75 million, a London home for about $122 million, and a piece of land in Florida for $99.1 million.