100 Years Ago, One Random Guy Owned 5% Of All Oil Found In Iraq… And YES He Died One Of The Richest People On The Planet

By Brian Warner on August 1, 2022 in Articles › Billionaire News

Nicknames can be a blessing or a curse.

For example, in the 1970s an Oakland A's batboy named Stanley Burrell earned the nickname "Hammer" thanks to his uncanny resemblance to Hammerin' Hank Aaron. Stanley still carried that nickname decades later when he became the world famous master of ceremonies, better known as M.C. Hammer.

Around the same time, over in Michigan a 15-year-old named Earvin was permanently stamped as "Magic" Johnson by a local sportswriter after scoring a triple-double with 36 points, 18 rebounds, and 16 assists in a high school basketball game.

These are good nicknames.

In terms of bad nicknames, we all probably know someone who – even as an adult with a wonderful life and respectable job – is called something like "Gassy Mike" thanks to ONE momentary embarrassing incident that happened in middle school. That would be a bad nickname.

In 1955 an oil engineer named Calouste Gulbenkian died at the age of 86 in Lisbon, Portugal. Every single obituary of Calouste referred to him by his nickname. That nickname was:

On the scale of good and bad nicknames, "Mr. Five Per Cent" was… extremely good. How good?

That nickname resulted in Calouste Gulbenkian being one of the richest people on the planet at the time he died, leaving behind a massive philanthropic foundation and one of the world's most-valuable private art collections…

This is the story of Calouste "Mr. Five Per Cent" Gulbenkian… 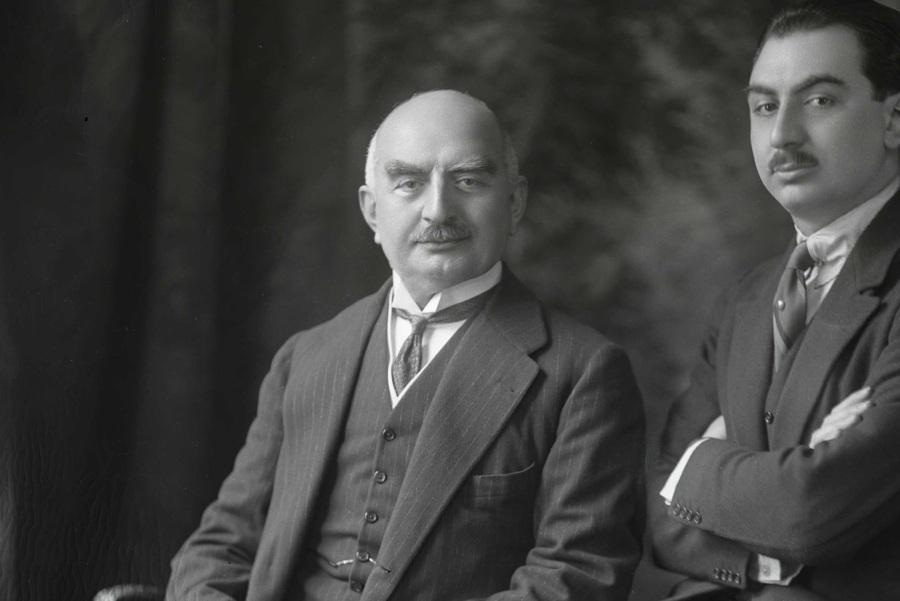 Calouste Gulbenkian (1867-1953) and his son. (Photo by: Photo12/Universal Images Group via Getty Images)

Falling in Love with Oil

Calouste Gulbenkian was born on March 23, 1869 in present-day Istanbul but what was then called Constantinople, the capital of the Ottoman Empire.

His father had made a small fortune in banking and oil so Calouste was raised with every advantage. For high school he was sent away to a private school in Marseilles, France. After high school he enrolled at the prestigious King's College London where he studied mining and engineering with the clear intent to dive into the oil business as soon as possible

He graduated in 1887 at the age of 18. At 19 his father shipped Calouste off again. This time to the city of Baku, in modern-day Azerbaijan. A half century prior to Calouste's arrival, the Russian Empire discovered a massive quantity of oil in Baku. Russia built a sprawling oil industry in Baku that transformed the country into a modern global empire while generating previously-unfathomable private fortunes for men like the Nobel brothers (one of whom would become famous later for inventing dynamite and funding the Nobel prize) and the Rothschild family. Calouste's own father earned his fortune in Baku, though not nearly at the scale of the Nobels or Rothschilds.

While living and working Baku, Calouste fell in love with the oil business. When he returned to France a few years later, he published his experiences as a series of magazine articles. In 1891 his articles and other writings on Baku and the oil business were published as a standalone book.

That book found its way to the desk of a Turkish Sultan. Impressed an excited to learn the author was Turkish by origin, the Sultan reached out to Calouste to see if he would be interested in searching for oil on behalf of the government. The Sultan was specifically interested in a desolate desert which at that time was under Turkish control. That area was called Mesopotamia. Also known as modern-day Syria and Iraq.

Amazingly, Calouste didn't even have to visit Mesopotamia to become convinced that there was oil to be found in the region. He collected dozens of research reports put together by previous assessors and, most importantly, he spoke to railroad engineers and conductors who had traversed the area for years. Those rail workers told tales of oil practically bursting out of the ground without provocation, forming little puddles across the desert.

Upon reading his report, the Turkish Sultan was convinced. Unfortunately, further exploration was put on hold as Ottoman Empire began to collapse, and Calouste was forced to flee to London where he pursued other opportunities for the next few years.

While living in London, Calouste was offered the chance to hunt for oil in Persia, also known as modern-day Iran. He declined because he thought it was too risky of a gamble. Much to his dismay, in short order Iran proved to contain one of the largest sources of oil on the planet. Learning from his mistake, Calouste vowed to never let an opportunity slip through his fingers again. In fact, for the rest of his life he kept a plaque behind his desk that read "Never give up on an oil concession."

In 1907, approaching 40 and still reeling from his missed fortune in Persia, Calouste approached two London business acquaintances about the possibility of setting up a concession in Mesopotamia. The acquaintances, the Samuel brothers, operated a company called the Shell Transport and Trading Company. Their company name was a reference to their father, Marcus Samuel, an immigrant Iraqi who literally sold seashell knickknacks from a cart around the London docks.

As oil became a larger portion of the brothers' transport and trading business, the company became better known as Shell Oil. After Gulbenkian arranged for the Samuel brothers to merge with a company called the Dutch Petroleum Company, he rewarded himself with a 5% stake in the newly formed, Royal Dutch Shell.

Acting as an advisor to the Turkish government and a director of the National Bank of Turkey, Calouste put together an organization whose sole purpose was to locate and extract oil from Mesopotamia. That organization would be called the Turkish Petroleum Company (TPC). At the outset in 1912, the equity ownership was awarded as:

You may have noticed Calouste got 15% in this deal. So why isn't he called "Mr 15 Per cent"?? Because this deal never actually came to fruition.

As World War 1 erupted around the world in 1914, the TPC was put on ice. And when WWI concluded, the members wanted Germany OUT of their consortium. The British and Dutch ALSO wanted to squeeze this random Armenian guy to take back an additional 15% cut, but Calouste Gulbenkian wasn't going down without a fight.

Calling in every connection and ounce of negotiating power her could muster, Calouste arranged for France to take over Germany's former 25% share of the TPC. And as a show of gratitude for his efforts, France rewarded Calouste with…

That was a 5% royalty on all revenue generated by oil found in what eventually became known as Iraq. Calouste Gulbenkian's 5% deal lasted for decades. It lasted several years beyond his death in 1955. Hundreds of millions, perhaps billions of dollars were generated for Gulbenkian.

The TPC was rendered defunct on December 12, 1961. That's the day the Iraqi government enacted Law No. 80, which expropriated (took away) 99.5% of all oil concessions in the country, nationalizing Iraqi oil and ending all for-profit private oil business in the region.

As we mentioned a moment ago, Calouste Gulbenkian died on July 20, 1955 at the age of 86. In his remaining years he split his time between a suite at the Ritz in Paris and a large estate in Lisbon, Portugal.

He spent the decades between the late-1920s and his death collecting 5% royalty checks. Those checks made Calouste Gulbenkian one of the richest people on the planet.

At the time of his death, Calouste Gulbenkian's known fortune (he left unknown amounts in trust to family members) was estimated at…

After adjusting for inflation, that's the same as around $9 billion in today's dollars.

Upon his death, the majority of his vast fortune was used to establish the Calouste Gulbenkian Foundation.

According to its 2021 prospectus, today the Calouste Gulbenkian Foundation has around $4 billion worth of assets under management. That makes it one of the 40 wealthiest philanthropies on the planet, with roughly the same assets as the Bloomberg Philanthropies and the Rockefeller Foundation.

The museum features masterpieces from many artists you've heard of like Renoir, Rembrandt, Degas, and Rodin, as well as one of the most impressive private collections of art from the ancient middle east, China and Japan.

That's the story of Calouste Gulbenkian, A.K.A. "Mr Five Per Cent." Hopefully when you die you have an equally enriching nickname!